It’s not the photo that counts 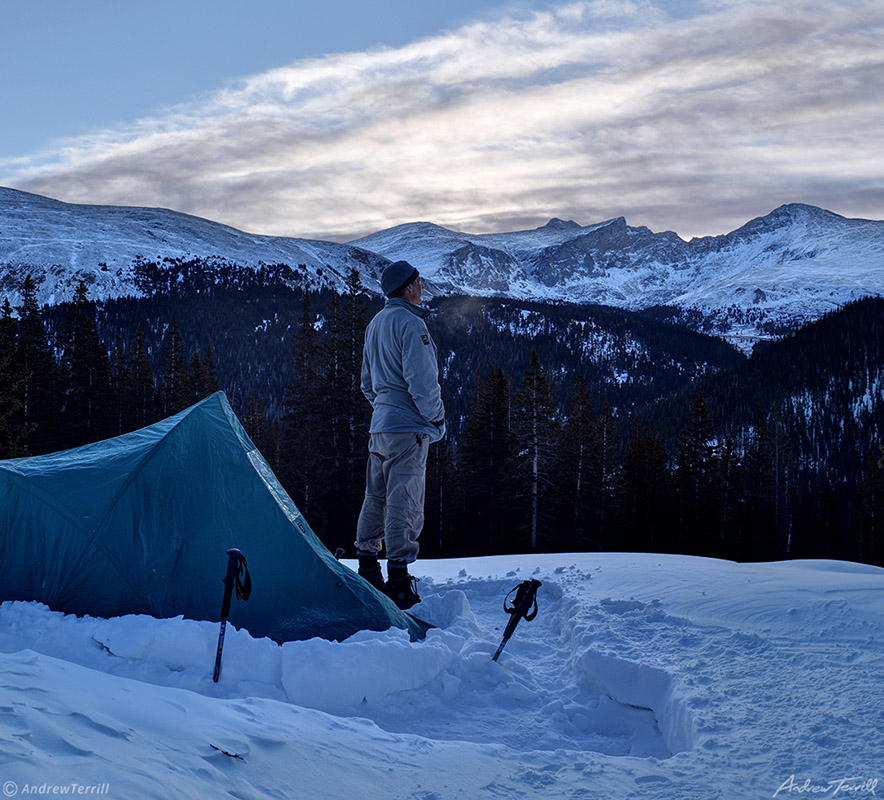 I WAS ON assignment this week… well, on speculative assignment. A photographer friend kindly suggested my name to a prominent Colorado magazine. They were looking for photos to illustrate a ‘how to’ feature on winter camping and wondered if I had any.

Sure I did – plenty. Far too many perhaps. Snow camping shots from Norway, the Alps, the Pyrenees, Scotland, the Lakes, North Wales, the Pennines, the Canadian Rockies, Central Europe, Alaska… but, what’s that? Oh, of course – only Colorado shots were needed. Specifically, did I have any of the Brainard Lake area or Guanella Pass?

Erm, not yet. But by Monday next week? Sure!

So off I went, bound for the hills, cheekily labeling it ‘work’. It convinced me, anyway.

First stop was Brainard Lake, fresh on the heels of a passing storm that dumped 12 inches of snow on Golden. Turns out, I should have stayed in Golden. The drive was treacherous, the roads slick, and only the promise of an Indian Peaks winter wonderland kept me going. The number of abandoned vehicles pitched at interesting angles along Highway 93 between Golden and Boulder was thought provoking. Steady now, steady…

A careful hour and forty-five minutes of tentative motoring saw me safely to the trailhead, and then a glorious two hour snow-shoe through snow-plastered woods saw me reach the location I’d chosen for my staged winter camping shots. It was a fine spot – an elevated spur offering a clear view of the Brainard Lake skyline. Except, it wasn’t a fine spot on this occasion, and there wasn’t a clear view. Mountains? All I could see of them was the merest hint, and in their place was flying spindrift and swirling cloud. The reason? A sudden rising wind that howled in from nowhere and whipped all the snow off all the trees and dumped it straight on top of me. Honestly, as locations went it sucked.

Tail between my legs I scurried back into the forest and found a spot where the last vestiges of snow still clung to the trees. After stamping down a good platform I pitched the tent (borrowed from a friend as my ancient, well-worn tent suggests ‘how not to’ instead of ‘how to’). The forest shot wasn’t quite what I wanted, and it could have been taken anywhere, but it was the best I could do. Of course, once I snowshoed back to the trailhead the wind dropped and the skies cleared. Navajo Peak and Mount Toll were revealed, rising sharply into a deep blue sky. But it was too late now – they were too far away for the photos I’d planned. It was typical, just typical!

It was two hours later and only six miles from home that I finally managed a few reasonable camping photos. They were taken atop the still snow-decorated White Ranch Open Space where clearly the wind hadn’t blown at all. I’d completed a full day of travel, 8 miles of hard snow-shoeing, squared off into a blast of wind, received a face-full of spindrift, and the best images came a few minutes from home. Funny old game this photography lark!

Still, watching the moon rise above ‘camp’ was magical. Nature’s reward for all the miles covered. I slowed down, stretched, breathed out. Yes, not so bad after all.

A few days later I was back on snowshoes again, heading uphill towards a favorite side valley that overlooks Guanella Pass. The plan this time wasn’t to stage a camp but to camp for real. Great plan! The forecast called for strong overnight winds leading to a predicted wind chill of minus thirty Fahrenheit, but the moon was full and the skies were supposed to clear. It would be perfect. And it was less than a mile on foot from the trailhead to my chosen spot. Easy.

But I hadn’t reckoned on the worst snow I’d ever tried snowshoeing through. It was diabolical. Less than a mile? It took over two hours.

I kept sinking to the top of my thighs. Occasionally I’d find a crust to creep across, but more often I’d plunge through hidden trapdoors and then pitch forwards face first. Or back first, to lie stranded like an overturned tortoise, weighted by my full pack. Each step took between five to ten seconds. Here’s how it went: one, struggle to pull snowshoe out from the deep snow that had caved in and buried it. Two, lift it upwards, place it gently down, ease my weight onto it. Three, wonder if the snow will offer support. Four, plead with the mountain gods to please please please grant me supportive snow. Five, feel the snow firm up, believe it will hold, but then – nope, dammit, discover it won’t! Six, down the snowshoe sinks into a sugary abyss – and down I sink with it.

By the time I reached camp daylight was fading. I grabbed a few quick photographs but my heart wasn’t in it. It was late, windy, and biting cold. I doubted the Arctic ambience was what the magazine photo editors were looking for. This wasn’t inspirational. The cold blue scene would probably put wannabe winter campers off for life.

The temperature plunged after nightfall, and by midnight my small keyring thermometer displayed minus five Fahrenheit, minus twenty Celsius. INSIDE the tent! Which was fairly nippy I have to say. Carefully putting all my winter coping tricks to work I managed to stay warm enough, but I lamented my decades-old-not-quite-good-enough gear. And I lamented that I wasn’t sheltering in an igloo. Or even a quinzhee. Snow is a great insulator. Tent walls are not. I thought to myself: there are only so many times in a life one needs to do this…

And I thought about the prospective magazine feature: ‘Ten Top Tips For Camping In Winter Cold’. Tip number one: don’t. Go rent a heated cabin instead.

But then the moon rose, and it was spectacular – a brilliantly bright orb bursting through clouds to shine silver on Mount Bierstadt and the forested valley below. It was for this that I’d come. I pulled on my layers, braved the winds, fixed my camera to the tripod, and did my best. And then I stood for a while, lost to the moon-silvered realm, awash in awe, thinking: there are only a few moments in life like this… moments only a few get to see, and fewer still are able to treasure.

A moment dripping with magic.

When dawn finally arrived I passed on the option of taking sunrise photos and didn’t leave the tent until the sun had been back at work for a good long while.

How many winter camping photos does a magazine need anyway?