To Vegas with Igloo Ed

WINTER HAS RETURNED to the foothills of Colorado’s Front Range, as it so often does this time of year. Mid April? Spring? Hah! With flakes wafting down and cold nipping at one’s exposed digits you’d barely know it.

Which made it the perfect time to share a night in the hills with Igloo Ed.

Igloo Ed is a one-of-a-kind mountain man. I’ve known him in person for roughly six years – after hearing about him for many years more. Usually, the ‘hearing about’ was in relation to igloos, as one might expect from someone with a name like his. Photos of the remarkable igloos he builds and sleeps in were forever popping up on my social media feeds. Intrigued (and slightly in awe), I finally reached out to him (in late 2015 I think), and with characteristic generosity Igloo Ed invited me up to Rocky Mountain National Park to teach me how to build an igloo myself. It was an opportunity too good to miss.

Igloo Ed has been about a fair bit. He’s spent decades undertaking long coddiwhomples in the Rockies, and as a result probably knows certain corners of the high country better than anyone else alive. (If you’re wondering what a coddiwhomple is, look it up! And yes, it IS a real word. It describes an approach to mountain wandering that Igloo Ed has perfected.) Anyhow, after so much walking, skiing, snowshoeing, (and coddiwhompling), in all seasons and all weathers, Igloo Ed has built up a mass of knowledge and experience, and happily also possesses a rare willingness to share it. As I followed him into the mountains on that first trip I felt fortunate beyond measure to be the beneficiary of both his company and wisdom.

I’ll write a blog about that first igloo trip some other time. But I think it’s fair to say it changed my life. (I reckon Igloo Ed has changed quite a few lives in his time, and always for the better.) The igloos I’ve built since, using Igloo Ed’s ingenious ICEBOX® tool, have played a massive role in some of the most memorable winter mountain experiences I’ve had. And the handful of shared miles with Igloo Ed since then have also added extra richness to my mountain travels. But, shamefully, a couple of years have passed since last I walked with him, and the plans we’d made to remedy this had been thwarted by fate, usually at my end. It was never Igloo Ed’s fault that a mountain trip didn’t happen. He is always up for an adventure.

But the time had finally come – Igloo Ed didn’t hesitate when I asked him if he wanted to share a night out, and for once nothing scuppered our plans. And so, into the snowy hills we tramped. Unusually, it wasn’t to build an igloo this time but to sleep in the Appalachian-style lean-to I’d visited three weeks earlier. It may not have been Igloo Ed’s usual style of winter accommodation, but he’s never slept in an open-sided shelter before, and unlike some folk of a certain vintage he was game for trying something new.

Snow was falling gently as we set off along the trail. Six inches of fluff already lay on the earth and trees, and the spring conditions from the preceding weeks might never have occurred. There was no-one else about and the landscape was hushed – but we weren’t. Igloo Ed never runs out of stories, and his offerings as we coddiwhompled uphill were as interesting and humor-laden as any he’d told before. Speaking softly, he entertained me with tales of his early explorations in Colorado back in the early 70s. As usual, I learnt things about Colorado I’d never known before. And I was powerfully impressed by Ed’s honesty – at admitting to mistakes he’d made during his formative outings, and at sharing the insights learnt from them. Not everyone likes to own up to mistakes for fear of being judged. But something about Igloo Ed makes judging impossible. His open-ness and trust feel like gifts.

Distracted by the company, I felt no effort during the hike, just pleasure from sharing the snow-softened foothills. When we arrived at the lean-to it looked much as it had when I’d stepped away, almost as though I’d left just that morning, not three weeks earlier. Admittedly, the snowpack wasn’t as deep, but there was more snow hanging on the trees, and the dry cave made by ‘three walls and a roof’ looked just as welcoming. Igloo Ed seemed happy by the first sight of it, although it clearly wasn’t as accommodating as an igloo. Igloos are insulated and feel surprisingly warm inside. You can sit up in them and feel as comfortable as though you’re in a hotel, as though it’s a warm blanket wrapped around your shoulders not a home of compacted ice crystals. And igloos feel notably secure – as impregnable and sheltering as a castle. In comparison, the lean-to was open to the cold, and it lacked furniture of any kind – not even a bench to sit on. But I don’t believe I’ve ever heard Igloo Ed complain about anything, and I didn’t hear any complaints now. He settled in contentedly, and the light-hearted stories continued.

Time passed; gentle companionable hours. The pace was slow, but it never felt slow. Igloo Ed’s yarn-spinning continued, extending to tales about the crows he has befriended over the years – my favorite of the stories he told. I mean, making friends with birds is not a typical conversational subject is it? But a story about taking time to build a relationship with a bird, and then the description of the moment when even the bird realizes it is having a conversation with another intelligent being – well, that was something special. I don’t think I’ll ever look at crows the same way again.

Snow was still falling as darkness descended. The lean-to began looking a little sad and soul-less as the frigid night pushed blackness into its dusty corners. But Igloo Ed found a way to transform the wooden shelter as miraculously as he transforms snow into comfortable palaces. This time, it was a piece of technology that did the job, not careful shoveling. He reached into his pack and, like a magician, pulled out a three-foot long battery-powered strip of LED lights. He strung them up beneath the rafters and switched them on.

As twenty-eight tiny lights sparkled and gleamed in the blackness the spartan lean-to suddenly became a gilded palace. We sat beneath the lights and stared upwards. I was entranced. This wasn’t how I usually lit my mountain nights. Oh the glitz, the glamour!

A moment of silence followed. A moment of appreciation. And then Igloo Ed made a delightful observation…

And indeed it was. Only better. By far. 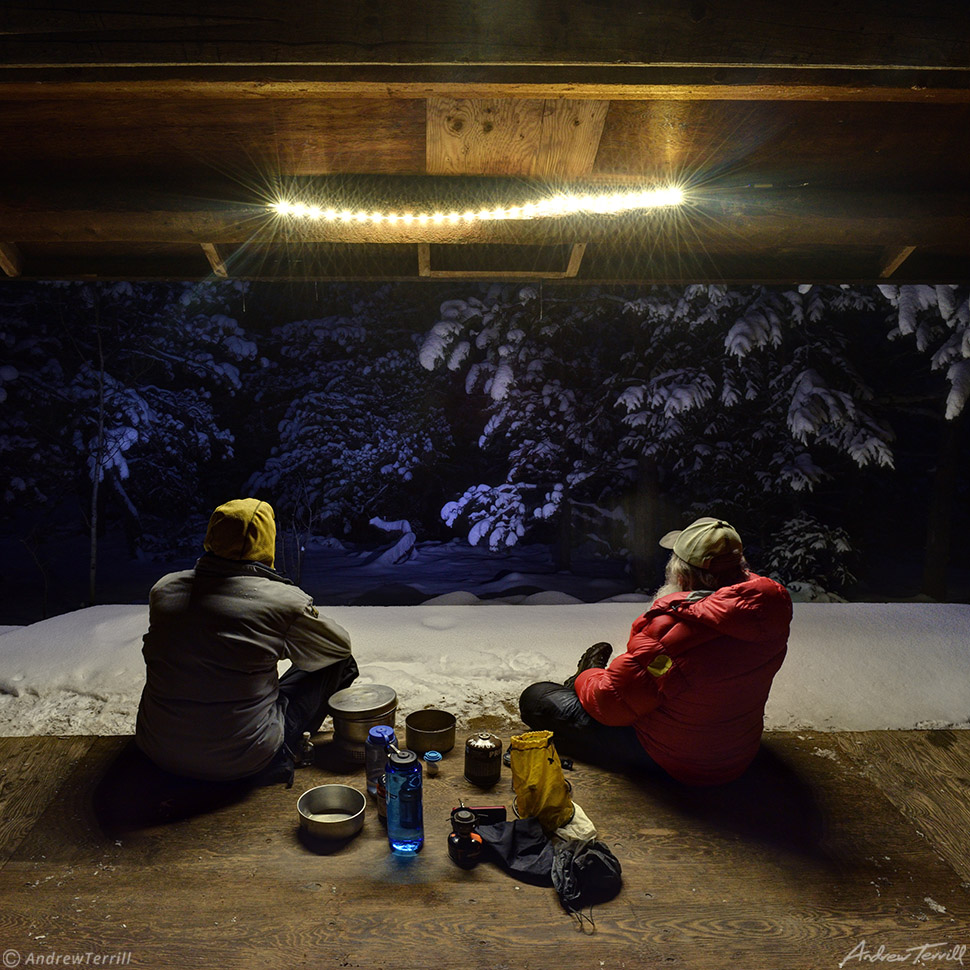 I could write more about the night that followed: the booze, the gambling, the debauchery, the razzmatazz. The story telling. But perhaps I’ll leave it there.

After all, what happens in Vegas… 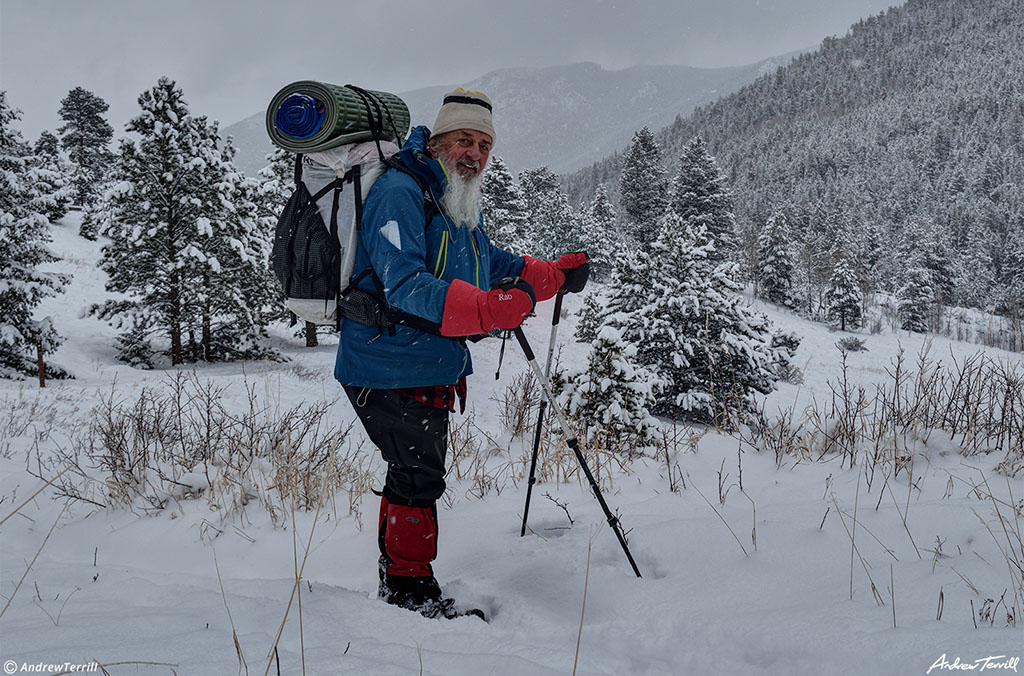