THE FORECAST MIGHT have been off-putting. The scientists up at NOAA were predicting severe thunderstorms in the mountains, not as a possibility but as an absolute certainty. Lightning was likely, torrential rain extremely probable, and even flash floods were on the cards. From the look of it, rain was going to be falling from the moment I stepped into the hills until the moment I left them.

Which was why I went. 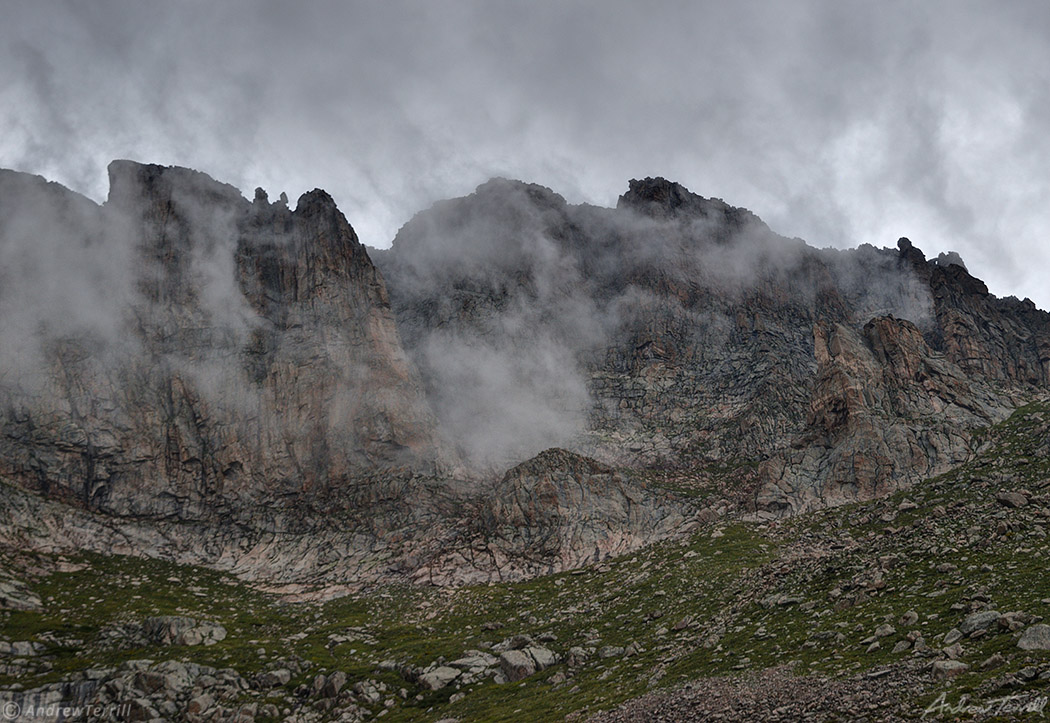 It’s been warm down in the foothills, as one might expect for late July. I’ve only slept out once over the past few weeks, a sultry night in a canyon where the night air was too hot to sleep in my sleeping bag. Sleep was only possible on top of the bag, and even then, barely.

Plus, I’ve been away in Arctic Norway. I’ve been lost, completely. I’ve been working on my second book, part of it set north of the Arctic Circle, and I’ve fallen hard a second time for the Arctic and its wild weather. Stepping away from it has been difficult. Sure, I have managed daily trail runs – sweat-fests beneath a burning Colorado sun – but the interludes in nature have been short. Plus, they haven’t matched the Arctic moments that I’ve been reliving. What I wanted was ‘weather’ – the worse the better.

And then I saw the forecast.

Family commitments meant I didn’t reach the trailhead until noon – the time of day that summer storms usually start firing up in the high Rockies. But luck was on my side, fortune favoring the fool perhaps. When I set out, conditions were still dry, although who knew for how long. Dark clouds were massing over the deep cirque at valley’s end that was my destination. I hoped to camp up there, above tree line, not down in the forests. But would I make it to shelter across exposed ground before lightning arrived?

Determined to make as much distance as I could, I attacked the trail with a runner’s mindset. Normally when backpacking I prefer to saunter. I like to merge into nature and connect with it in a specific way – a more peaceful way than running usually allows. But this time I paced up the trail with what felt like a twenty-year old’s vigor and, honestly, it felt good. Whatever endorphins were being released by the exercise were doing their job. Plus, the reaction from other walkers was entertaining. I saw surprise from day-hikers at being overtaken by a heavily-laden backpacker. It was a fun pay-off for the ridiculous amount of effort.

A mountain lake sits in a bowl a half-mile from my final destination, and when I reached it I received an even funner pay-off for working up a sweat. Becoming too hot was easily remedied with a quick swim in water that was, until recently, snow. Tiredness and sweat vanished an instant. Rejuvenation is too mild a word for the feelings that followed! I reached the lake, ignored the thunder now rumbling, and after a few seconds of immersion in the bracing cold felt as though I could fly up the trail all over again.

Camp was pitched twenty minutes later in a sheltered spot beside a house-sized boulder, a spot I’ve camped in before (although you’d never know it). I set up my 24-year old North face tent, curious to see how water-tight it would remain when the forecast deluge arrived, and also my tarp, for cooking in once the storms hit (and also for throwing over ‘Auld Leakie’ if the tent lived up to its old name). I didn’t have long to wait to find out.

The storm erupted with minutes – torrents of rain, bright flashes, and rolling thunder that echoed about the granite rock faces. The violence was thrilling. It sparked awe and appreciation in equal measure. July’s heat was quickly forgotten. Even Arctic Norway faded away. I was soon lost to the weather that I’d come for, enjoying it with all the senses. After weeks of smoke from far-distant fires across the drought-stricken American west, the clean scent of damp mountain air was a gift to savor. I wished whole-heartedly I could send the moisture to where it was needed most.

By late evening the storm eased up, something I hadn’t expected – the forecast had predicted rain all night, and all the following morning. Leaving camp, I sauntered slowly about the wild cirque and upper valley with no destination in mind, more than compensating for the earlier speed hike. My feet and trousers were soon soaked, but the earthy smells, the calls of marmots and pikas, and the sound of rushing creeks and waterfalls, meant I didn’t notice. For a few minutes the sun even came out, bathing the land in a warm glow. And then mist began forming on the surrounding mountains, drifting in veils about the crags and towers, thickening and dissipating, and then forming all over again. The drama of it felt like a reward for my show of faith – for hiking into the mountains when the forecast was so bad. 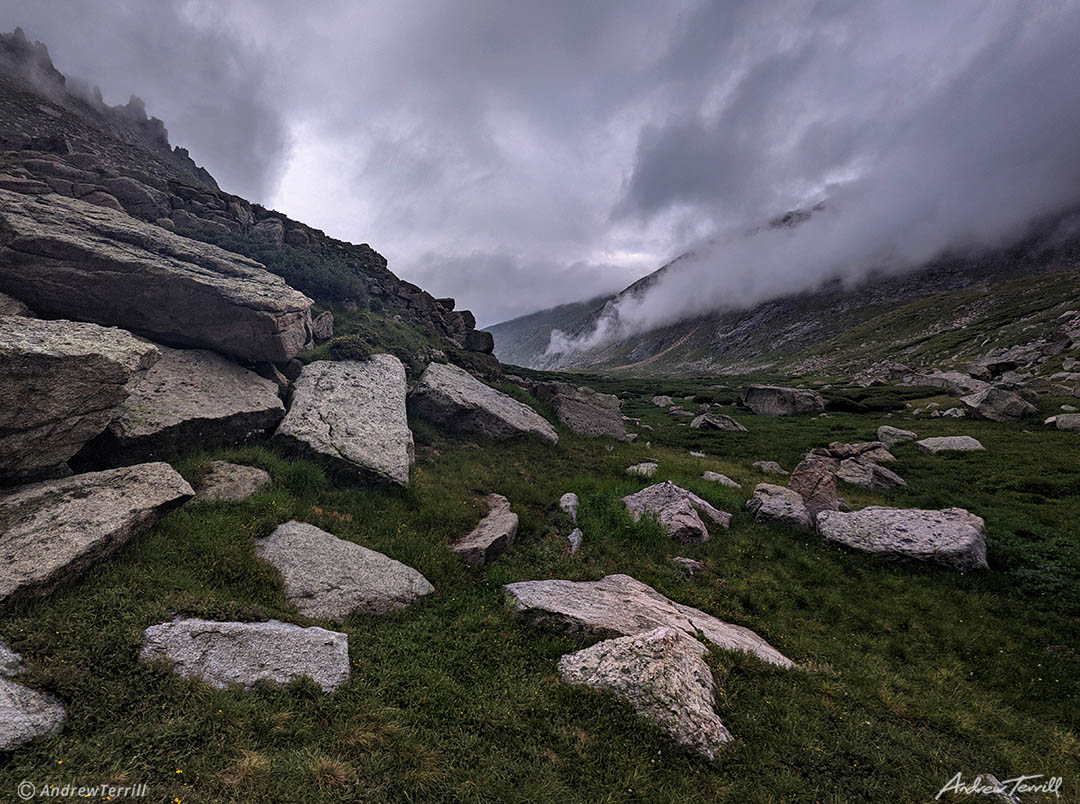 The storms returned after dark, and they hit with even more violence. More lightning, louder thunder, rain that could barely have been heavier, and fierce, gusty winds. My tent hadn’t fared well during the first storm – rain had splattered right through it, proving what I’d already known: that using a tent continuously on a long walk across Europe in appalling weather was more than most tents could handle! But happily, it still works in winter, and it remains too much of an old friend to throw out. And it worked now on this rain-lashed Colorado night – at least it worked with my $20 tarp thrown over the top! Despite the volume of the storm – a sound like water spraying out a hose – I eventually slept… and slept well.

It should have been raining at dawn. But instead the dawn sparkled. The sun was out, the land was freshly watered, and mists came and went, sometimes filling the valley with fog, sometimes hanging about the mountain walls, sometimes vanishing altogether. On the walk out I stopped once again at the lake for some more cold water therapy, for some high country rejuvenation, for a taste of the Arctic, and basked afterwards in the hot sun like an extremely happy marmot.

By the time I stood up to go clouds had reformed, rumbles could be heard – the next deluge was coming. Once again I raced down the trail, and after the swim it didn’t feel like effort. I felt thirty years younger, reinvigorated by the immersion I’d just enjoyed within wild nature. The fast-paced walk felt like a celebration of everything I’d found.

Looking back now, perhaps it seems shamefully tone-death to ‘celebrate’ bad weather the way I do in this blog? After all, bad weather tragedies around the world only appear to be growing worse. So many lives have been changed and lost.

But there IS a very good reason why I still treasure bad weather trips like the one above. For one thing, I live in a region in the American west where fire season has lengthened and rain is always needed. We rarely get enough here, and when we do it IS something to celebrate. I treasure rain more now than I ever did growing up in London or walking in Britain’s hills.

For another thing – and this is the main reason – I think it is essential to get outside into bad weather on a regular basis, to experience its reality, to remind ourselves of the natural world we live within. Hidden away, we can too-quickly forget our place, but remembering it can change our perception of the world, and through that improve our relationship with it and our behavior toward it.

Plus, bad weather can give rise to one of the most powerful mood-enhancing drugs of all: awe. To my mind, awe is an essential ingredient to living a happy, fulfilled life. Yes, there are many other ingredients, but we need awe to shift our focus away from the small stuff, the busy little details that often dominate our day-to-day lives. Awe can stretch our horizons, take us out of ourselves, close down our analytical brain and give us a break, a real mental holiday. To lose oneself in awe can be even more rejuvenating than a swim in an icy mountain tarn.

As I’ve written before: ‘A day without awe is a day wasted.’ I so strongly believe this. And I bet those of you who have experienced awe feel the same way.

FINAL NOTE: I’ve deliberately not given the location for this walk. Although it is a popular location, and some readers may recognize it, certain areas described remain little-visited and show no evidence of other people or damage from trampling feet. If you visit, please-please-please step carefully. And encourage others to do the same. Let’s keep this place as it is pictured: wild as nature intended. Thank you!

PrevPreviousBook Review: Along the Divide by Chris Townsend
NextBook Review – The Nature Fix by Florence WilliamsNext
Scroll to Top