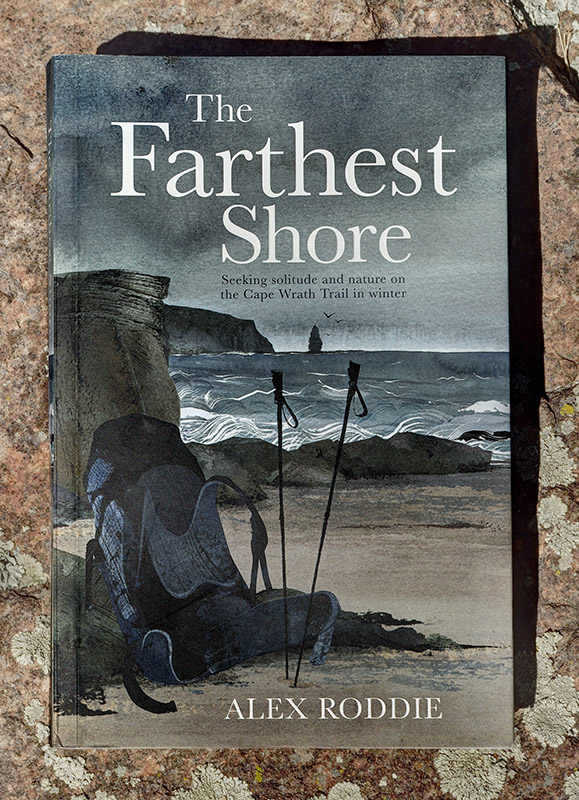 A book that goes one step farther – a rare book of honesty and insight.

The Farthest Shore by Alex Roddie is a rare book. It is rare for several reasons, partly for the journey it describes – a challenging adventure attempted at a challenging time of year – but mostly for its honesty, its authenticity and its insights. It is these three aspects that truly set it apart.

On the surface, The Farthest Shore is a travel narrative that describes a 300-mile walk along Northwest Scotland’s vaguely-defined Cape Wrath Trail. The CWT is arguably Britain’s most difficult long-distance trail. The rough terrain and wild Scottish weather can make it a real adventure, even in summer, the time of year most people attempt it. But Alex Roddie went in winter, a season of short days and savage gales, a season when he was most likely to have the trail to himself.

It was to have the trail to himself, to find solitude, that Alex began this walk. Solitude was something he sensed his life lacked, and not just physical solitude but more specifically digital solitude. Alex realised that the ‘tidal tug’ of the internet – of social media and endless emails to read and respond to – was taking over his life. It was leading to stress and anxiety, becoming a profoundly negative thing. And so Alex took to the CWT to temporarily escape it, to carve out space to reflect on how the chaos of the digital world was affecting him, and to see if answers on managing it could be found. 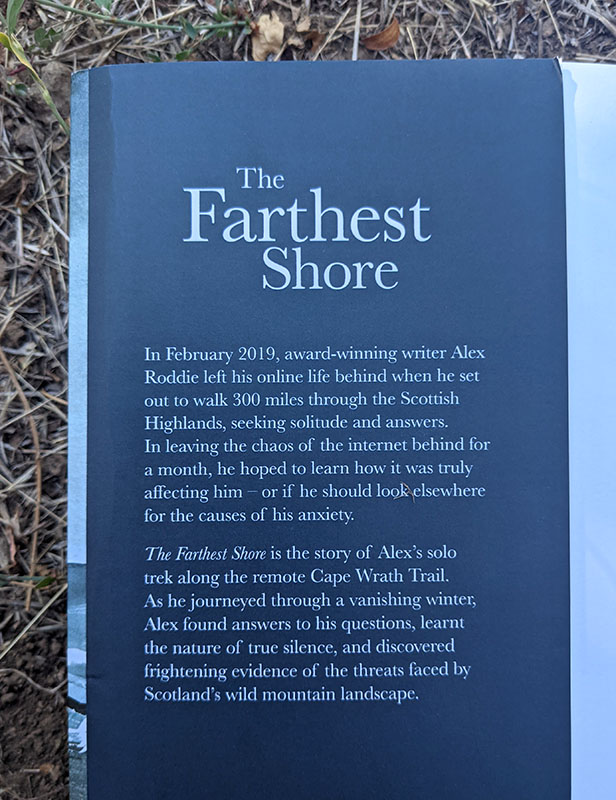 The book begins with a difficult life situation that many of us will encounter, and it is written with great sensitivity, and even beauty. The situation is emotional, and heart-breakingly real, and it sets the scene for the rest of the book. It puts life into perspective, but it is the sheer honesty of the way Alex tells it that grabs attention. Alex reveals himself, laying bare his thoughts and reactions – an uncommonly brave thing to do. But for us readers, it pays off. We now know we’re holding a book of value that is worth reading, a book that won’t be shallow, a book that will be truthful, a book that will be real.

That honesty and realness permeates the entire manuscript. There is no pretense here as the journey unfolds. Scotland’s landscapes aren’t painted romantically, but realistically. We get to see the Highlands as it really is, and not as the perfect imaginary wilderness we might prefer it to be. Alex’s actions and choices are presented in the same way – not in the best possible light but with truthfulness. Alex reveals his own flaws, anxieties, insecurities and inconsistencies. It makes him extremely relatable, and it is this rare open-ness and truthfulness that plays a large part in why The Farthest Shore is such an engaging, enjoyable and fascinating read. 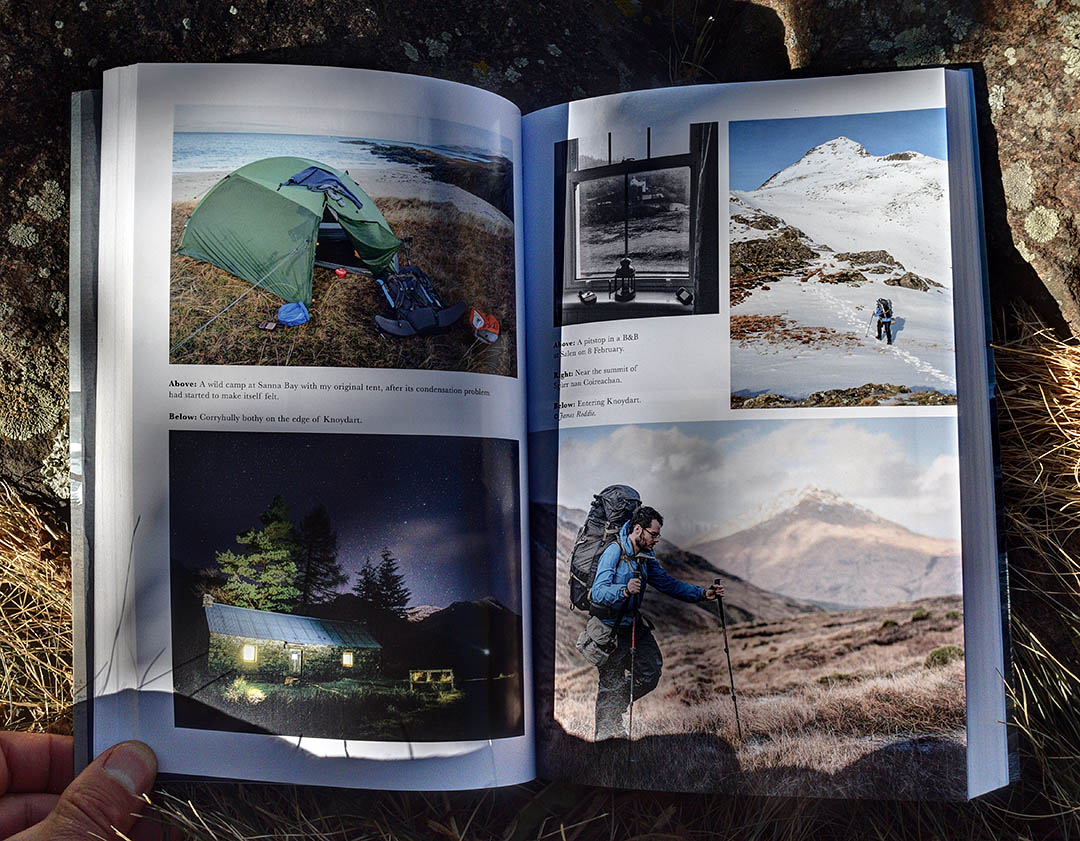 You can tell from the quality of writing that Alex has thought long and hard about every single word and passage in this book. Everything is here for a reason; there’s nothing that doesn’t move the story swiftly forward. Alex has gone deep, as the insights within this book ultimately reveal. There are insights into Scotland and its environment, on the nature of mountain walking, on nature itself and our relationship with it, on connections of many different kinds, on the internet and social media, and of course on solitude. But the most remarkable discovery and gift that this book gives is that these insights aren’t necessarily the insights a reader might have expected. Neither are they the insights Alex himself expected. It is human nature that when Alex began his adventure he had an outcome in mind. But what he found by journey’s end is evidence that this really is a book we can trust.

The Farthest Shore is a beautifully produced book that ticks all the boxes. It is an engaging ‘escape’ – a narrative that truly transports. It paints an accurate portrait of a location, and of the realities of being on a long mountain walk. It inspires a reader to want to go on an adventure, too. And, above all, reading it feels like time well spent, not only because it was a good story well told, but because the world now looks slightly different because of it.

The Farthest Shore was published by Vertebrate Publishing. It is available in many locations, including direct from the publisher HERE. 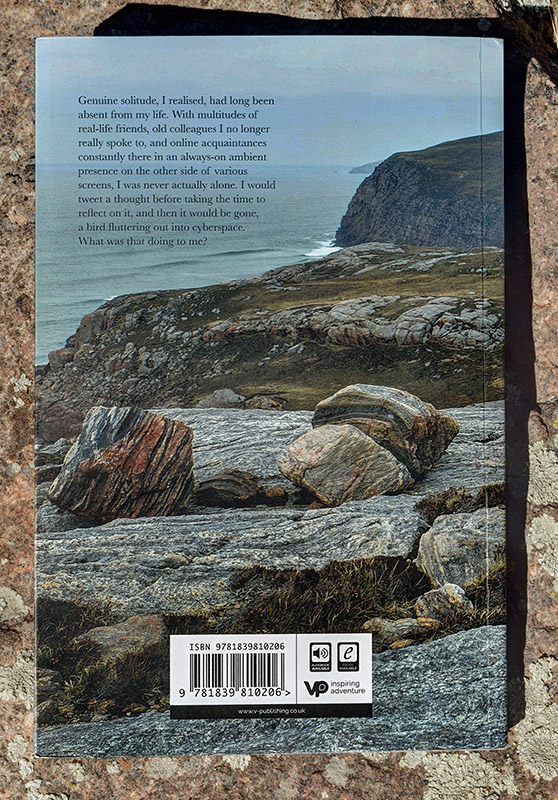