The Storm That Wasn’t In A Hurry

I’M A LITTLE LATE with this blog… but that’s okay: the snowstorm it covers was a little late too. Storm ‘Xylia’ (and who else dislikes the naming of regular weather systems as though they are hurricanes?) trundled through seven days ago, dropping almost two feet of snow on Golden – but for a while it looked as though it wasn’t going to drop anything.

The National Oceanic and Atmospheric Administration (NOAA) forecasters had been analyzing the approaching storm for a week – with the TV forecasters going a little overboard on predicted snow totals – and many of my fellow residents along Colorado’s Front Range had taken heed: rushing out to the food stores on Wednesday and practically emptying them. Then came Thursday (sixty Fahrenheit), and then a quiet Friday (when the storm was supposed to start), and then Saturday (with low clouds and rain for most of the day)…

Would the promised storm never arrive?

By late Saturday afternoon the first flakes were finally settling, and off I dutifully plodded into the foothills, aiming to watch the snow deepen from camp. (As every sane backpacker does!) The start was promising: I sat in Auld Leakie as daylight faded, listening to heavily falling snow. From within my trusty shelter it sounded like ten-thousand tiny mice tap dancing on my ceiling – a wonderfully entertaining sound! But by 8pm the flakes had ceased. Oh, for goodness sakes! Even the NOAA scientists had predicted up to 20 inches for Golden (not quite the numbers over-excitable TV presenters had touted), but it wouldn’t be the first (nor last) time a forecast ‘snowmageddon’ had fizzled out last minute…

But happily, by Sunday morning the delayed storm was finally picking up momentum, and after packing away my snow-covered tent the route home led through drifts already knee deep. Strong winds were rising too, something that had been predicted for Colorado’s northeastern plains but not for Golden – but strong winds, and a blizzard, was what Golden got. Which was fine by me! The walk home – along roads that had drifted over, passed homes that looked unlit, through waves of vision-blurring spindrift – felt thrillingly apocalyptic. I might have been the only person left on the planet. That’s how it felt, anyway.

Storm ‘Xylia’ may have been late getting started, but it finally lived up to the forecast. And the result was a landscape altered, a place re-wilded, a town transported several thousand miles north. Below, are just a few of my favorite photos from the storm: taken before, during, and after. I’ll let the images and captions tell the rest of the story. But I think they hint at one thing: for me, staying indoors in such extreme weather would have been a waste, however odd that seems to some folk!

Friday morning, with the big snowstorm due later that day. Fog clung to the mesa and a dusting of frost and snow hinted at the storm ahead. 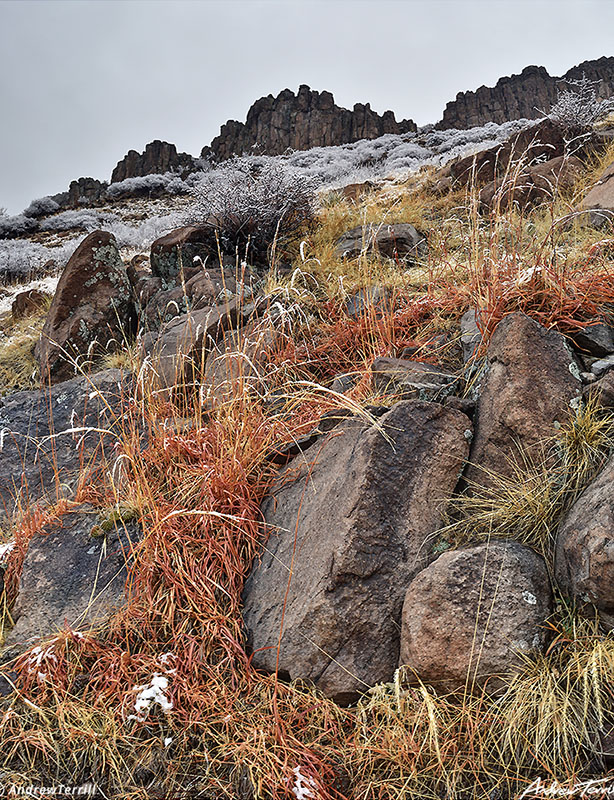 Looking up the rough slope above my home. The contrast between the ice-free winter grasses and the frost-whitened mountain mahogany was exquisite. 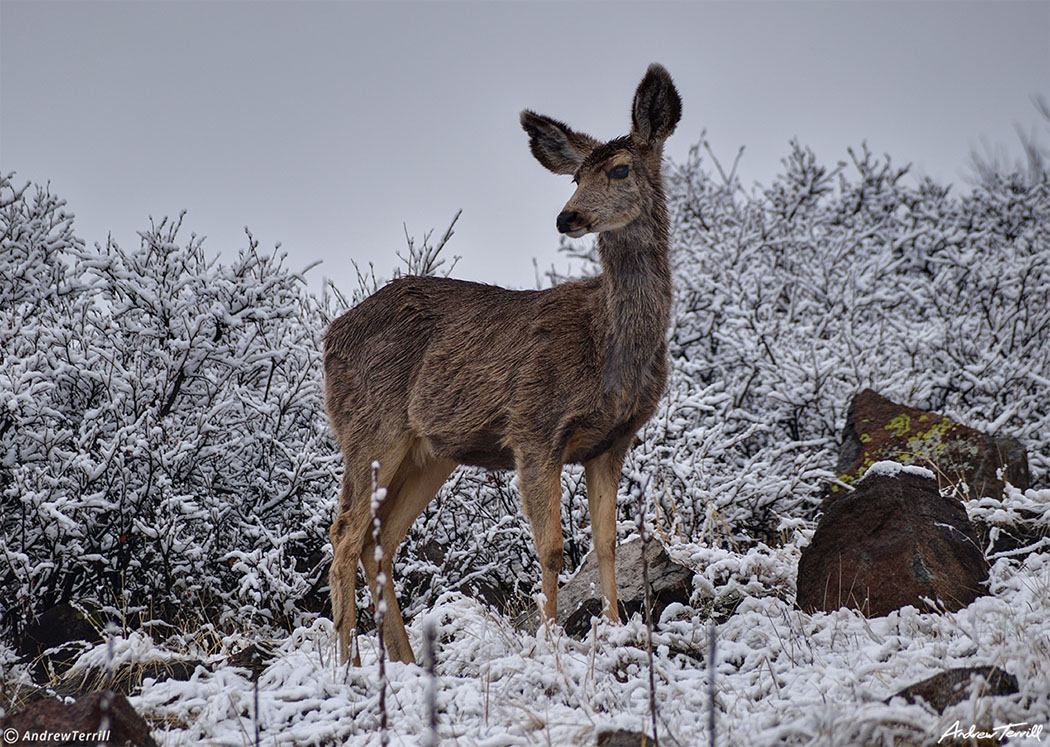 A lone mule deer up above ‘snowline’. I wondered if she had any inkling that rough weather lay just hours ahead. I’d loved to have warned her. 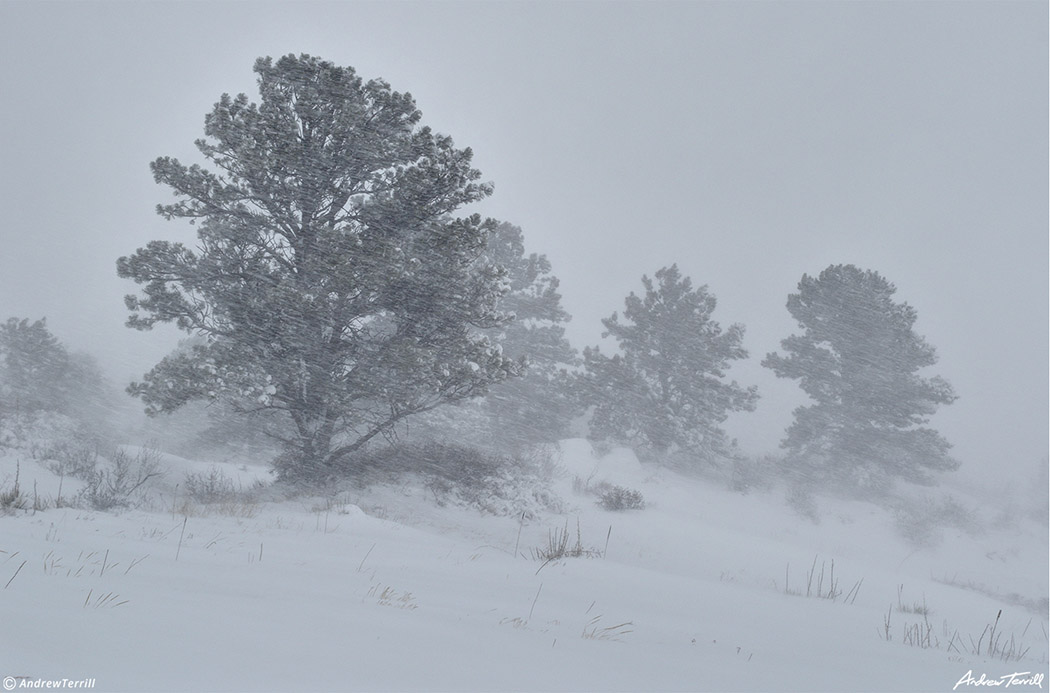 Just a few miles from home, and it felt like an adventure. The wind was fierce, snow whipped by at thirty-miles an hour, and there was little sign of anything but wild nature. Progress through the knee-deep drifts was slow and difficult, but not unpleasant. It touched the senses; it invigorated. It left me feeling young and alive. 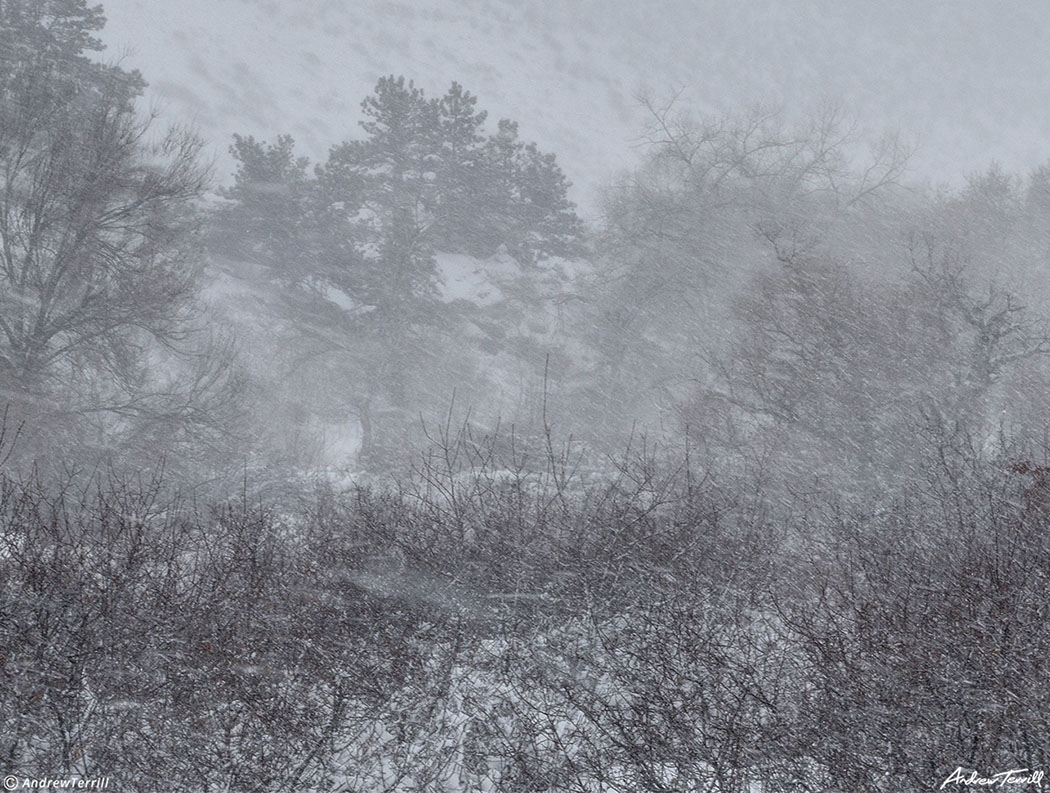 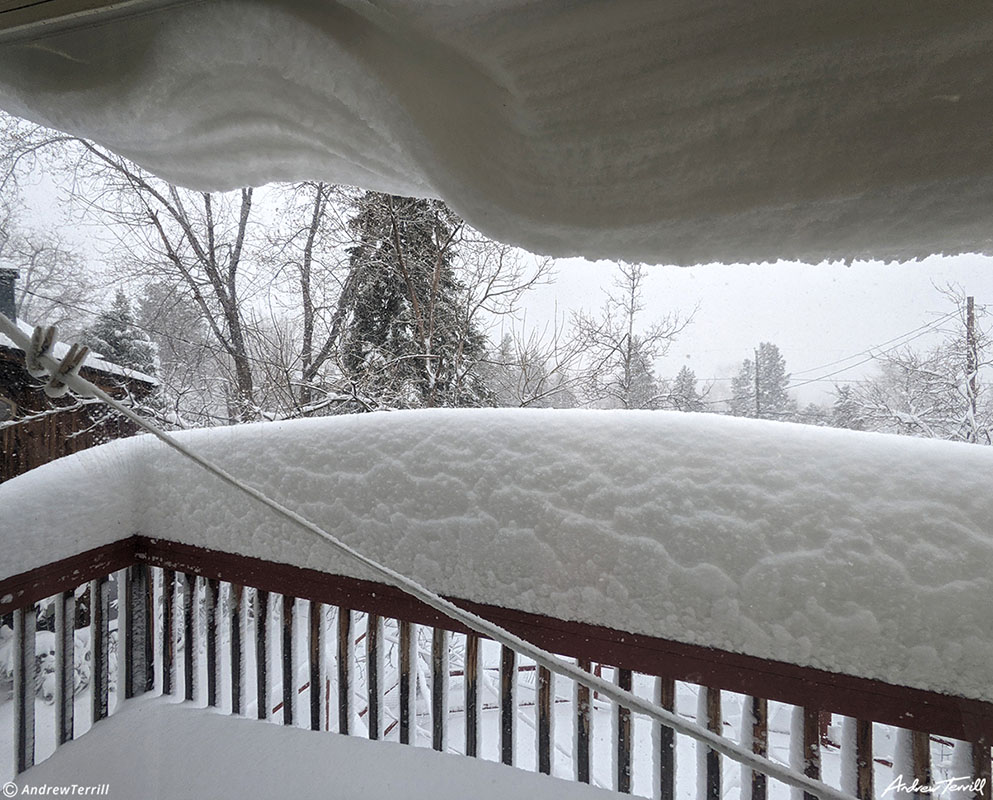 It took a while in the wild conditions to walk the eight miles back home, and part of me didn’t want to arrive – life outside was too much fun. But my family (and neighbors) had needs too! From indoors watching the weather worsen was thrilling too. The view was soon impressive. 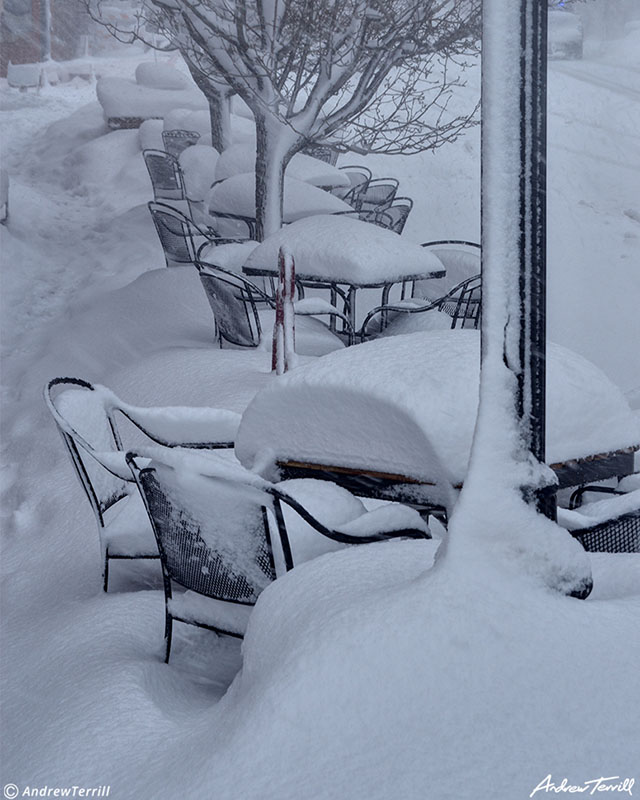 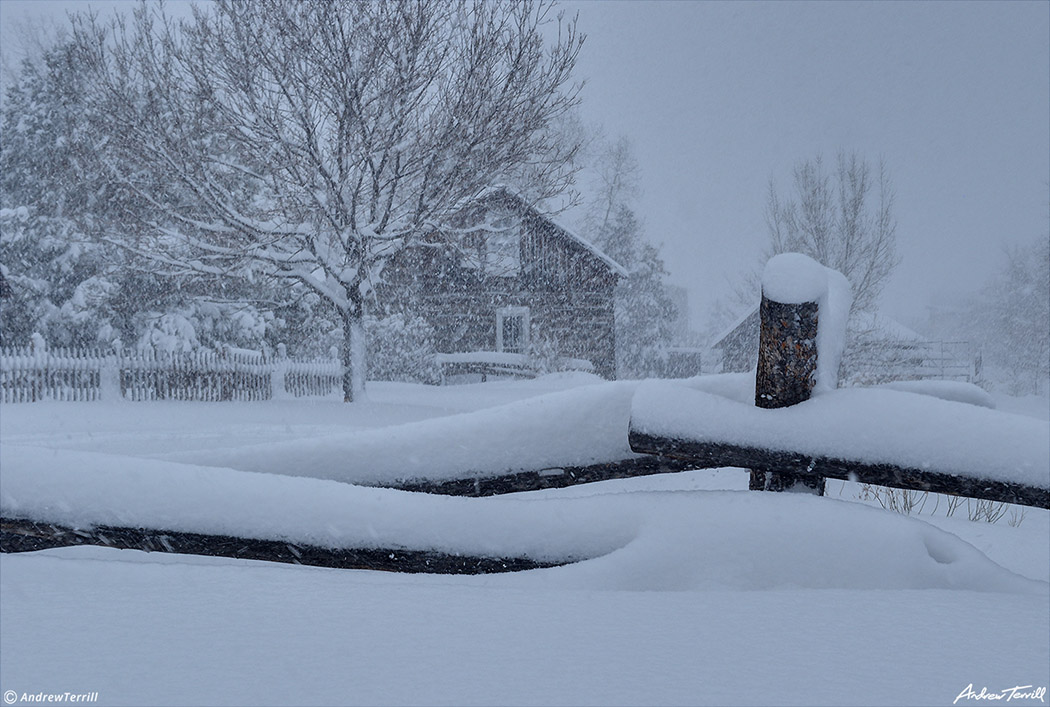 The snow was piling up at the History Park. 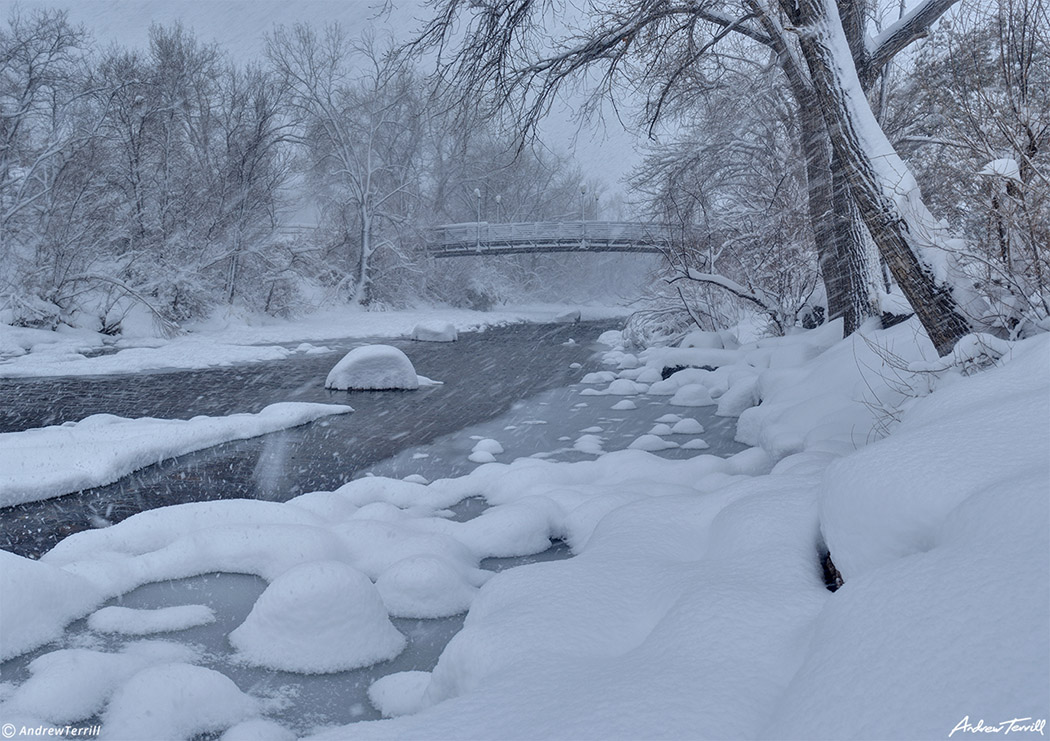 Clear Creek was a spectacularly different place from the quiet location it had been 24 hours earlier. 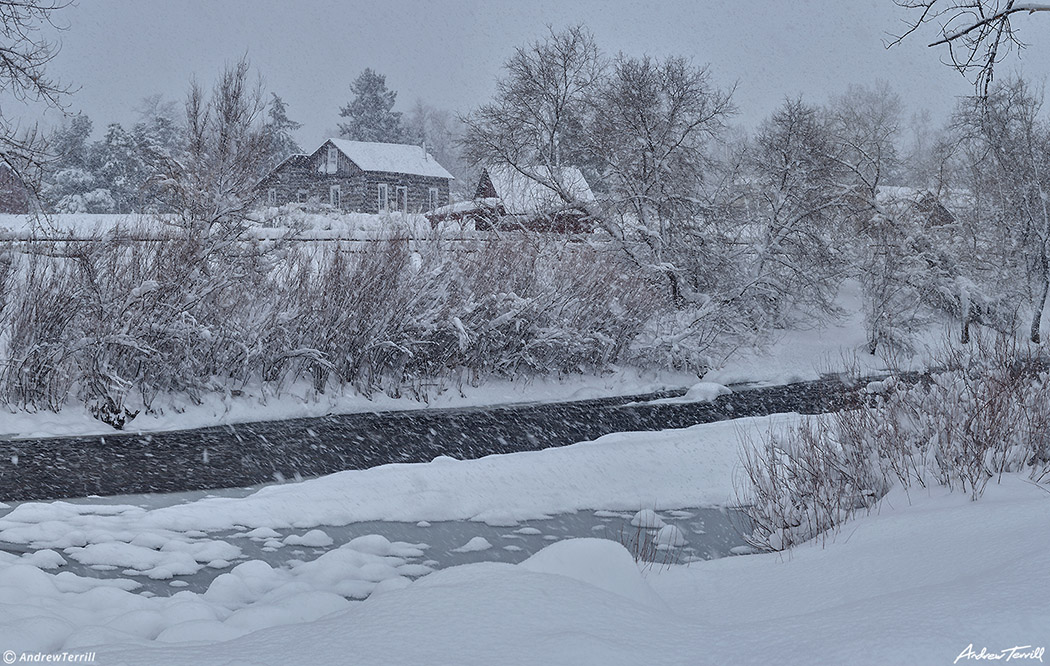 With most of the ever-growing city hidden by the storm, it was easy to imagine pioneer times. That’s one of the (many) things I love about big storms – the opportunity they provide to step temporarily back to simpler times. 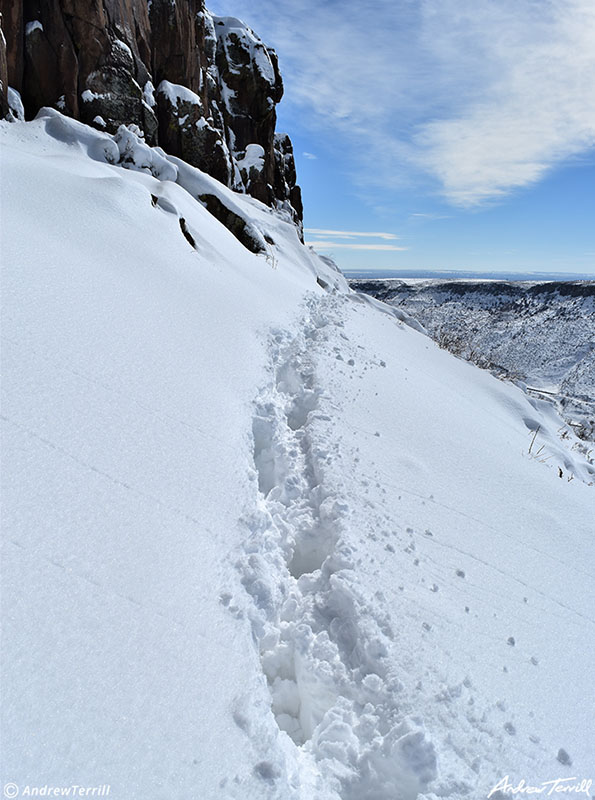 Progress wasn’t easy, that’s for sure! But the day wasn’t especially cold, and wallowing through thigh-deep snow so close to home was the kind of thing I always dreamed about being able to do as a child back in London. These were dream-come-true conditions for a little suburban child! 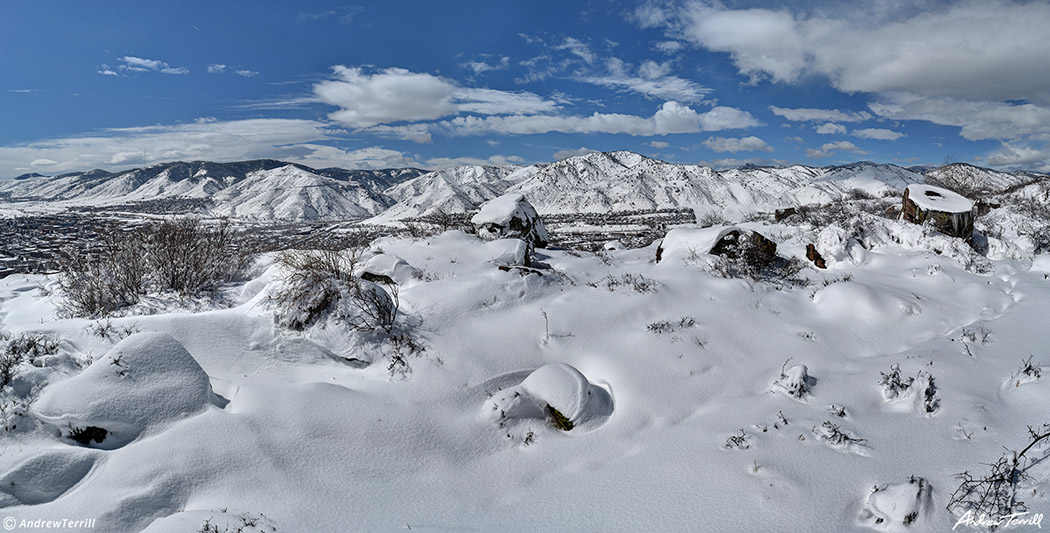 A retake of one of Friday’s photos (earlier up the page). It was barely the same place! 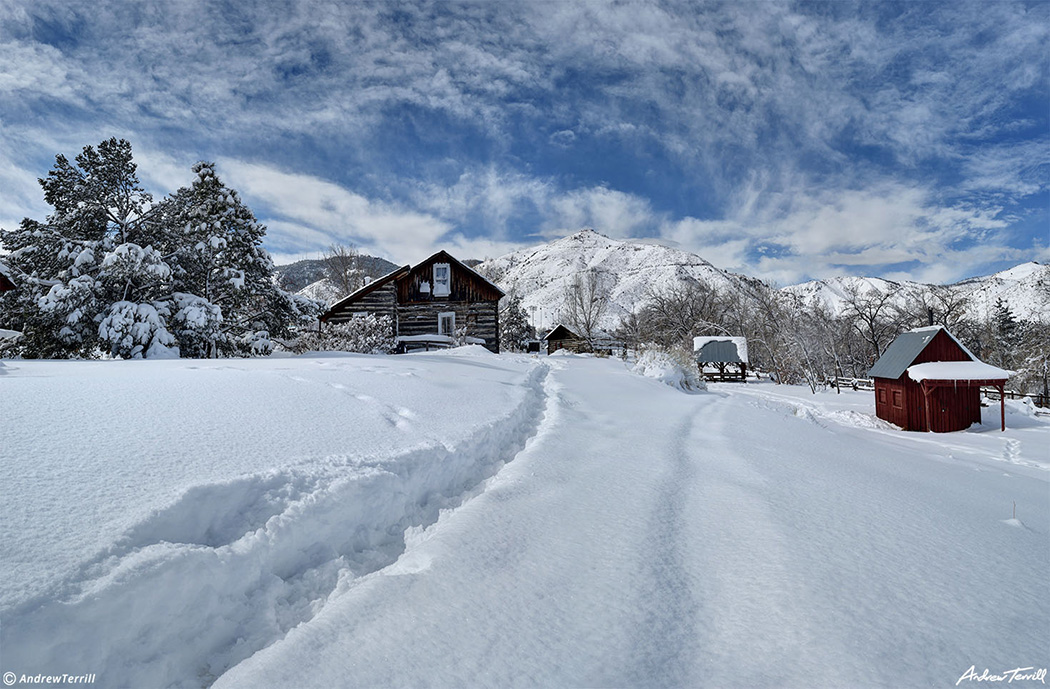 Down in Golden the ever-photogenic History Park didn’t look the same either. 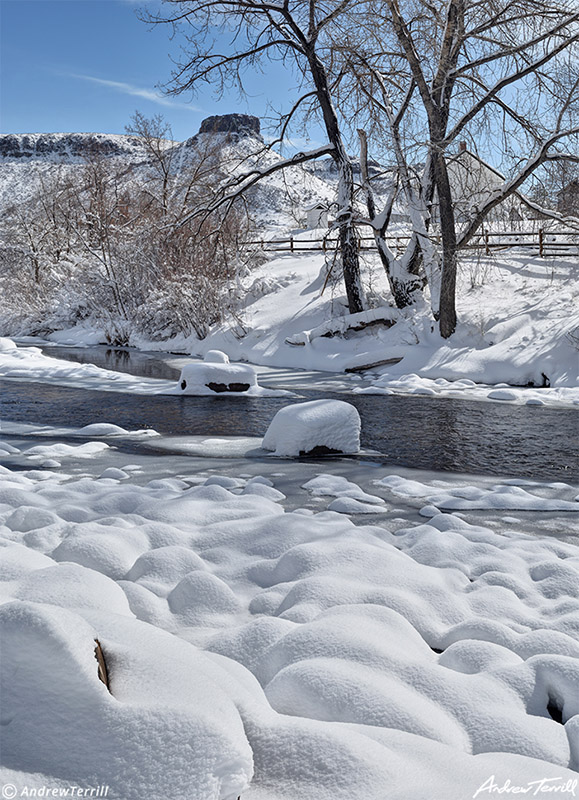 Conditions were a little calmer along the creek. 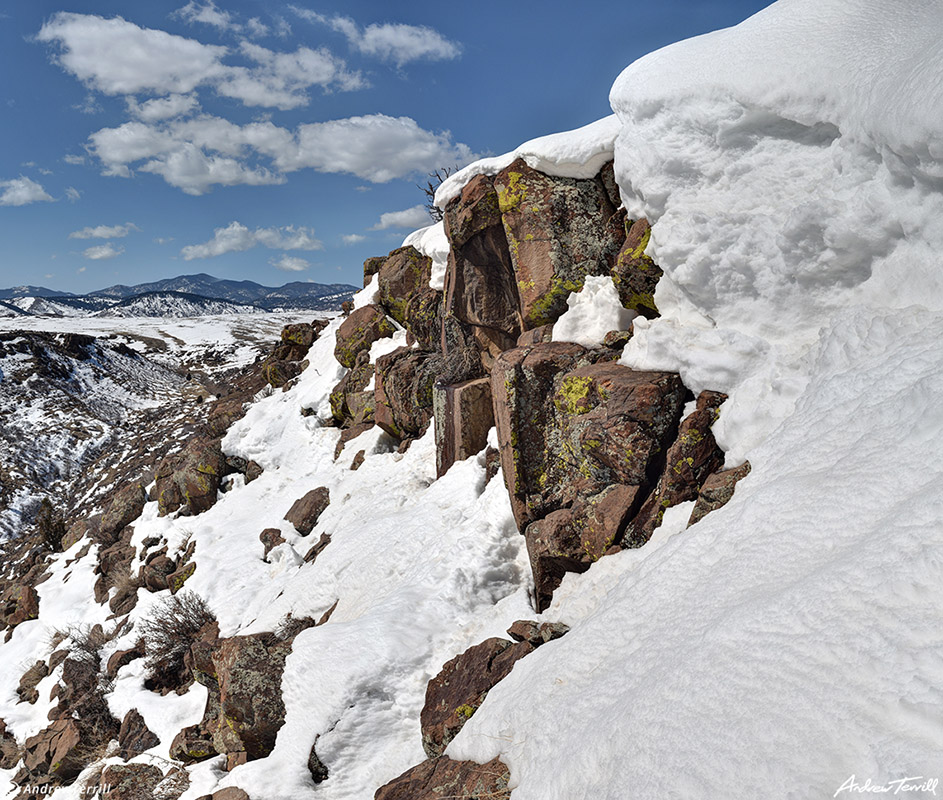 On Thursday, four days after the storm, the temperatures were back into the sixties. Despite the look of the land, it felt like spring had returned. 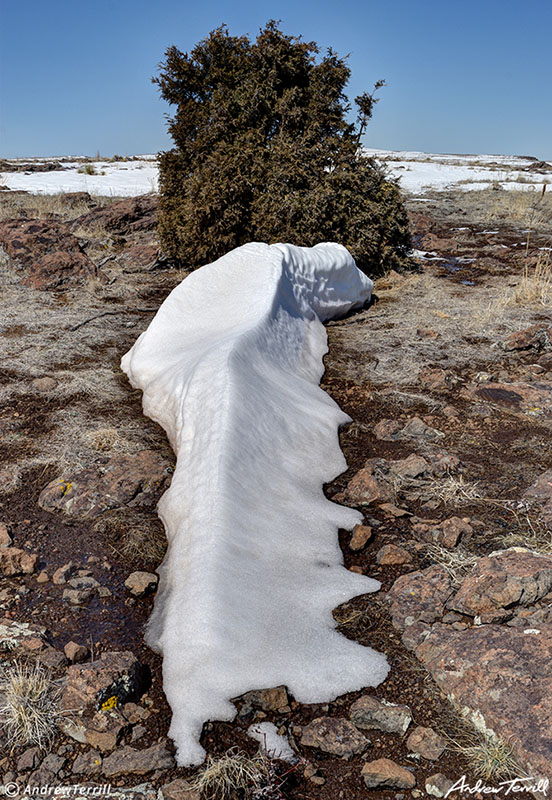 It was clear which direction the wind had been blowing! 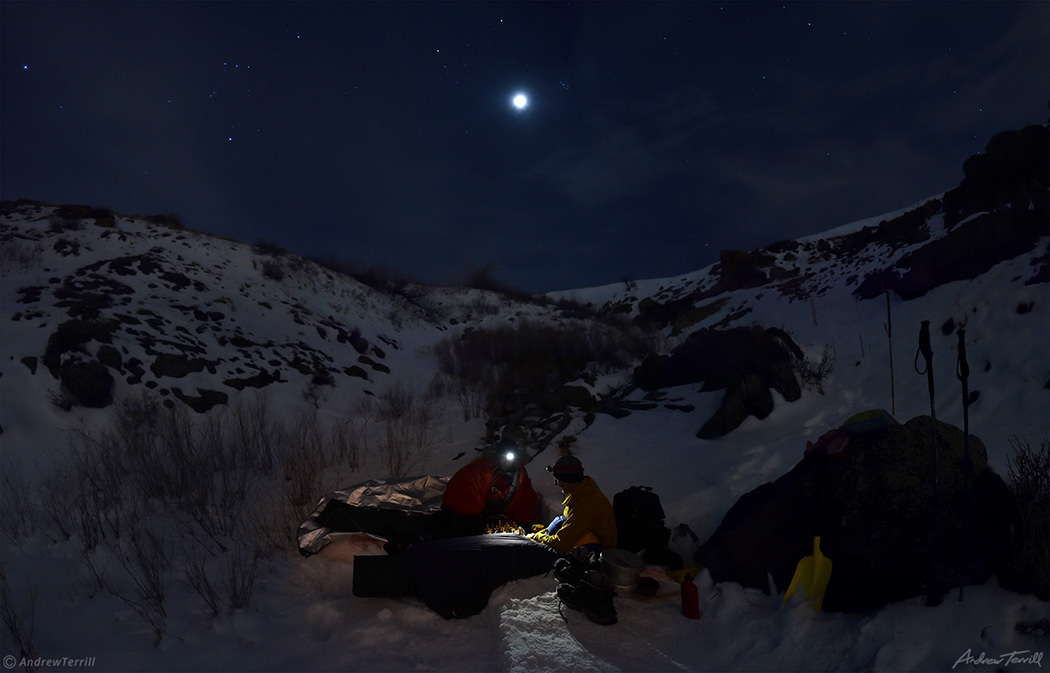 Higher up, there was still enough snow to make another night out feel like a winter outing. This bivvy was shared with a good friend, and it became the funnest night out of the year so far. Chess by moonlight! What could be better? And lying quietly afterwards, staring up at the stars and moon, and around at the snow, I felt nothing but gratitude for the storm that had passed. As inconvenient as such weather is, it still feels important to me to celebrate it!