IT WAS A fairly typical spring week along Colorado’s Front Range: snow one day, warmth the next; clear one moment, cloudy the next. As winter ebbed into spring and then slipped back into winter each day brought something new. For a wanderer on foot, it was just about perfect.

Despite a busy week I made certain I stepped onto open ground every day, and each outing added to the one before, making the short journeys feel connected, as though they were part of something longer, something bigger. It was curious, how a simple hour or two in nature undid the busyness of all the hours not in nature. Every step felt like a reset.

The outdoor highlight came at the week’s end with an overnight trip to Golden Gate Canyon State Park – a short distance west of Golden up in the foothills. Golden Gate is bewitching area, a wonderfully intricate landscape of small craggy peaks, twisting valleys, aspen and pine woods, and open meadows. Small in area, relatively low in altitude, the park can still feel satisfyingly wild, especially in winter when buried beneath snow. Golden Gate doesn’t offer the high drama of the high Rockies, but it still has character. For me, it’s become a special place.

I arrived mid afternoon, and was surprised by the volume of snow. Up here, winter was still holding sway. More than that, as I began walking, winter was soon falling hard. 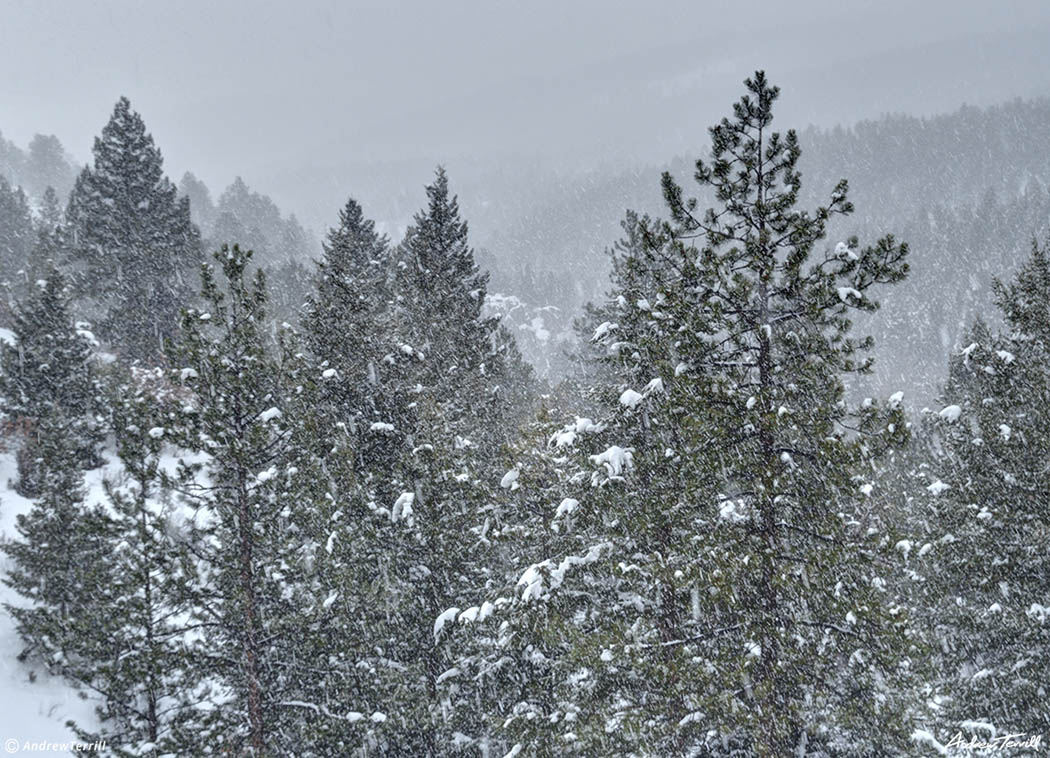 Fortune was on my side, however. I hadn’t brought snow shoes – not expecting a deep snowpack – but a good trail had been stamped by previous visitors. As the snow shower passed I tramped up the trail, impressed by how quiet the hills were, by how different they were from the crowded Front Range communities just ten miles to the east. This wasn’t just a different environment, it was a parallel universe.

It wasn’t a place to rush through. I took my time, letting the soft ambience of winter sink deep. The temperature sat dead on freezing – not cold in the scheme of things, especially compared to other recent outings. The air smelled clean and damp, and slightly sweet. The environment looked far less hospitable than it felt. It felt as welcoming and friendly as home.

The walk into the park wasn’t long, but it delivered change. From big forested foothills I crossed a ridge and dropped into a sheltered valley, and was impressed by the amount of snow still clinging to the trees. The big storm from two weeks earlier might only just have occurred.

I’d come expecting bare patches of earth, a landscape caught between winter and spring, but was delighted to be so wrong. Assumptions, eh? Three-plus decades of mountain travel and they were still catching me out, still surprising me. It’s one of the (many) things I love about mountains and wild nature. And one of the reasons they still feel new.

As I approached my destination the firmly-packed trail faded and then died, and soon I was making my own way, often sinking knee deep. The increased effort both warmed and slowed me, but it was exactly what I wanted. Golden Gate Canyon isn’t remote. And it’s seldom quiet. Having it entirely to myself, and finding it so deeply buried beneath winter, made it into a different place. It was a treat. I couldn’t believe my good fortune.

Finally, my shelter appeared ahead, nestling in the trees. Aside from backcountry camp spots, the park also rents out four Appalachian-style lean-tos. I’d booked one just the day before, a favorite shelter stayed in several times with both my kids. With the forecast calling for more overnight snow and rising winds it had seemed like the perfect time to return. Sleeping out would be rough, and a tent would feel too shut-in for the experience I wanted, too claustrophobic. I wanted to spend another night connected to the land, and a shelter with one wall missing seemed like an ideal compromise.

Approaching the shelter, a burst of sunlight on distant hills hinted at clearing weather, but dark clouds suggested more snow. It was a toss up… but the clouds soon won.

Not that it mattered to me! With snow cascading down outside I soon settled in to my simple home for the night, beyond glad that I wasn’t trying to bivvy. I felt as though I was still outside, with snow falling just two feet away, but was completely sheltered from it. I snuggled into my sleeping bag, pulled out my book, The Earth Beneath My Feet, and got to work on proofing it. For the rest of the day this was my office, and I couldn’t imagine a better or more appropriate place for an aspiring outdoor writer to work!

Eventually, fading evening light pulled me away from my tale of wild Europe and I re-engaged with wild Colorado. A nearly-full moon ghosted through thinning clouds, and the land rested in stillness and silence – genuine silence, so empty it throbbed. The view didn’t have the magnificence of high peaks, or the drama of strong lighting. It was gentler, more unassuming. And more powerful because of it.

Later, I dined in absolute luxury, cherishing my situation. The accommodation met all my needs. It felt five star.

Truly, it was an exclusive place to stay. A rustic room with miles of snow-smothered quietness all around!

A little later, once night had fully descended, I put aside my book once again and went for a long wander into the moonlit woods. The words ‘perfection’ and ‘magical’ can be overused, but in this instance both truly fit. There isn’t a single part of the unmeasured age that followed that I’d change. And none of it had been expected.

I stayed out far longer than I’d intended; and stayed up far later than I’d planned. But sleep would have been daft, with such a place on offer. But eventually I returned to my little lean-to in the woods. And it wasn’t too shabby-of-a-place to return to!

Soon I was settled back in, and I slept well, with the snow-smothered forest right outside. The wind rose during the night, and I woke several times to see clouds of spindrift billowing by, shimmering silver in the moonlight. But where I lay, the air remained still.

A comfortable night followed, until dawn finally lit the horizon.

The coming day, gleaming on icicles.

The shelter’s orientation didn’t quite catch first light, but daylight hit soon enough, bursting over a ridge and flooding my chosen corner of the lean-to with brightness and an illusion of warmth.

Or perhaps the warmth wasn’t an illusion, just as the wildness of the park wasn’t an illusion either. It was what it was, and what it was was perfection, again: a level of magic that occurs so often in nature and so infrequently away from it. As the photo hints: I was somewhat content with the way yet another ‘ordinary’ day had started!

Soon, it was time to hike back out – and it was harder going this time with the previously stamped trail drifted over. But I had no complaints. Every step felt like a treat.

It’s something else to be alive and on foot in a work of art. And even more incredible to know it.

A simple night out, another ordinary day, a few more steps in nature. And every step was a reset.