A Cabin Beside A Creek

I WENT ON a family trip last week: four nights and five days in a cabin beside a creek.

The location wasn’t anywhere well known or especially scenic. It was merely a rustic little cabin perched beside a modest little brook, a tumbling watercourse similar to many thousands right across Colorado. At first glance it looked like ‘just another mountain stream splashing across a few ordinary gray rocks‘. Nothing special. And technically, that was all it was.

The cabin, found on airbnb, was shabby and far from clean. (Don’t look under the cushions, or into the far corners of the fridge!) But it had real personality, and it offered everything my family and I needed. Best of all was its location down a dirt road in an easily overlooked side canyon. The drainage was quiet, natural, and most definitely hadn’t been tidied up for mass tourist consumption. The cabin nestled within the valley’s depths, and it was surrounded by tangled thickets of scrub oak and willow, a few pines and junipers, as well as tall cottonwoods with broken limbs. The underbrush beside the cabin and creek was wild and unkempt, littered with downed trees. It was full of texture and interest. Without leaves it was open and revealed, an environment to look into, not look at. Despite the presence of the cabin, and a few other homes carefully hidden from sight, the valley’s ambience was untouched and wild. 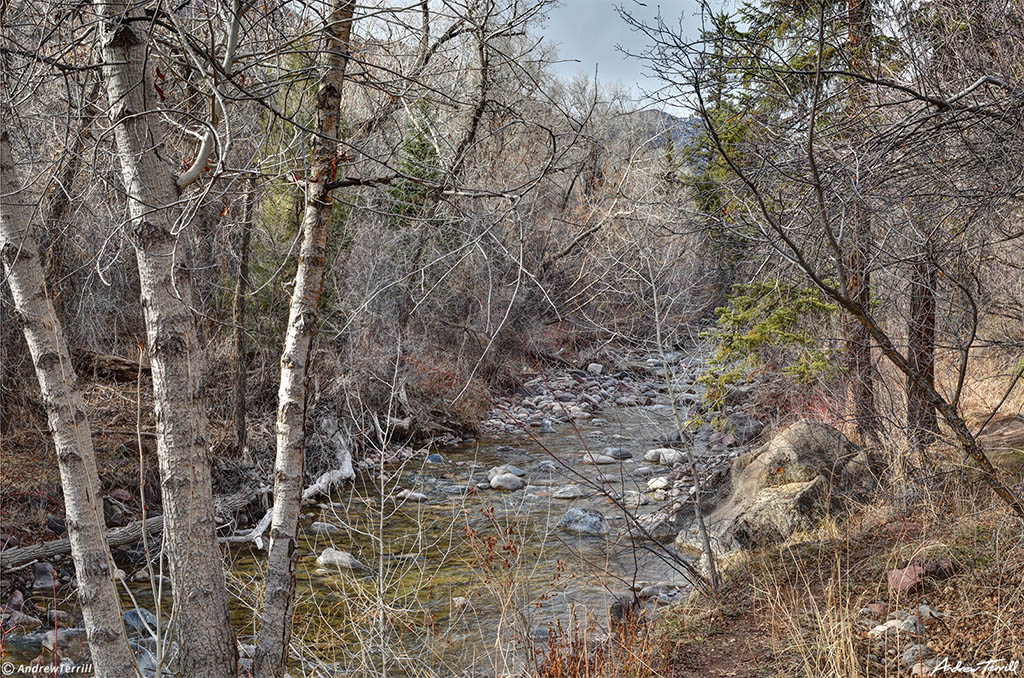 The creek running through the canyon passed directly beside the cabin, and although its flow was low it still made a strong first impression. On arrival, before we even looked at the cabin, we all stared down at the gushing waters. They shimmered like molten silver in the afternoon light, and we were instantly captivated, both by the glittering reflections and also by the creek’s simple and unceasing song. 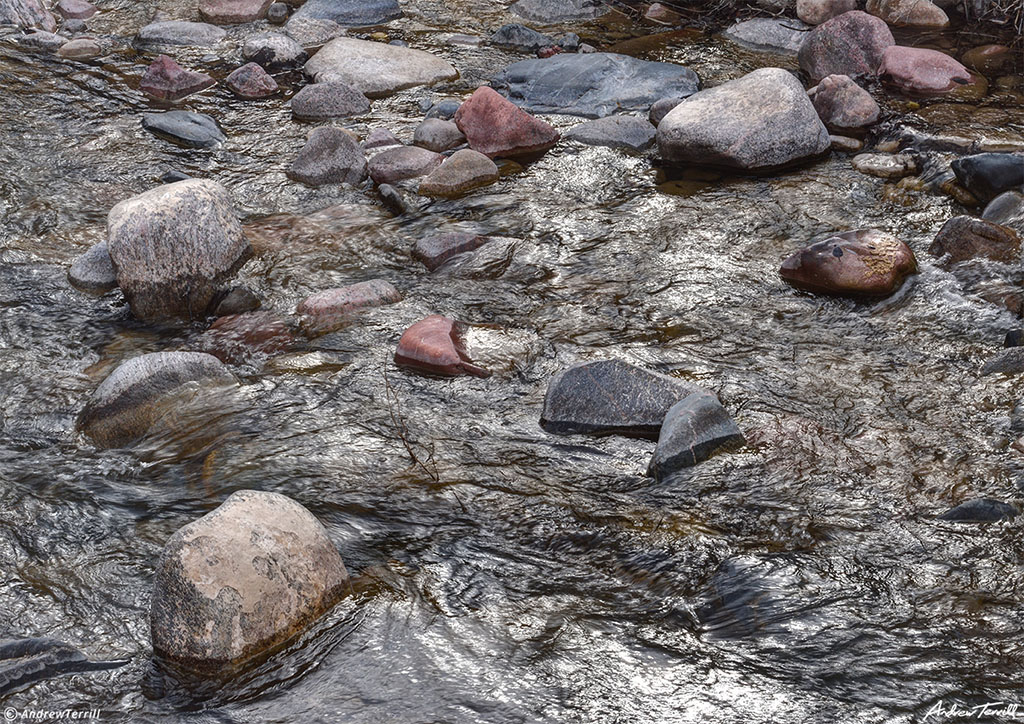 For the next five days the song was the soundtrack to our lives. It accompanied our days and filled our dreams. It made the cabin’s musty smell bearable; made the quirks of its so-called modern conveniences tolerable. The creek sang to us from the moment we woke. It was the first sound we heard each day. It sang while I set the wood stove burning each morning to banish the night-time cold. It sang while we drank coffee, while we played games, while we ate lunch, while we read, while we sat outside, while we cooked dinner on long sticks over the outside fire, while we snuggled down in the evening as a family enjoying a simpler than normal existence. It sang after lights out. It was the last sound we heard each day. The first and the last.

On the surface, there was nothing special about the song, just as on the surface there was nothing special about the creek. The song was just an average burbling sound made by an average creek. But the cumulative effect went beyond average. Far beyond. Without us being fully aware of it the music sunk deep. We were lulled and soothed by it. The creek’s murmured song was like an audio version of a gentle massage, a massage that went on and on, hour after hour, day after day, a soft and loving touch that kneaded away knots we hadn’t been aware of. It was like listening to a wise old sage whispering over and over: ‘Don’t worry, don’t worry, don’t worry… it’s all okay, okay, okay… everything’s okay’. The creek’s song was an irresistible form of brainwashing. It was cleansing and relaxing and elevating beyond words.

I spent a great deal of time sitting beside the creek, simply staring at it. As I mentioned already, there was nothing special about it. It was just another creek splashing across a few ordinary gray rocks. Except, the longer I looked the less ordinary it became. For one thing, the gray rocks weren’t gray at all. They were pink and blue and amber and gold, and every color in between. They were smooth and shiny, and rough and grainy. They were flecked with minerals, with seams, with histories, with character. There were patterns and swirls and textures and designs. Each one was like an entire planet unto itself, growing ever more fascinating and ever richer the longer it was examined. Ordinary? Gray? How wrong could first impressions be!

The creek wasn’t ordinary either. It wasn’t just another creek but one that was unique, a one-of-a-kind environment of perpetual life, sound and motion. No other creek had rocks arranged exactly this way. Or eddies swirling the way these eddies swirled. No other creek was the same as this one, just as this creek was never the same as itself one moment to the next. It was ever changing, a mirror, altering its appearance with the ebb and flow of clouds and light, with the sun as it wheeled across the sky, with shadows as they swung and danced. The creek was molten metal one moment, blazing with ten thousand bright stars the next, then cascading downwards like liquid gold, then running transparent as though not really there at all. It was enthralling to behold, a visual work of art, but not still like most art works that people create. If the creek’s song was a massage, then its ever-changing appearance and gushing motion was pure hypnotism. I lay on a big rock in the middle of the creek, rested my chin on my hands, stared into the rushing waters, and let them carry me away. Into forgetfulness. Into a happy trance. Into a treasured state where self merges with the infinite.

One could come up with all manner of cheesy metaphors for a creek… for the life lessons it could represent, for the wisdom it could teach. Or one could simply stop thinking and look at it, and let it do its simple, profound work.

The pictures accompanying this post are, perhaps, a good example of how something ordinary on the surface isn’t ordinary when given more attention. On the surface, the photos aren’t anything special, not really. If you give each a quick glance before moving on to the next they’ll do nothing. They’ll be forgettable. But if you view each large, and if you view each slowly, spending time staring into them, trying to imagine the sound, the motion, the numbing cold of the water; if you take time to engage – really deeply engage – then everything changes. They change like the creek changed for me, from ordinary to extraordinary. They change the way life itself changes when one really pays attention to it. From ordinary to extraordinary. To miraculous.

Ultimately, there is no such thing as ‘just another creek’.

It could almost be a mantra. 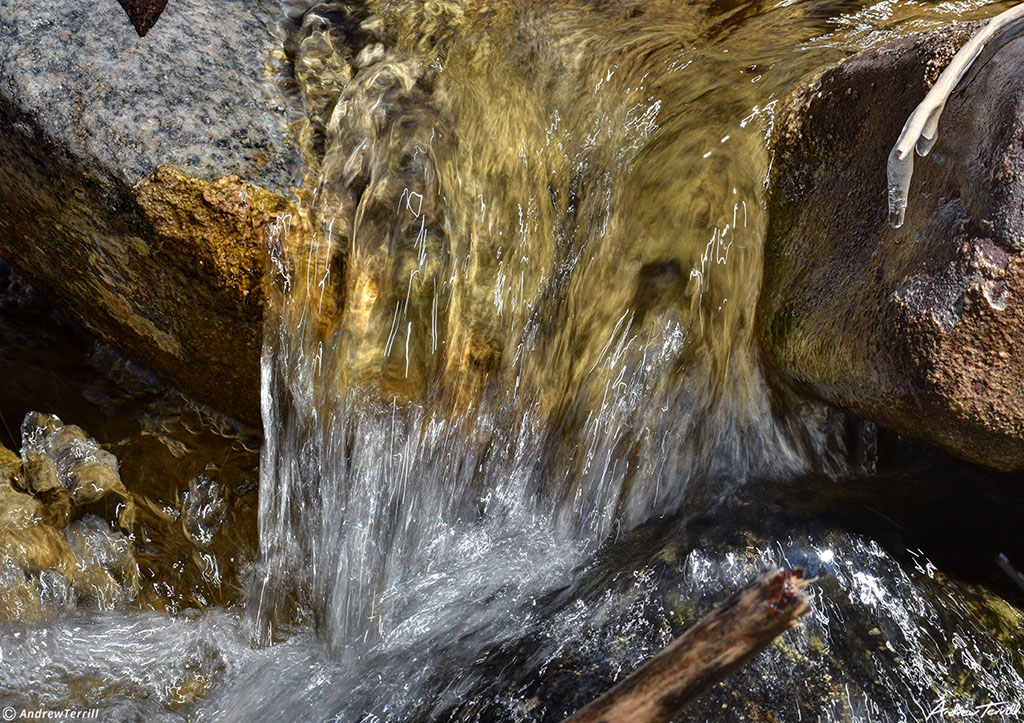 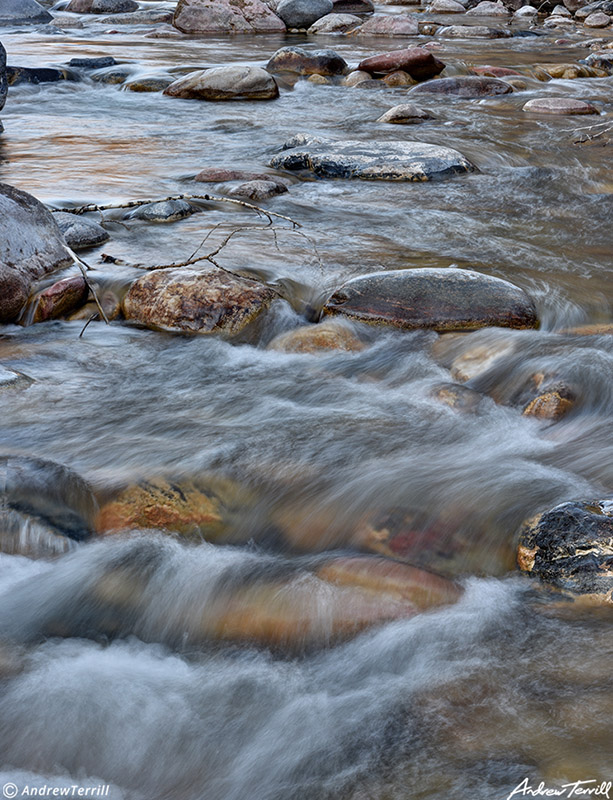 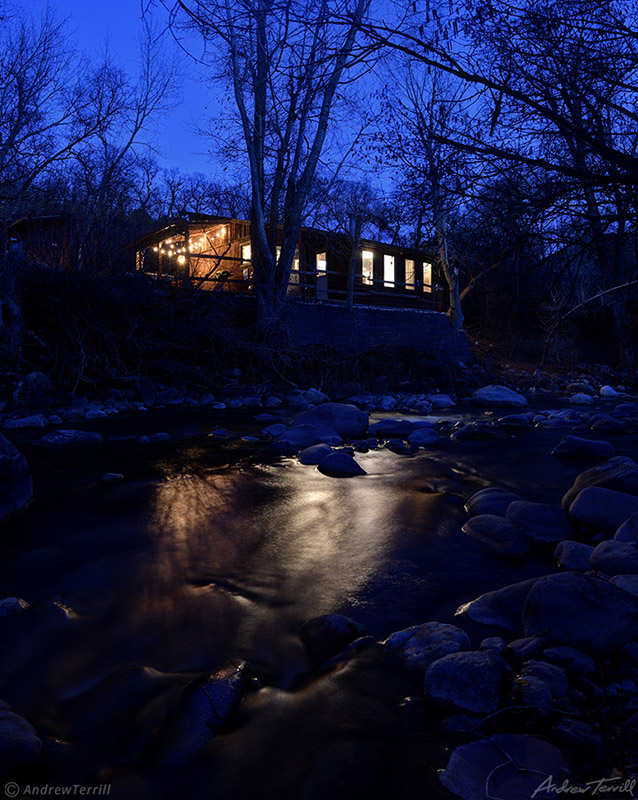