No lunar eclipse. But no complaints! 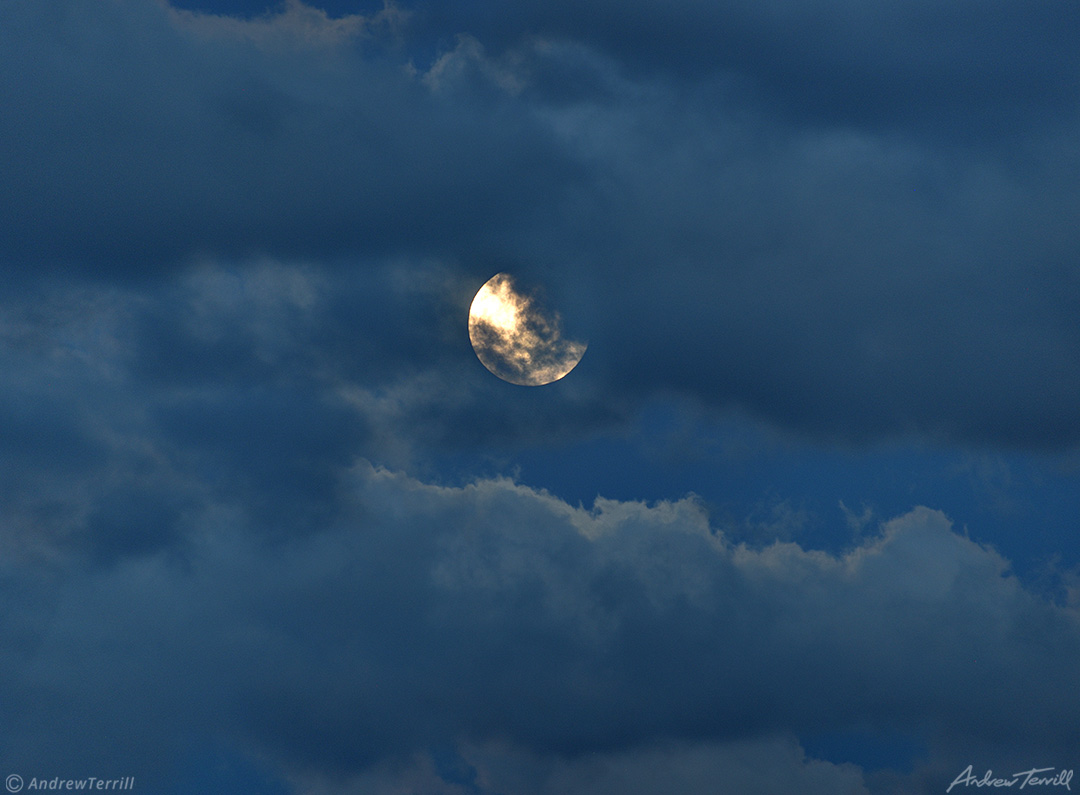 THE FORECAST LAST night was too good to resist: clear skies, little wind, mild temperatures, a full moon, and shortly before sunrise a lunar eclipse… sleeping indoors with all that on offer would contravene everything I believe in! The only argument against heading out for my 20th mountain night of the year was the extravagant name the full moon had been given: the ‘Super Flower Blood Moon’. Seriously? Did I want anyone to think I’d fallen victim to hyperbolic over-labeling?! That would be embarrassing!

But, ultimately… who cares what others think! Hike your own hike. To the hills I turned.

Darkness was falling when I set out into forested mountains thirty-minutes west of home. My destination was a rugged peak capped by shattered blocks of granite, and to reach it a short, steep and impressively rough journey through aspen thickets and pine woods was required. This was the kind of forest that sees few visitors. Trees lie fallen, outcrops block the way, loose ground demands care. In the dark, the difficulties are amplified, but with the rising moon lighting the way, and familiarity with the route from previous visits guiding me, there were no ‘mishaps’ or ‘adventures’. It was all very mellow, all very sedate. I picked my way slowly uphill, and by 9:45pm reached the little hollow on the summit that would be my bed for the night. Ah, home sweet home: a remote, rocky, tree-rimmed nest.

It took a while to settle down. Far to the east, across the plains, a thundercloud flickered with lightning. For a while, I sat and watched, wondering if any of the lightning flashes would spark out from beneath the cloud and register in my camera’s sensor. Alas, the storm wasn’t obliging – just a tiny snatch of lightning in one shot. But no complaints. Photography could never do the storm’s beauty justice. And there was something profoundly serene about watching it from a distance. It was so far away thunder couldn’t even be heard. Neither could the hum of civilization, seen far below where a galaxy of electric lights blazed. Eventually, I lay back and sought sleep, savoring the heady aroma of pine resin, and of earth recently released from snow. I fell asleep with the silver moon shining through surrounding trees.

I’d set my watch alarm for 4:30am, early enough to see the lunar eclipse transition from a slither of moon to a massive blood-red orb. But somehow I slept through the alarm, although still woke naturally in time, shortly after five – nudged awake, perhaps, by the streak of ‘fire’ on the eastern horizon. It was an impressive sunrise to open my eyes to… and it more than made up for the disappointment of thick clouds to the west. The clouds completely obscured the lunar eclipse, spoiling the planned photographs I’d hoped to take of a red moon slipping behind the snow covered peaks of the high Rockies.

But – no matter. No complaints. Look where I was, anyway!

I sat in peaceful acceptance on the rim of my high-altitude nest, and basked in the birth of another day. A rare ‘Super Flower Blood Moon’ eclipse is one thing, but another day to live is something else. I know which I treasure more.

Later, the descent back through the rough forest seemed effortless. And all the birds sang. Possibly, they knew how I felt.