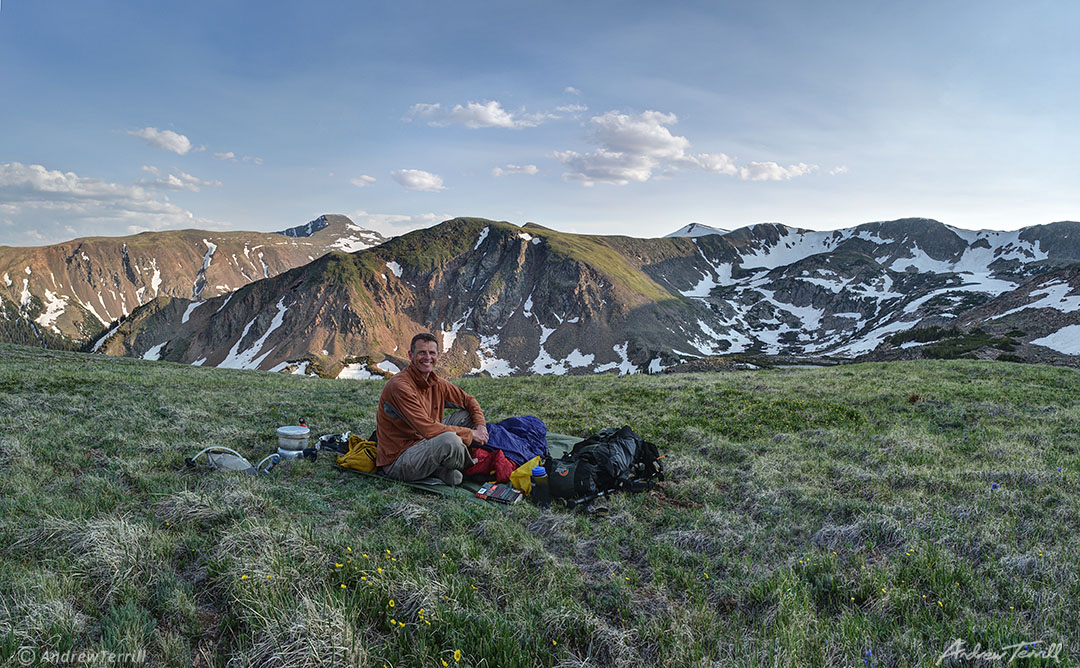 THE PHOTOS LIE – especially mine. Or so I have suddenly realized as I look back at the photos of my most recent walk (a two-night tour through Colorado’s James Peak Wilderness). I mean, the images do show some truth. They show places that really exist and conditions as they really were. But they also lie. They only show the tiniest part of the tiniest fraction of what the walk was.

The lie because they are so woefully limited.

For example: I have no photos that show the joy I felt as I took my first steps into the woods. I have no photos that capture the feel of rough earth underfoot – of rock, soil, mud, rushing water, soft snow, ice, slick tree root, loose stones and grit. I have no images that reveal the feelings that arose when the scent of pine overwhelmed me, a scent so thick it was as though the air itself had become more solid than normal. I have no images of the sounds of the mountains: the song of meltwater and the conversations of birds. I have no images that represent the soaring release from knowing I had two days of freedom stretching ahead. Nor any images of the ‘reality’ of that freedom: the sweat that began forming, the shortness of breath that came from uphill labor, the growing weariness in limbs as gravity began tugging at my oh-so-easy dreams.

I have no photos of the many discomforts from the next 48 hours: sinking to my knees in soft June snow; feet soon soaked as I splashed through sodden meadows; tee-shirt clinging-wet from sweat on a desperately difficult uphill scramble through a wilderness of talus, crag and krummholz to reach my desired destination, a hidden tarn in a snow-draped cirque. I have no photos of the excruciating sting of water still not fully released from winter when I swum in that tarn the next morning. No photos of the enervating toil of climbing to the Great Divide and then traveling along it beneath a fierce midday sun. No photos of the sapping blast of a constant sideways wind that sucked moisture from my pores and commitment from my intentions. None of the spiky, scratching, teetering, balancing, testing route downward into a wild trail-less drainage to escape the wind and find a sheltered spot for camp. None of the painful sunburn on neck and arms; or of the thirst that followed; or the tiredness; or the dull ache in my shoulders from my rucksack. None of the weakness in my right ankle, still unrecovered from an injury that occurred almost six months ago; or the attack of mosquitoes for most of the night when the wind dropped; or when I realized that the season for bivvying tent-less beneath the stars may have passed. I have no photos of the sweaty breathlessness of closing up the sleeping bag to escape the mossies; or the contradiction of feeling tiredness but struggling to find sleep; or the weariness the next morning at sunrise…

I have no images that even ‘mention’ these (and many other) discomforts. I’m a story-teller, supposedly. Not just with words but with images. But I can see that my photo story-telling misses almost everything. It seems laughable, now. Do I really want folk to imagine I had a comfortable time?

Comfortable was the last thing it was!

And I’m not sure my photos hint at the rewards, either. I don’t think I took photos that show what the discomforts do to me, how they change me, how much they inform my entire life, how they bring perspective and appreciation to every second of it.

I don’t think I took photos that really represent what finding connection with nature, with myself and with life really means.

But what do you think? What do they say? Anything?