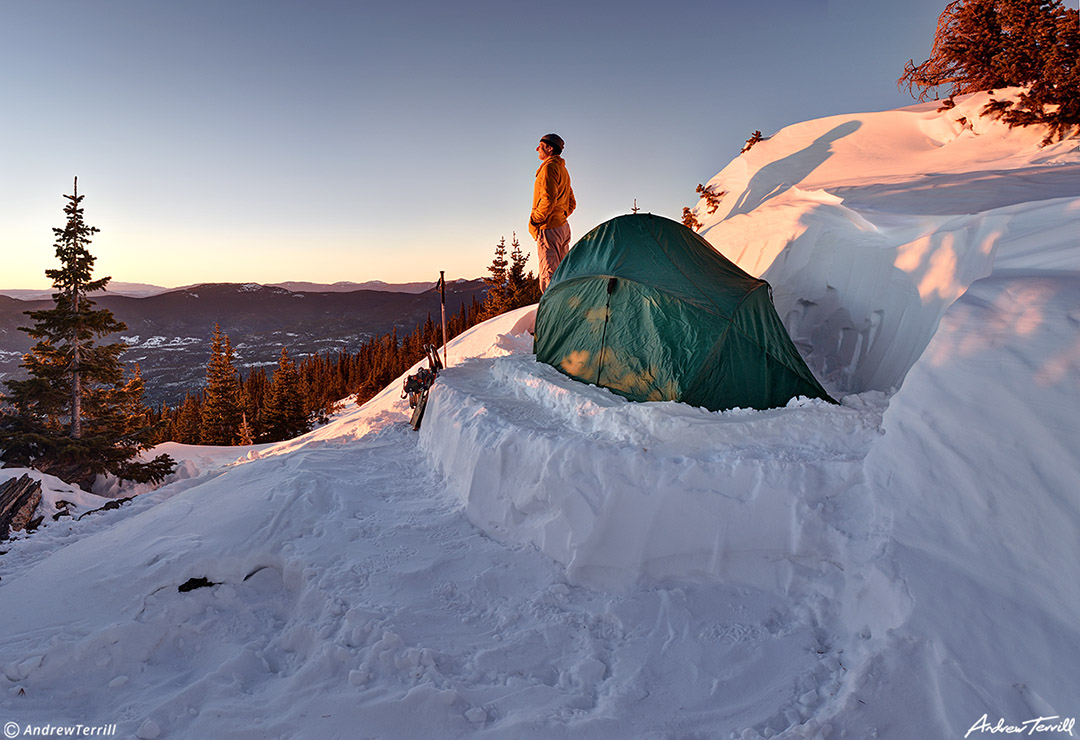 NORMALLY, I’M EXTREMELY organised when it comes to backpacking – especially winter backpacking. But I just demonstrated the opposite – I forgot the bloody matches, again, exactly as I forgot them last June. Ironically, I forgot them upon the same mountain.

I realised my mistake at the trailhead this time, not once I reached camp. I stepped out of the car, pulled on my backpack and thought: ‘Oh! Crap! Matches!’

I’d had the matches in mind while packing. I’d thought about them several times. Grab them once you’ve packed the sleeping bag, I’d told myself, somehow forgetting within moments. Then later: okay, stove and fuel packed. Now – I MUST get the matches. But I’ll just fill my water bottle first. But now there I was at the trailhead, with a snow-covered mountain rising ahead, and a frosty winter night to camp in, suddenly remembering that I’d never gotten round to packing the damn matches.

Bother, I thought. (Or words to that effect.)

I considered driving to the nearest town to fix the problem. But that would mean over an hour lost, as well as pitching camp in the dark. For once, I’d escaped family duties early, and I disliked the idea of wasting the precious daylight hours. Driving, when I could be walking? Ugh! Plus, I wanted to watch sunset from camp. On top of that, the twisting mountain roads were treacherously icy. I’d already driven them once. Did I really want to drive them twice more? To town and back again? 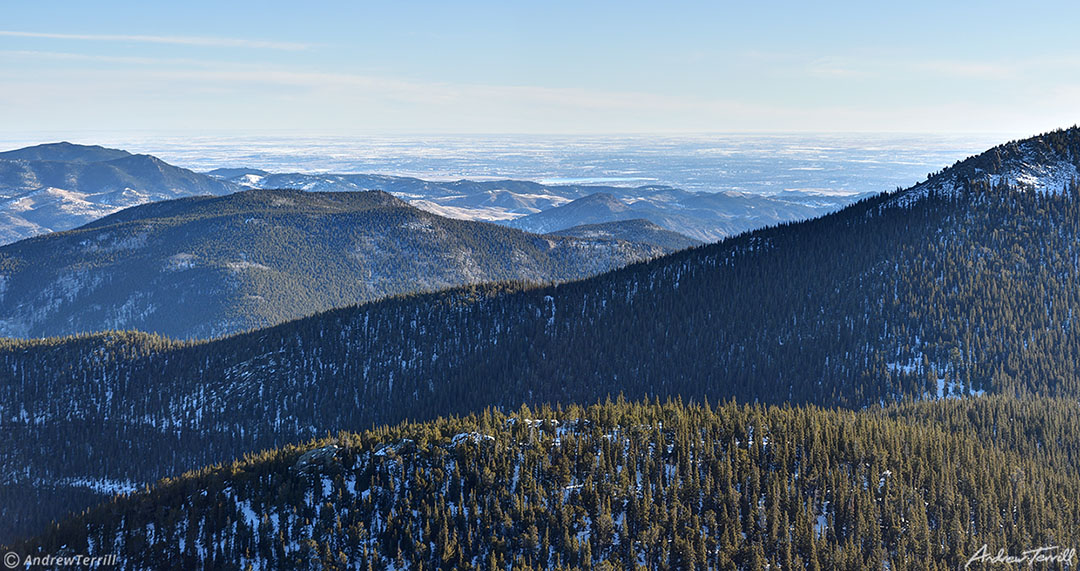 The first time I’d forgotten my matches it had been June. Going without a hot dinner and morning coffee hadn’t been a big deal back then. In summer, the stove hadn’t been needed as a safety net, a way to warm hands after photography or after any unexpected situations. But now, in late January, the idea of a night in the snow without an easy means of generating warmth felt unwise. Then again, I had enough water, so wouldn’t need the stove to thaw snow. I had a few snacks, so wouldn’t go entirely unfed. If I took extra care to keep my hands warm all would be well. Probably.

Making my decision, I discarded the idea of driving. I strapped on my snowshoes, turned for the hills. It would be fine.

Being Saturday, the small roadside trailhead was almost full. The trail up the mountain split after a third of a mile, but odds were high I’d pass other hikers heading down as I walked up. And surely, I suddenly saw, someone would have matches. I’d ask!

Once upon a time, back when Mad Mountain Jack was setting out to walk across Europe, the idea of asking for help, of revealing that I needed it, was the last thing I wanted to do. But I’ve come a long way since then. At the start of my long walk I’d wanted to be an island – self sufficient and competent. But I now know the truth in both of those matters! And I also now know that there is never – ever – anything wrong in seeking help when help is needed.

I met the first hikers before I’d even left the trailhead, a couple just finishing their hike.

‘Erm, excuse me,’ I said as we approached. ‘I don’t suppose you have matches or a lighter that I could tempt you to part with?’ To my ears, my accent suddenly sounded ludicrously polite and British. Hugh Grant in snowshoes. ‘You see, I’m a complete idiot. I’m camping, but I just realised that I left my matches at home.’

The couple looked young, fit and competent. They didn’t shake their heads in judgement at my ineptitude as a backpacker. Instead, they smiled. They instantly agreed to help.

‘Sure, we have a lighter. It’s electric, rechargeable. It’s in the car. You can take it.’

I followed the couple to their car, and we chatted and joked while they rummaged for the lighter. At first, they couldn’t find it. Long minutes passed. They were probably more than ready to get going and drive away, but they didn’t give up, and finally – wonderfully – they unearthed the lighter. It was bright orange, a nifty piece of kit, and certainly not a cheap disposable lighter. (As I later learnt when I looked it up, it sells for $20+.) But they were willing to let me – a complete stranger – walk away with it. 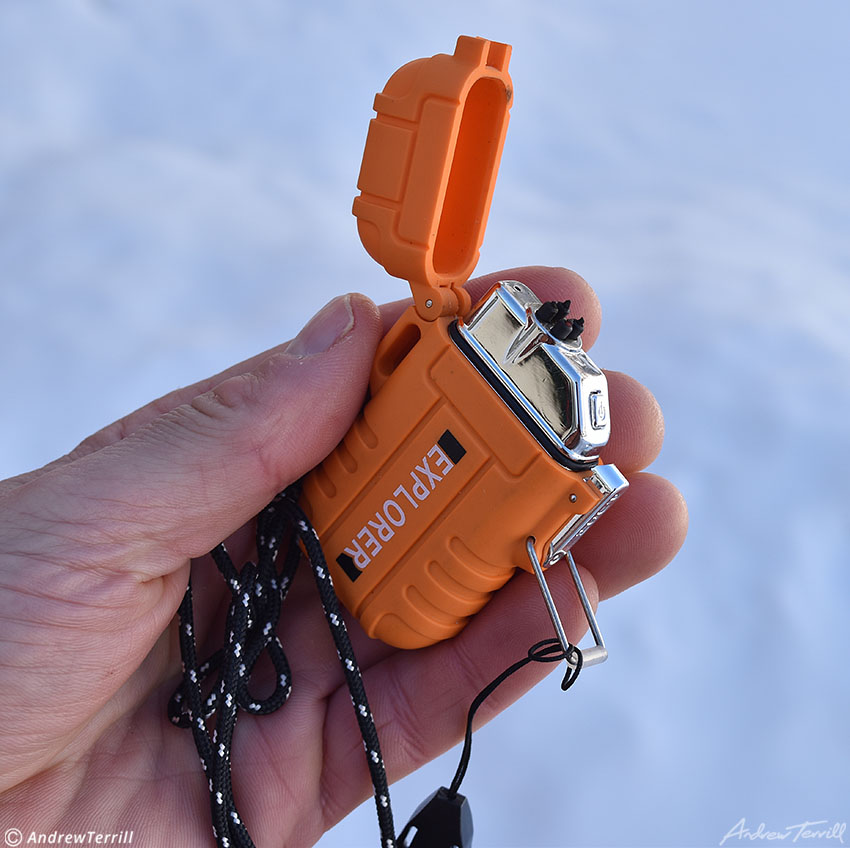 Shaylee, the woman, tested it to make sure it worked. It did. She showed me a flickering blue electric charge where a flame would flourish in a traditional lighter. ‘Seems to be charged,’ she said.

I thanked the couple and took down Shaylee’s number. The least I could do was get in touch and post the lighter back to them once my camp was done. Not that such a thing had been asked for. The couple were simply willing to help.

Finally, I set off up the snow-covered trail in high spirits. Other hikers were coming down, and smiles and jokes were exchanged as we passed. Everyone else appeared to be in high spirits too, a result, perhaps, of time spent outdoors in nature. It’s something I’ve noticed before in the mountains, many times. People change. They become more open. The walls that we often build around ourselves and hide behind back in crowded places fall away. Every single hiker I met smiled at me as though we were already old friends. Perhaps it was merely my own high spirits rubbing off. But it seemed to be more than that. Out here, we were all essentially doing the same thing. We were all humans on foot in nature, out where we were supposed to be. I felt something that I’d felt before in such moments. It was something that seemed clear and obvious and undeniably true. We are all one family. Nature reminds us.

After a while, I paused to remove a layer. I didn’t want to reach camp damp with sweat. I pulled out the lighter and tested it. I saw it spark, a tiny blue electric charge. It was an impressive piece of gear, but I suddenly felt doubt. How would I use the spark to light my stove? My Trangia stove was fueled by a flammable liquid that filled a sunken well. There was no way the electric lighter’s charge would reach into the well. Oops. 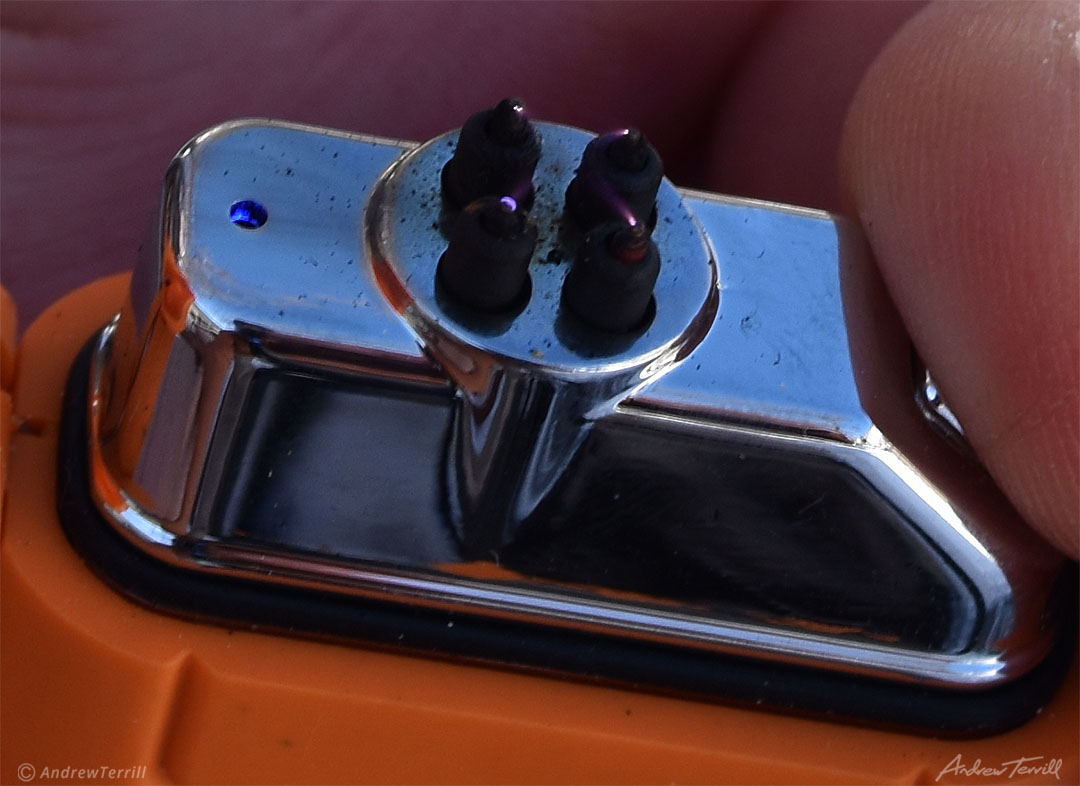 To be safe, I asked the very next hikers I met for matches or a lighter. The hikers were a family – a couple with two young kids – from France, they told me. Yes, they had a lighter – a traditional disposable one – and they handed it over without a second’s hesitation. We laughed, joked, chatted. Once again, they felt like instant friends. Instant family. Numbers were exchanged.

I walked on, my spirits even higher. I continued laughing and joking with everyone I met along the trail. It didn’t matter that I’d forgotten my matches now. What a perfect afternoon! 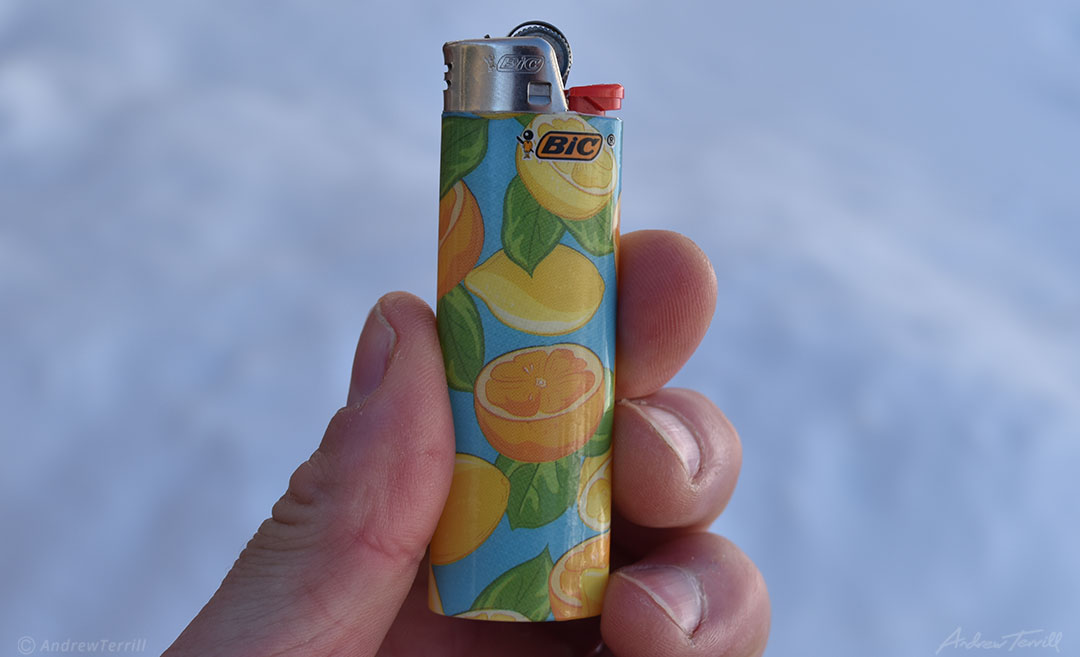 The camp that followed was special. I snowshoed off trail to a remote spot on the shoulder of the mountain. The view from it stretched far: a hundred miles from Longs Peak to the north to Pikes Peak to the south. From the direction it faced, I judged the location would catch dawn sunlight the very second the sun peeped above the eastern horizon. It was sheltered, too. A biting wind was rushing over the mountain, but a massive snowdrift kept off the worse of it. Once I’d dug a platform into the drift and had pitched Auld Leakie the wind barely touched the spot. I could hear it, sweeping over the top of the drift, but only as a soundtrack – the music of the wild. It was a pitch perfect camp. 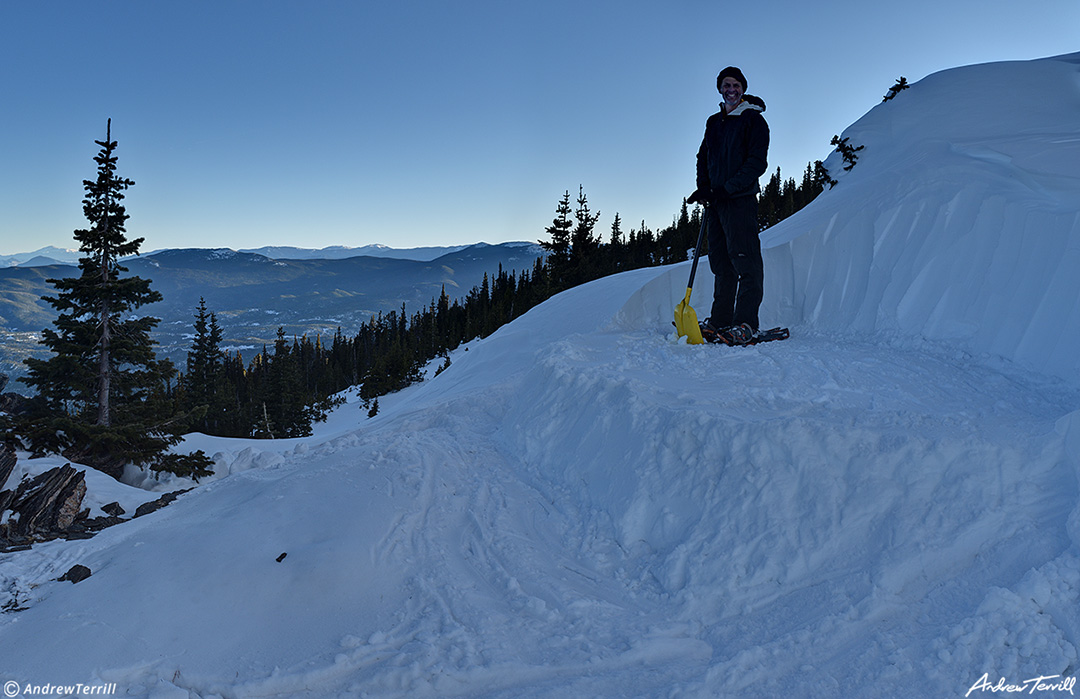 Time passed, and after watching a soothing, peaceful sunset I began preparing dinner. I lit my stove without difficulty using the French family’s lighter, and afterwards feasted in happiness, gaping at the immense view as it glowed with soft blue light. I slept well, despite the night’s fierce cold, and woke naturally in perfect time for sunrise. In fact, everything was perfect – until I attempted to light my stove for breakfast. For some reason, I couldn’t get the lighter to work. What was going on? I soon discovered the truth – the lighter was empty, the fluid entirely gone. Oops. Had I let it drain away? User error?

Fortunately, I still had the electric lighter.

At first, it failed – as I’d feared it would. It sparked miniscule blue lightning bolts, but they couldn’t reach into the stove’s fuel well. Then I had an idea. I rolled up an old receipt from my wallet (I knew I kept all that old paper for a reason), soaked an end of it in stove fuel, and held the paper against the electric lighter. It took a few seconds – a moment of suspense – but eventually the paper caught, a flame appeared, and it was swiftly transferred to the stove. I cheered. I’d have hot coffee after all! All thanks to the incredible generosity of my amazing new friends.

My high spirits were unbreakable after that. Pink morning sunlight soon lit my camp exactly the way I’d hoped, and within minutes the night’s cold had been banished. I lingered for a long while over coffee and breakfast, and when finally began striking camp I didn’t even need to wear gloves, a glorious treat for January at 11,600 feet. 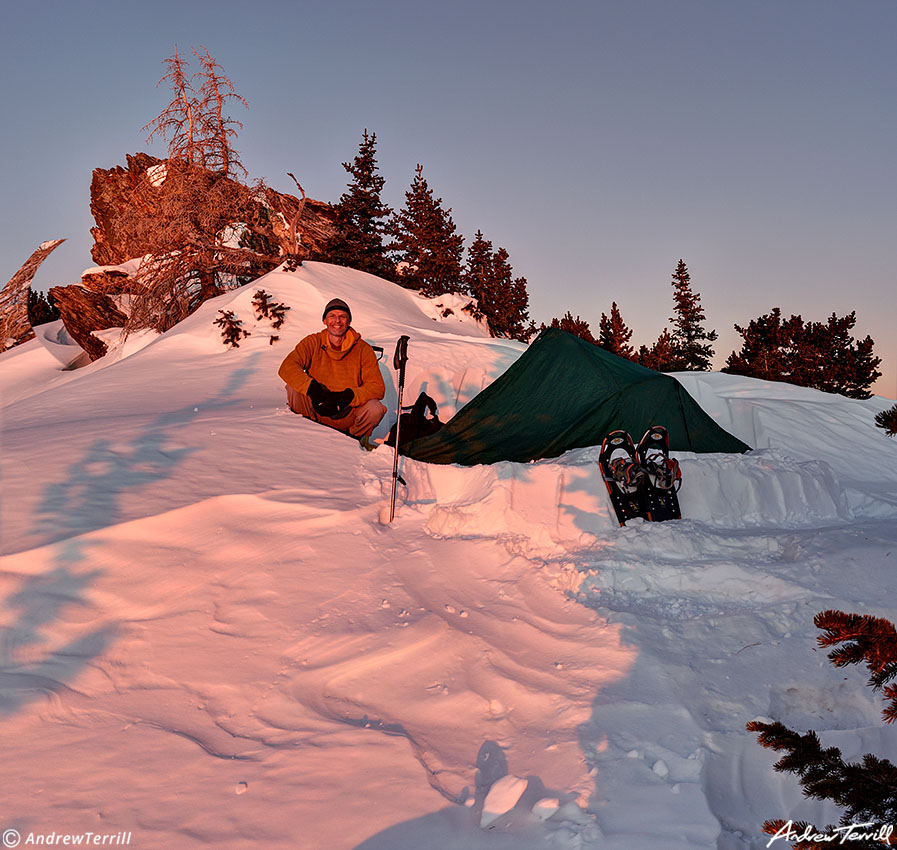 On the way down I met several hikers heading up. We exchanged more smiles, more jokes. Moving on, I found myself thinking about the way social media – and even the mainstream media – often portray other people as negative, unhelpful, mean, unfriendly, argumentative, only out for themselves. But that isn’t how most people really are. I considered it further as I wandered happily down the mountain, smiling at passing ‘strangers’.

I’d just enjoyed an amazing camp, the best so far this year. But the greatest pleasure and takeaway were the people I’d met, and the clear reminder they gave that most people are kind, friendly, helpful and generous.

The truth is, most people are amazing. I had the lighters to prove it!

(PS: the matches for my next trip are already packed.)