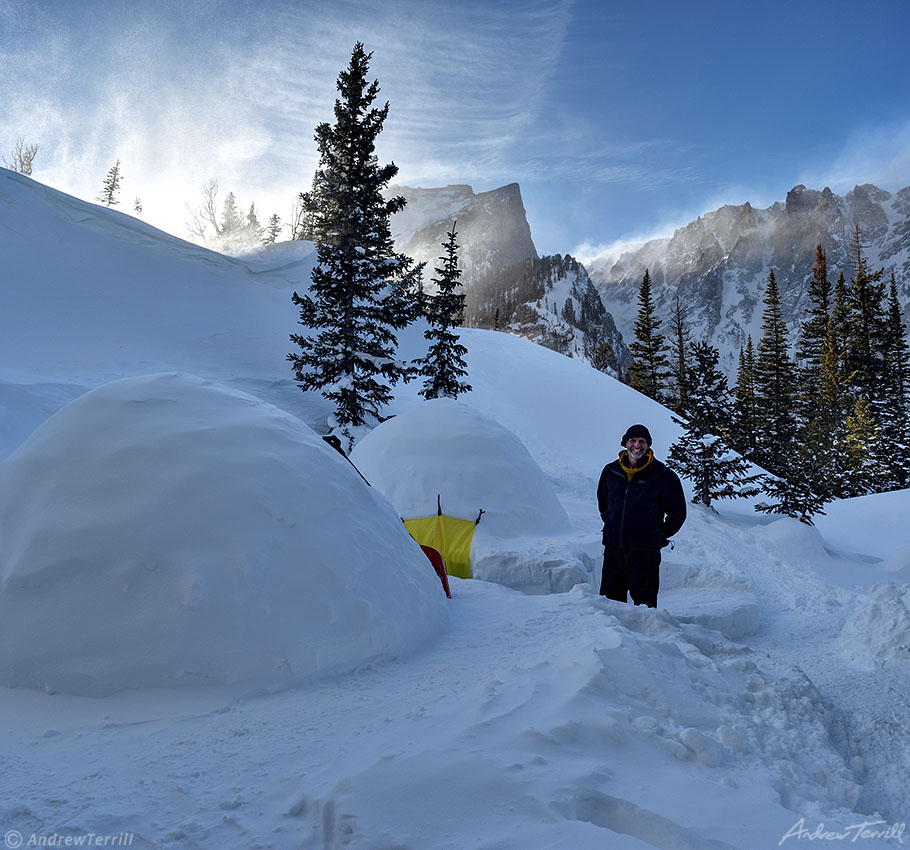 EARLY LAST WEEK a backpacker made a comment on a social media group page that stuck with me.

‘I can’t wait for camping season,’ they wrote. ‘Does anyone think April is too early to start?’

Of course, several people chimed straight in, boastfully claiming that there is only one season for camping – all year. I could almost hear the derision in their replies. How could anyone think otherwise?

But I got it. Even though I camp year round, it’s easy to understand why someone might consider winter an off-season for camping. Clearly, the conditions can be challenging. There’s the finger- and toe-numbing cold, the face-freezing winds, the snow and ice, the long dark nights, the expensive gear, knowing how to use it, the all-round discomfort from sleeping in biting cold, and even the risk of far worse than mere discomfort if a winter camp goes horribly awry…

And then there are the limitations of tents. They don’t insulate. They buck and flap in strong winds. They can sag and collapse under heavy snow. Condensation and frost build within them. Poles and attachment points freeze and become hard to manipulate, especially when striking camp.

And what of the alternatives? Bivvying tent-less? Who’d be crazy enough to do that, especially in a blizzard? Or snow caves? Or quinzees? These snow shelters can be great options, but they take know-how to construct, a fair amount of work, plus very good gloves and waterproofs. Builders of snow caves and quinzees have to accept that they are going to become covered in snow, very possibly wet, and will have to do a hell of a lot of digging and shovelling. Far more work than most people want.

But happily, there is an alternative for winter camping – although not one that might spring readily to most people’s minds.

For the first twenty-eight years of my backpacking life I never imagined that iglooing was a viable option for winter nights out. I tent camped, and I was happy with it. I simply accepted that discomforts were the price that had to be paid and I managed them as best I could, with varying degrees of success. I achieved comfort, at times, but certainly not all the time. Winter camping was rarely an experience that one might call easy.

But then, in 2015, a friend on social media shared a photo of an igloo. A friend of his, Igloo Ed, had built it. The igloo was perched on top of a mountain in the kind of exposed location where one would never pitch a tent. It was – quite simply – spectacular. I stared at it, entranced, and thought: I wouldn’t mind doing that.

Fast forward a year, and after numerous exchanges on social media I finally met Igloo Ed for my first igloo build. Under Ed’s patient tutelage an igloo eventually stood upon the snow, not only a solid and dependable shelter but a genuine work of art. It was everything a tent was not. The walls provided extraordinary insulation; the igloo didn’t flap in the wind, sag under falling snow, stream with condensation, and it didn’t have poles or straps that one had to wrestle with when dismantling camp. It was spacious, comfortable and warm. One might even call it revolutionary. From then on, tent camping in winter would always feel like a second rate choice

Since that first build, further igloos have followed, all constructed using the ingenious IceBox tool that Igloo Ed and his igloo-building partner, Guy Menge, had invented. They were also all built with a companion – with different friends in turn, and even with one of my brothers from England, someone who helped construct an igloo despite having pretty much zero snow-building experience. Sharing the mountains and building igloos with good companions was no hardship, but there was one drawback to the process: it needed another person. What if I wanted to build an igloo but couldn’t find someone to build it with? What if I wanted to escape on the spur-of-the-moment and build an igloo? What if I simply wanted a solitary igloo-building experience?

Fortunately, solo igloo builds are possible – with care and patience. Also fortunately, Igloo Ed was willing to show me how. And last weekend, he did just that.

We snowshoed into Rocky Mountain National Park early on Friday morning, although not as early as we might have liked. At the trailhead, everyone seemed to know Ed and wanted to stop and talk with him. Getting away wasn’t easy. Friendly park rangers, passing strangers, photographers who knew Ed – they all wanted to discuss our plans. Perhaps it was the pulks that we had with us that most caught everyone’s attention. Bright orange, the sleds were laden with gear and gave the impression that we were heading into the wild for some serious hardcore adventuring – not what we were really doing, a short hike and a gentle igloo weekend.

The pulks were Ed’s suggestion, and I’d agreed to them, fascinated to try them out. The Expedition pulks featured two poles that crossed one another and attached to a harness, and as Ed demonstrated – especially on the hike back out – they can be incredibly maneuverable. I wouldn’t have thought it would be easy to guide a pulk through tight trees without it becoming ensnared, or pull it across a steep slope without it sliding sideways, but with a subtle twist of the hips the pulks behaved like well-trained dogs. It was quite something. Totally ingenious. Just like Ed’s IceBox tool.

Once underway, the pulks made for a pleasant change. I was used to heavy winter gear weighing on my shoulders – walking with most of it supported by the ground was far, far easier.

Shortly after noon we reached our pre-chosen camp – a hollow on a sheltered side of a ridge. I’d twice built igloos in the spot during previous winters, and was thrilled to be back. The location offered a grand view, and more importantly it was buried beneath masses of snow, perfect for our needs. As more snow began falling from the sky we stamped down two igloo platforms, and then, with Ed teaching by example, we began our side-by-side igloo build.

On all my previous two-person igloo builds, one person shovelled snow into the form that made each igloo block, one person carefully held the form and packed down the snow. Holding the form steady had always seemed like the most important job. Move it a fraction and a block could crack and fail – as I’d discovered for myself several times. So how the hell can I hold the form AND shovel AND pack snow? I wondered. It seemed impossible.

But it turned out to be surprisingly easy, as Ed showed. Instead of adding single shovelfuls of snow into the form and letting the packer compress it, a solo builder fills the form to the top and only then compresses the snow, reaching deep into it to push it down at its base and edges. To my surprise, the compressed snow quickly locked the form rigid. Huh! It was easy! Who’d have thought! So, who needs a partner?

For the next couple of hours we built our two igloos side by side at pretty much the same pace, spiraling upward from the time-consuming ‘layer one’ to the far faster layers two and three. I laughed at an idea: it could be a new winter Olympic sport: ‘synchronised igloo building’! The gold would go to the cleanest build, not the fastest. Of course, Ed would win. All his blocks lined up perfectly, his edges were smooth, everything was solid, neat and tidy. Ed, forever experimenting and learning – even after building 500-plus igloos – discovered he didn’t even need to compress the snow with his hands to create solid igloo blocks. He threw shovelfuls into the form with just enough force to compress them. It was an impressive gold-medal performance.

Time passed. Eventually, we reached the upper levels, and they were harder. Due to the steeper angle of the igloo blocks, the outer side of the form was removed, but with it gone I struggled to keep the form in place. I couldn’t stop it from shifting, or snow from cascading into the igloo. Ed demonstrated that it could be done – and with relative ease – but ultimately I needed help. The fix was simple: I had the adjustable pole incorrectly set. It merely needed to be longer. By this point, darkness had fallen, snow was still coming down hard, my old and not-quite-up-to-the-job mittens were damp on the inside, frozen on the outside, and I was ready to be done building and retreat into  shelter. The previous few days had been lived too hard, with too many trail miles and far too much rock climbing. I hadn’t prepared for the igloo build wisely – I should have begun the day fresh. But I’d seen how a solo build worked, and I decided I could practice myself at another time.

‘Ed.’ I finally said. ‘Let’s just get these igloos finished. Let’s work together.’ To my delight, Ed agreed.

The igloos were soon completed, one next to the other. ‘Covid compliant,’ Ed observed, referring to our separate sleeping chambers. It was like a miniature snow village. Complete with a network of hard-packed walkways.

The two nights and days that followed were close to perfect. The storm ended and eventually the sun came out, although a brutal wind made it clear winter was far from done. We lingered in camp, explored a little, lingered further in camp. My aging gear meant that staying outside for extended periods was a challenge, but it was easy to rewarm myself within the igloo. There were several moments of bliss, especially beneath the light of the moon when the snow-laden mountains sparkled with ethereal light and pure magic. Just imagine never experiencing this, I thought.

Perhaps my favourite moment was dinner mid afternoon on Saturday. I carved myself a table and chair in a sunlit spot, sat in real comfort with my gloves off, and feasted upon the view as much as the hot food. I sat in utter contentment, fully lost within the moment. It lasted for minutes, but felt like several wonderful hours. 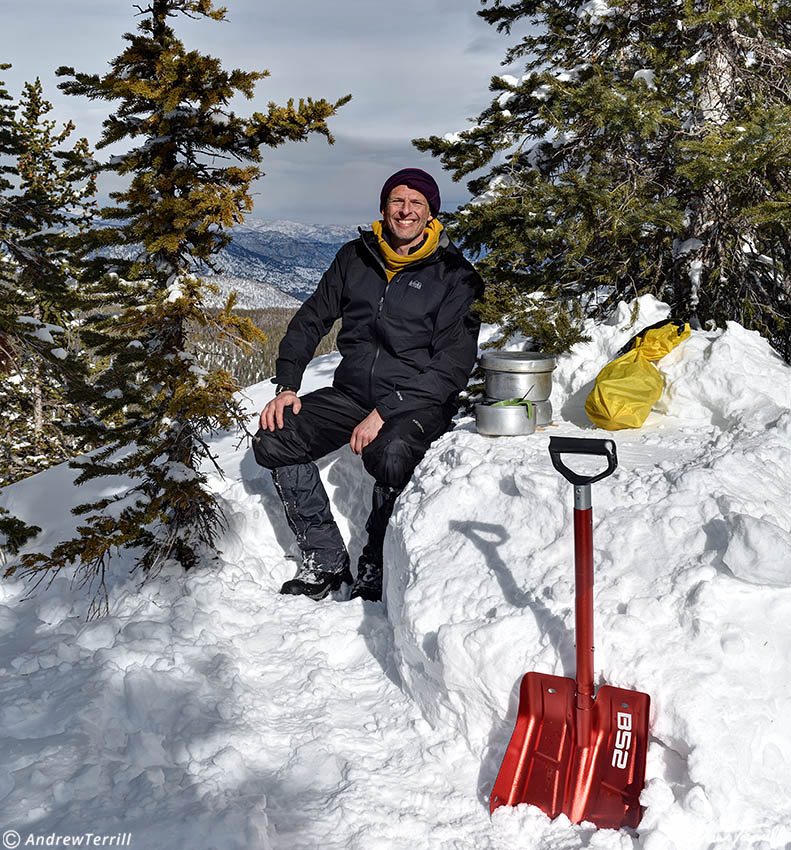 Building and sleeping in an igloo has become a treasured part not only of winter but of life itself. It truly is an out-of-the-ordinary thing to do. It adds to life, enriches it, and because of it I look forward to ‘igloo season’ each year; to the snow being deep enough, to hours spent in a wild landscape building an igloo, to the sheer joy of sleeping within it and then stepping out into another extraordinary day.

‘Camping season’ may well be a year-long season, but igloo season definitely isn’t. And perhaps that makes it all the better. Treasures are worth so much more when you can’t hold onto them for long.

Deep snow, moonlit nights, a wild landscape, and a sturdy ‘home’ that one has built for oneself and can return to week after week…. what could be finer? 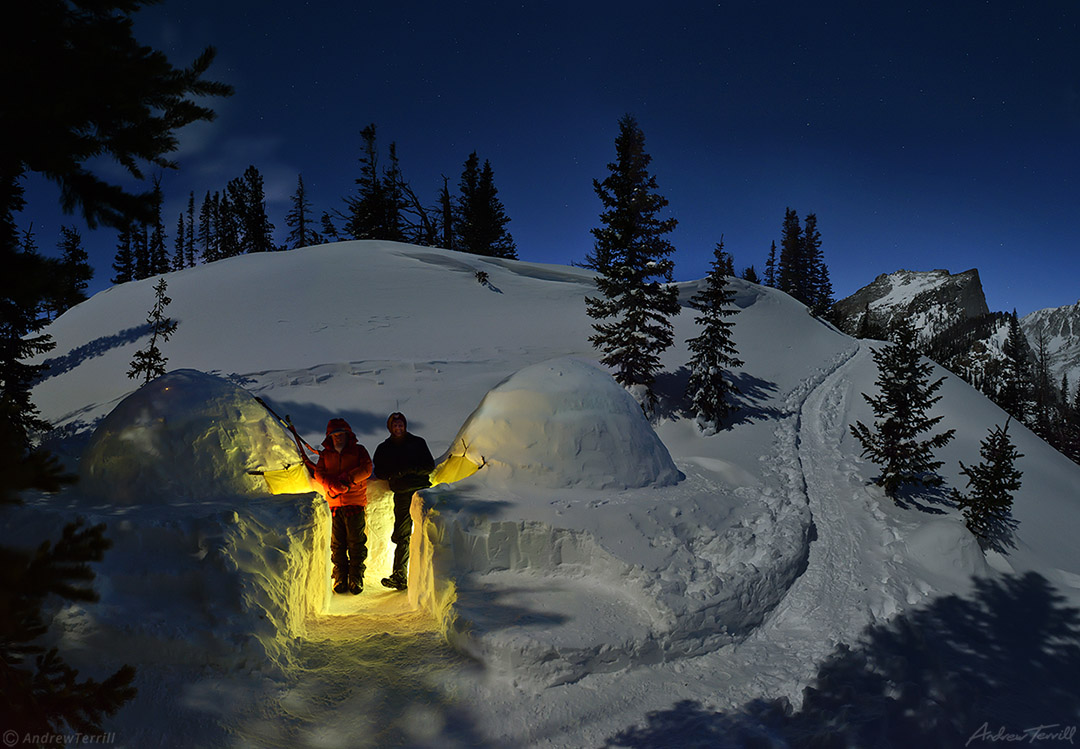 FINAL NOTE: I took many more photos than the few included in this blog. I’ll post the rest of them early next week. It was a thoroughly scenic weekend!