And then the snowdrift tried to eat me! 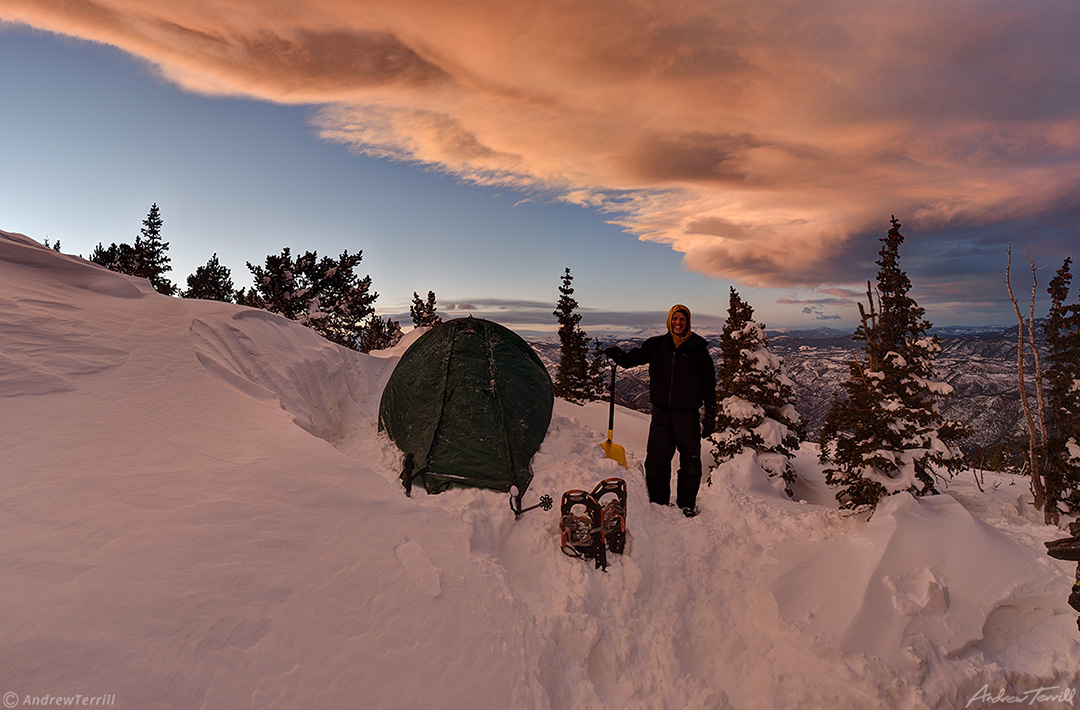 THE EVENING IN CAMP at 11,600 feet was undeniably peaceful, and deeply, deeply soothing.

From the shoulder of the mountain, I watched day transition into night. It was a gentle ‘letting go’ of brightness and urgency, almost like a sigh, or a long-held breath being released, and it was made all the more peaceful by the fierce wind that I could still hear roaring across open slopes a mere thirty feet away. I’d pushed through the wind during my approach to camp, and it had felt unpleasant and numbing. But I was safe from it here. Camp was sheltered – protected by a craggy knoll and an epic snowdrift. I’d camped in the same spot earlier in the winter and it had given shelter then, too. It was why I’d returned.

That previous visit had been so good. I was back for more of the same: for another gentle night in a stunning spot; for another recharging of body, spirit and soul. Last time, I’d slept like a child. I expected I would again. 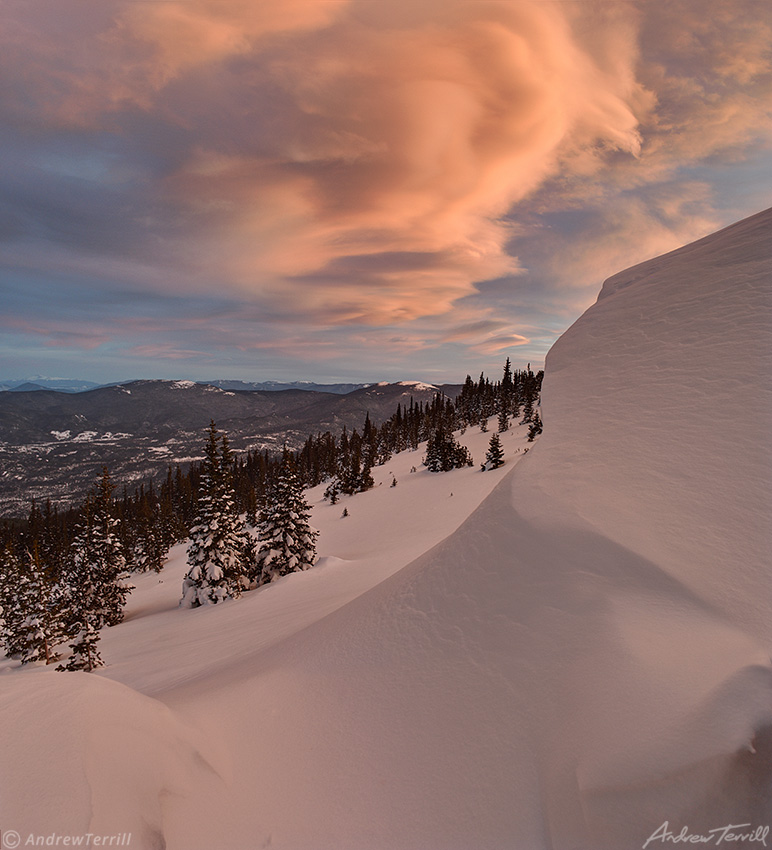 Sunset was colourful, the clouds overhead glowing with warm hues that didn’t match the cold high-altitude air. I lingered outside for a long while, watching brightness fade and a mauve darkness spread, seeing lights flicker on far below across the great plains. Finally, I retreated into my tent, Auld Leakie, chased by a rogue gust of wind. The gust struck suddenly and unexpectedly, carrying with it stinging spindrift. But it quickly passed, and it made me glad I’d settled into such a sheltered spot.

I cooked dinner inside the tent. After wolfing it down I chuckled with childish appreciation for everything I had, feeling calm and content, and also amused at my own silly choices. Fifty-two years old and here I was: still ‘playing’ at camping. I’d done almost exactly this as a child, although in a suburban back garden and with a different tent. I’d pitched camp on the edge of my father’s manicured lawn beside a neatly-trimmed lilac bush, rushing to get my shelter up before an imaginary storm barreled in. I’d curled into my child’s sleeping bag, loving the garden air that smelled so sweet and damp from cut grass, feeling comfortable and safe, chuckling with appreciation. I treasured the memory. Then and now; in so many ways indistinguishable.

(Aside from the snow, of course, and the altitude, and the lack of a solid-walled building twenty steps away!)

At around nine, another rogue gust hit. It shook Auld Leakie as though a giant hand had grabbed it, then peppered it with spindrift. Quietness followed, then another gust, and then another – stronger, more insistent. The tent shuddered, straining against its moorings, making me glad I’d anchored it with heavy snow-blocks ‘just in case’. The wind ceased once more and stillness followed, the seconds stretching out – a final moment of calm before a long, long night began…

The next gust wasn’t fleeting, and it wasn’t even a gust; it was a sudden blast of solid air that swept across the mountain like a torrent – a torrent that wouldn’t stop flowing until sunrise. The wind had switched direction, and strengthened: perhaps to mock me for trusting the arrogant human forecast that had called for an easing of winds overnight, or perhaps to remind a ‘childish’ middle-aged camper that the high Rockies aren’t suburban back gardens after all.

You came in complacency, roared the wind. You had expectations.

So here’s a reminder: you are NOT in control.

From that point on, the peaceful, soothing experience that I’d come for was impossible to find. Sleep was impossible to find, too. The roar of the wind; the hiss of spindrift; the cracking-flapping motion of Auld Leakie – it was all too crazy and loud for sleep. Doubt kept me awake, too – increasing doubt over my shelter’s ability to cope. Auld Leakie was a sturdy tent, but it was also an old tent – a quarter of a century old. For sure, it had served me well. It has repelled more ferocious storms than I can now remember. The fiercest had hit on the Isle of Skye in Scotland in June 2002: two days of lashing rain like water from high-pressure fire hose, along with hurricane-force winds strong enough to bend Auld Leakie’s poles inward and pin the tent flat against the ground with me inside it. At the time, I’d been astounded that the tent hadn’t torn in two, that the poles hadn’t snapped. But now, over two decades later, I wondered at the damage that might still have occurred, at the cumulative weakening from twenty-five years of storms all taken together, at all the UV light, at all the heavy use. Surely, it must have had an aging effect. Auld Leakie couldn’t last forever. Like me, it would fail one day. It was inevitable.

Lying in the darkness, ears ringing from the onslaught, I pictured Auld Leakie tearing open. I imagined gear spilling into the night, clothes flying away, gloves gone, boots buried. To suddenly find myself undressed and bootless on top of a mountain in deep snow in the madness of a spindrift-filled windstorm in the middle of the night would be, well, far from ideal!

To be safe, I made preparations. I placed my waterproofs under my camping mat where I could easily find them, where they wouldn’t blow away. I brought my boots in from the spacious vestibule and placed them beside my head. I put my headlamp inside a boot – easy to find in an emergency. I redressed in all my layers, put my car key in my pocket. No point being able to make it back to the car if I couldn’t get in, warm up, and drive away. Hope for the best, plan for the worst.

Afterwards, I lay still, awed by the ruckus outside and by the mad, bucking tent. Wild as the winter night now was, I was soon too warm – from wearing so many clothes. It made sleep even harder to find.

After a sleepless hour I felt pressure against my legs. I turned on my headtorch and saw that my home wasn’t as spacious inside as it had been. The walls were leaning inward, and when I pushed against them I felt the heaviness of snow. I sat up and checked the vestibule. It was sagging inward, too, the floor space within it almost gone. I thumped the sides and heard snow slide off – but only a small amount. Falling snow hadn’t been forecast – the night was supposed to be clear. Was it all spindrift? I unzipped the entrance and peered out.

It was spindrift. Overhead, the sky was completely clear – I glimpsed stars and the moon – but I could barely see them through a maelstrom of swirling snow. My headtorch lit the chaos of it as the snow flew by, streaks of white careening in all directions. The beam also lit the snowdrift beside camp. I’d dug a tent platform into the drift, but in the last hour the platform had vanished and the drift had re-grown. It had expanded; it was still expanding. It was swallowing my tent whole.

To my surprise, I laughed aloud at that. Help! A snowdrift is trying to eat me!

I withdrew into shelter, dressed in my waterproofs, pulled on my boots, gloves, grabbed my snow shovel, and clambered outside. Staggering against the wind I got to work, shovelling the newly-drifted snow away from Auld Leakie. The snow was a foot deep already and impressively compacted. When I slide my shovel into it the snow came up in solid slabs and blocks. Careful not to pierce Auld Leakie’s walls with the shovel’s hard metal edge, I cleared the drift away, then retreated inside.

An hour later I was back out again – the tent was once again disappearing beneath the drift.

And so the rest of the night went. The wind raged and surged in cascading waves, spindrift blew, hissed and settled, Auld Leakie shook and sagged, and every hour I returned outside to release my home from the insatiably hungry drift. At the rate the drift was growing – a foot every hour – Auld Leakie would be completely buried by dawn. Buried and crushed. With me inside it. Would I run out of oxygen without ventilation? Would I be able to escape my snowdrift tomb? It seemed better to keep digging and not find out.

Goodness, it was a long night!

Eventually, perhaps an hour before dawn, the wind eased a little and finally I slept. The sun rose unseen and unphotographed, just as I hadn’t photographed moonrise over the plains the way I’d wanted, or captured a ‘glowing tent’ photo as planned, or hadn’t experienced the peaceful, soothing, restorative night that I’d come for. In fact, little about the night had gone as planned, but… that was okay, all things considered. When I opened my eyes I was simply happy that it wasn’t night any longer.

Some dawns really are more welcome than others!

By the time I’d eaten breakfast, savoured my morning coffee, and had packed away camp there was barely any wind. On the way down I passed a few fellow hikers heading up.

I slept like a child that night back at home in a soft bed, beneath a roof not about to collapse on top of me. It was peaceful, soothing, restorative. There was no roaring wind. No hungry snowdrift. No midnight shovelling. No ice-encrusted tent to pack away at dawn.

But the funny thing was, when I awoke in comfort at dawn, a significant part of me wished I was waking in camp.

Ah well. I guess some people will never grow up. 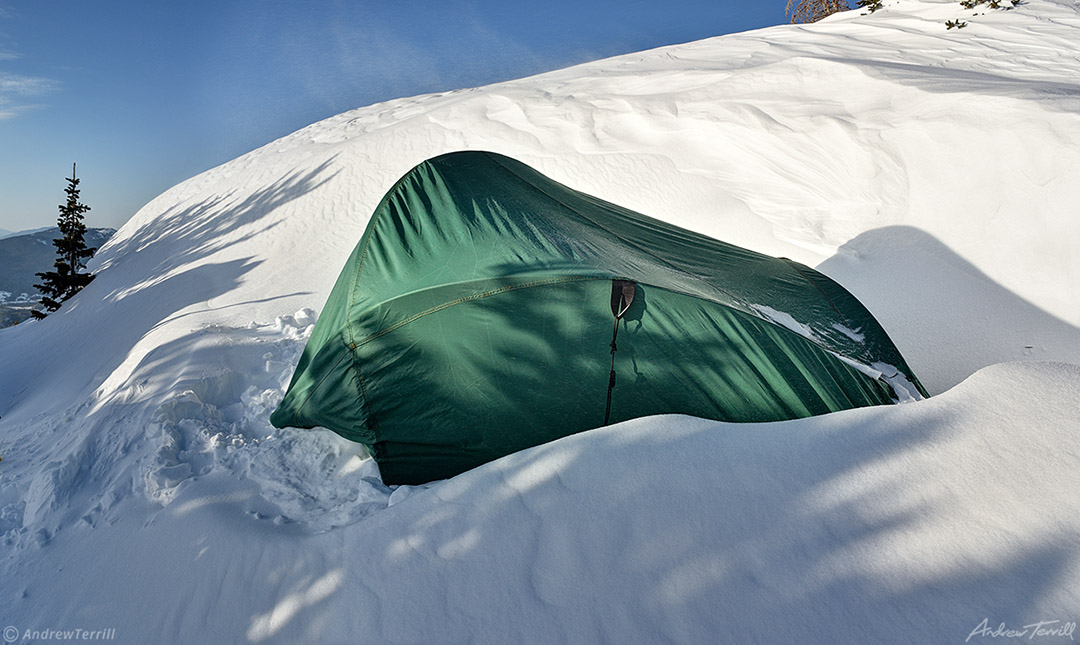