Over the last three weeks I’ve spent plenty of time on foot, several more nights out, and I’ve also been working hard, trying to carve out work time to typeset On Sacred Ground. The trouble is, my graphic design work keeps getting in the way. I need the design work to fund book publishing expenses (such as proofing, editing, and audio book costs), but the design work means I have limited time to work on the book. Do other authors and indie-publishers face these challenges?!

One recent book ‘highlight’ was a presentation I made to a local book club in my home town, Golden. The college in town – The Colorado School of Mines – runs the ‘Town & Gown Book Club’, the aim of which is to bring the Golden and Mines’ communities together to read and discuss a book. For this, they kindly chose The Earth Beneath My Feet, a choice I was honoured and deeply grateful for. The only downside was having to stand before the assembled book club and talk – never an easy task for a stammerer! But I long ago decided that fear wasn’t going to hold me back, so I embraced the event, and set it up as a Q&A session rather than a straightforward talk. To my relief, the event went better than any of my many previous public speaking attempts have gone. I would once have walked thousands of miles to escape the humiliation of public speaking, but to my surprise and shock I actually enjoyed it, and may even have made sense with some of my answers. I’ve come a long way!

As part of the presentation, I put together a slide show to sum up the first half of my walk across Europe. I’ve added the link here in case it is of interest!
The Earth beneath My Feet Slide Show

Anyhow, instead of a carefully crafted blog, here are some photo highlights from the past few weeks. Many of my outings have gone undocumented, but the following photos still capture some of the moments: 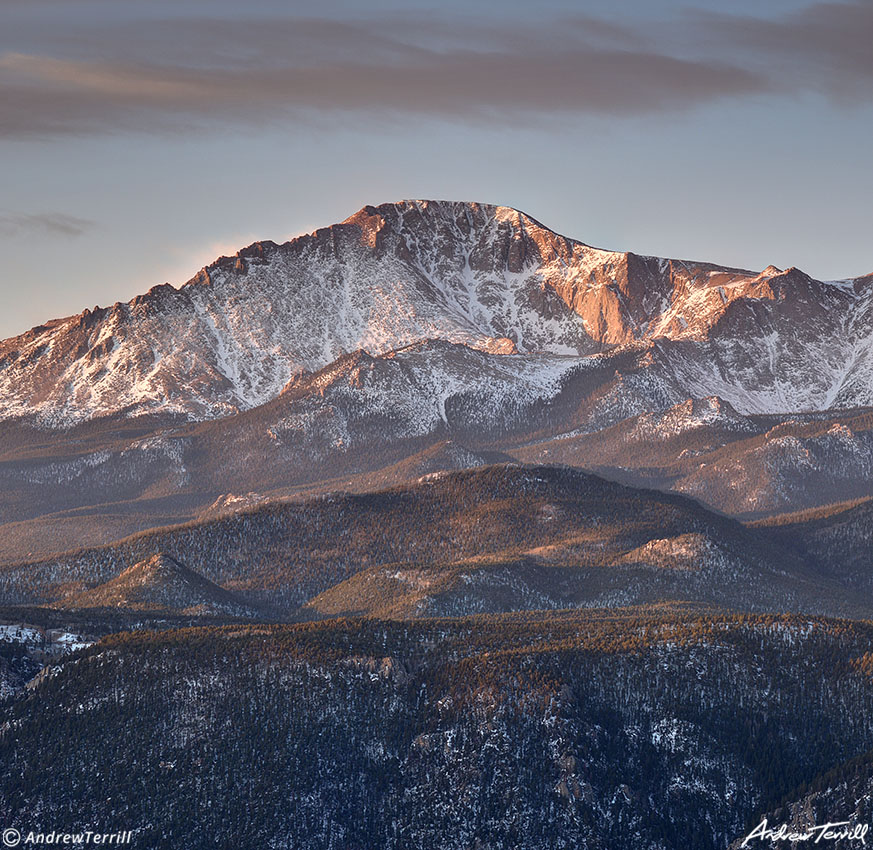 Morning light striking Pikes Peak, March 26. During ‘spring break’, my family and myself stayed in a cabin near Woodland Park, and from it I made several forays into the local woods and hills. The outing that brought the greatest pleasure was a dawn ascent to a grassy hilltop, and despite a cold wind rushing across it I lingered long to watch the new day emerge. As usual, it was time well spent. As a mountain, Pikes Peak doesn’t have the greatest appeal to me. The road and railway up it, the large summit parking area, and gift shop, have all greatly diminished its stature and wildness, but on this morning I saw it anew. The sunlit mountain bowl beneath the summit called powerfully. I imagined camping within it, and pictured the walk I’d be on when doing it: a continuous walk over all of Colorado’s 14,000-peaks. Something to look forward to! 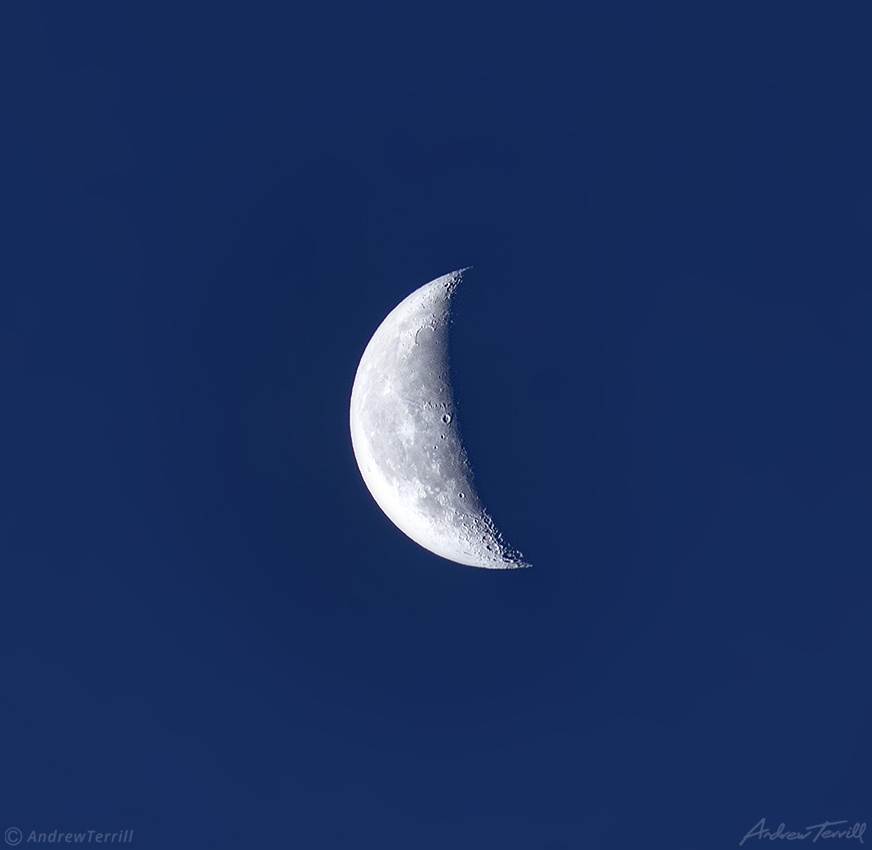 While waiting for sunrise in the cold wind, the waning moon was a fine distraction! 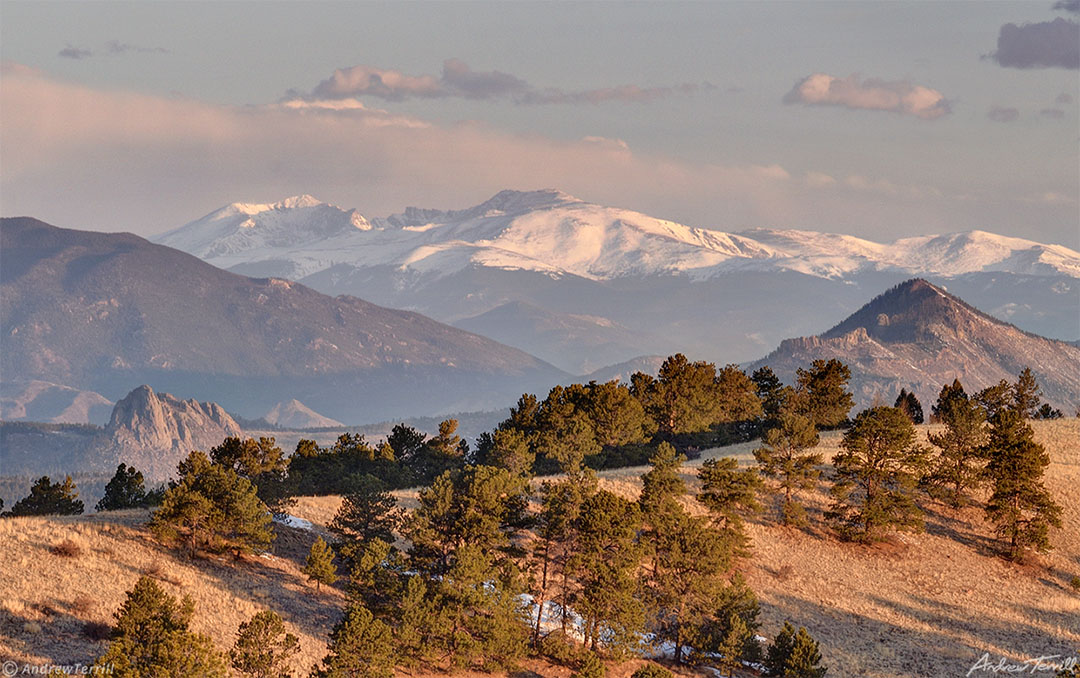 After sunrise, I stared north to an unexpected view of Mount Evans and Mount Bierstadt. I’ve never looked at the peaks from this angle, and it was fascinating to see familiar friends in a new light. 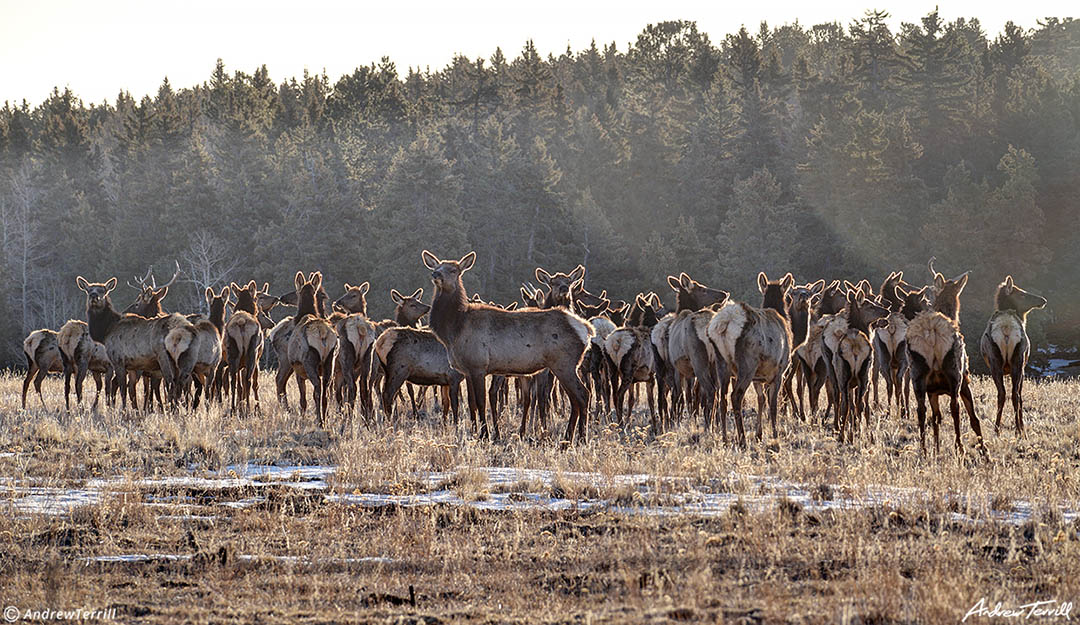 A herd of elk, a short distance away. As daylight grew they retreated into the forest. 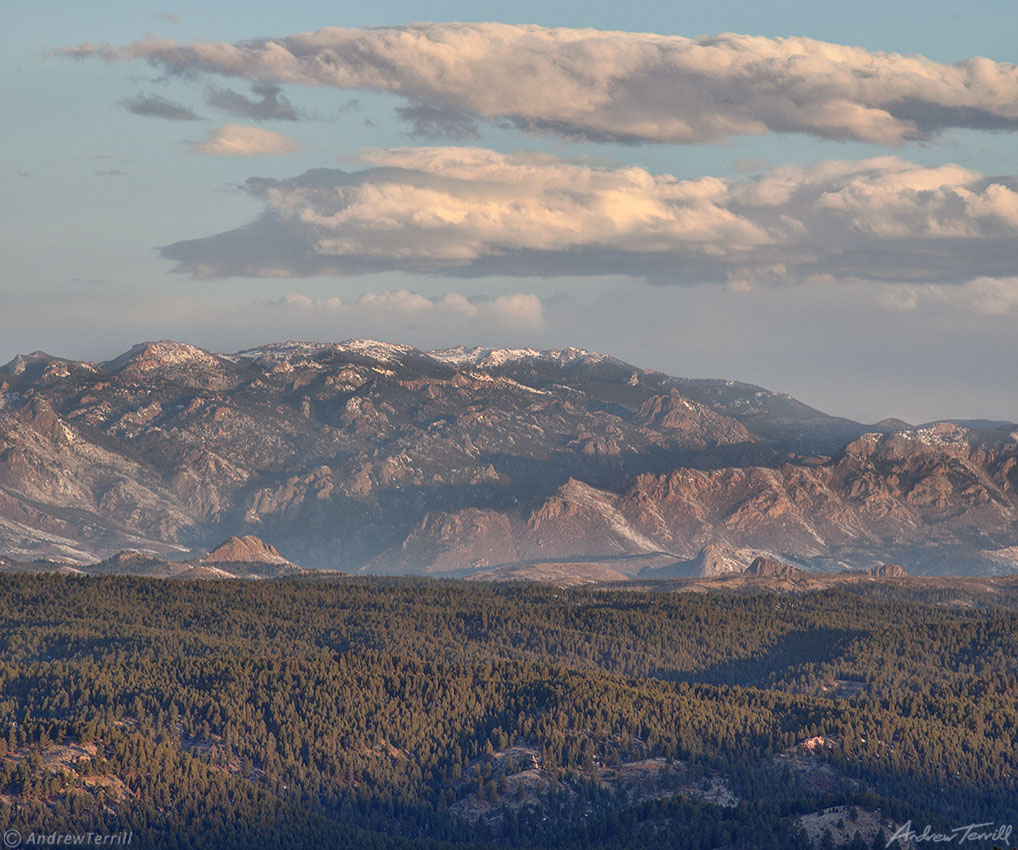 Away to the northwest was the Lost Creek Wilderness, a favourite place, rugged and intricate and full of character. With luck, I’ll manage a two-night loop there soon. 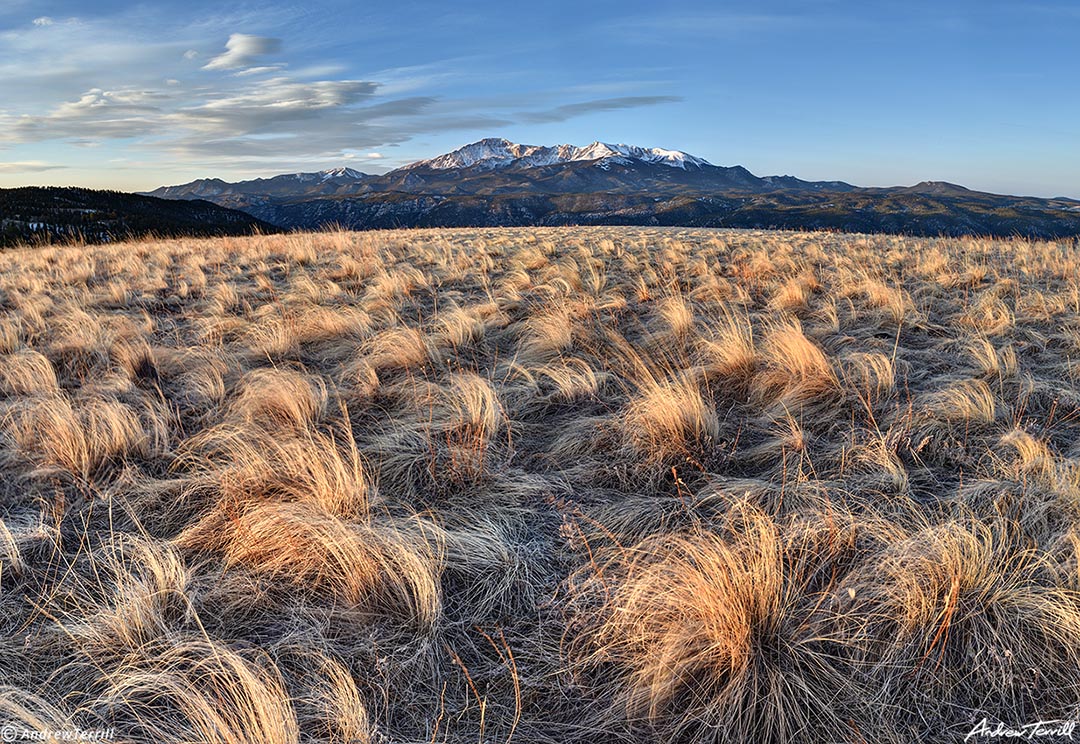 Imagine a strong wind blowing. Imagine clean, sweet air, and the grass dancing in the wind, and birds singing, and a great sense of space, and of being free, released. It was a throw one’s arms wide ‘Sound of Music’ kind of moment! 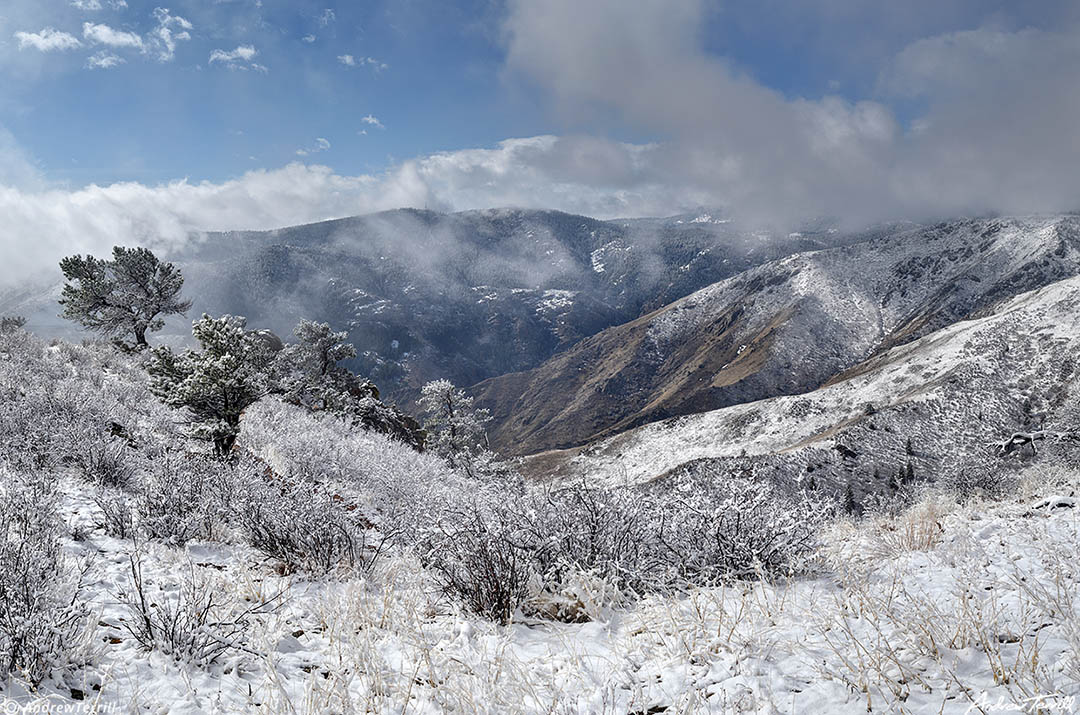 Four days later, and back in Golden, conditions were very different. Rain and snow moved through overnight, and I climbed onto Mount Galbraith early in the morning before the snow thawed. My timing was fortuitous: I set out beneath dark clouds but soon found them breaking, and I was up high when the sun finally burst out. This was the day of my book club presentation, and preparing for it with a couple of hours on foot seemed appropriate. It certainly helped me relax – AND it fill me with joy I just wanted to share! 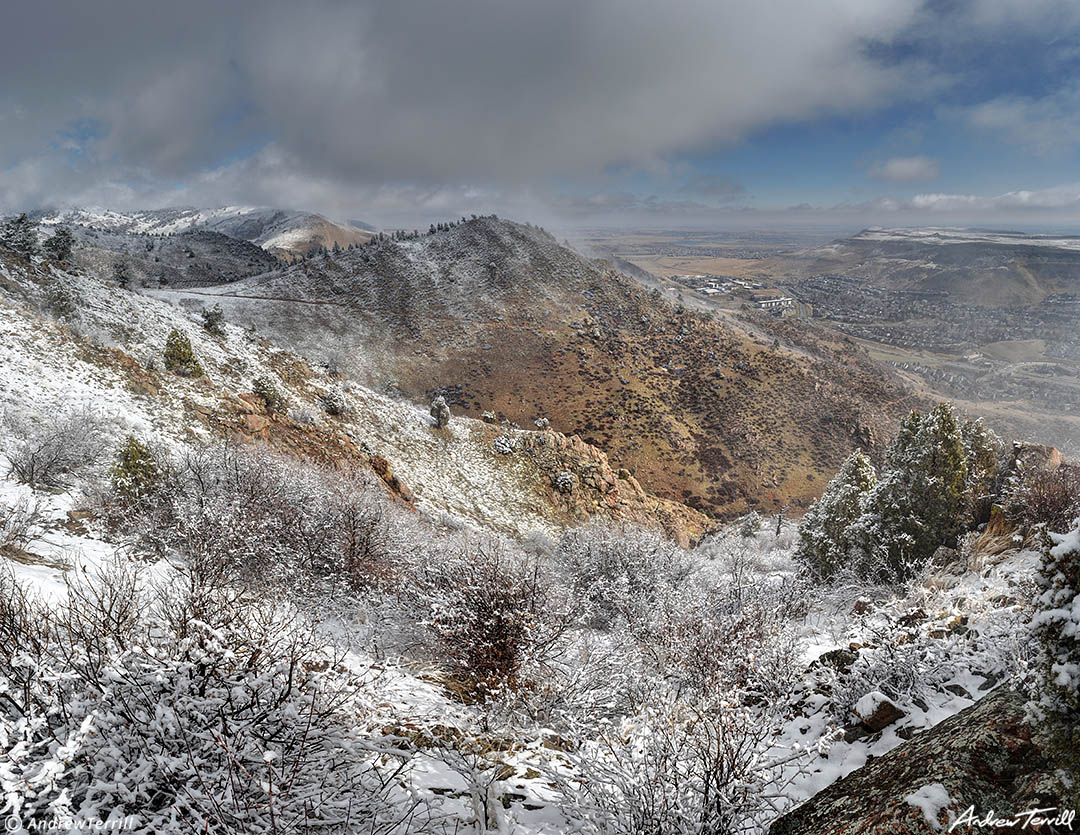 Looking down past the snowline to Golden. Usually, here in Golden, when it snows it settles in the valley AND on the tops. The temperature lapse rate is seldom pronounced enough to form a snowline. So this outing was a treat. To have the summits covered and the valleys clear made the mountains feels bigger and wilder than they really are. 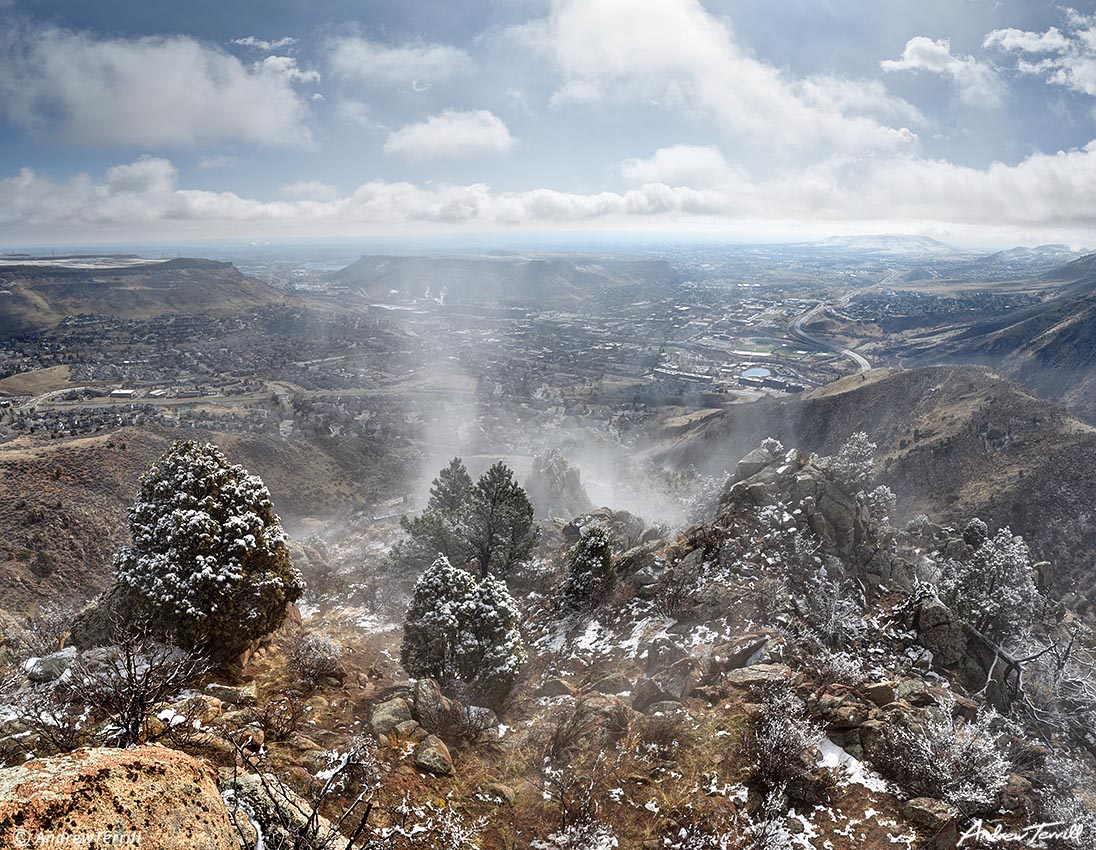 On the way down the sun was already warm and the snow was thawing before my eyes. The damp hillsides were steaming, the night’s moisture passing straight into the dry Colorado air. 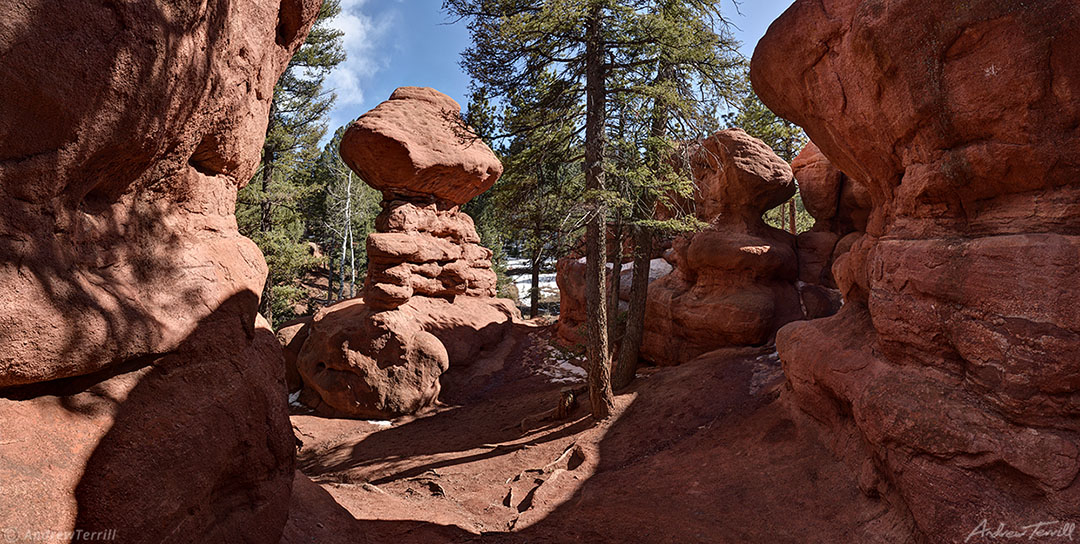 During the cabin trip to Woodland Park, a short family walk took us to this beguiling location, the unimaginatively named ‘red rocks’. (There are so many Red Rocks in Colorado and the American South West.) It was a wonderful environment to explore with my children, a real ‘hand’s on’ location, with so many caves and cracks to investigate. Forget ‘Red Rocks’. How about: ‘The Desert in the Trees’? 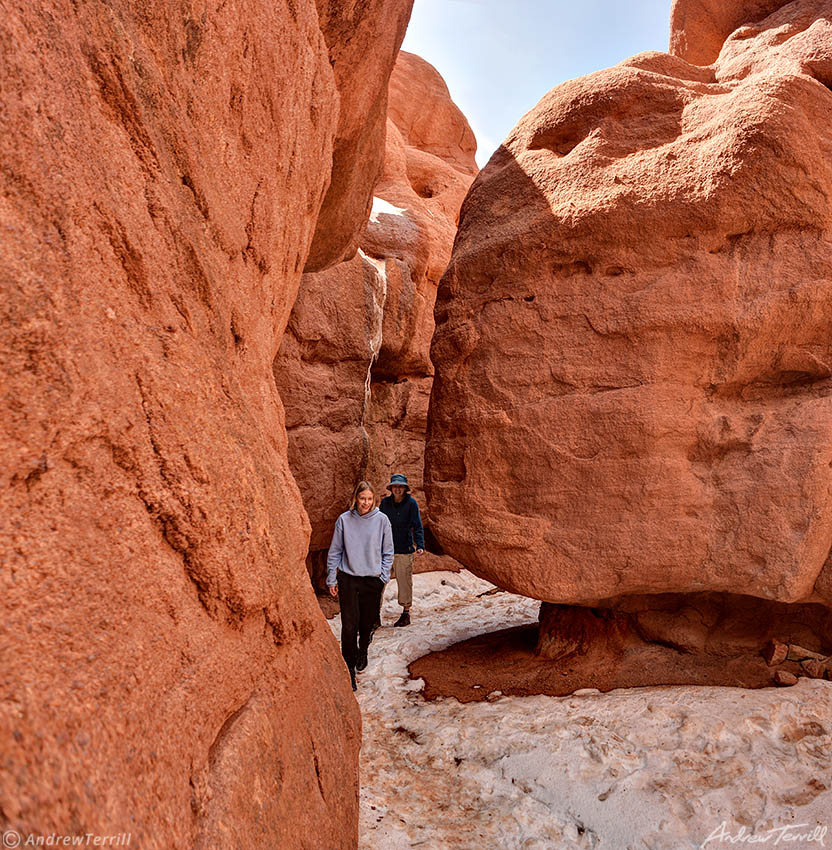 Entering a hidden canyon. So many nooks and crannies to explore! 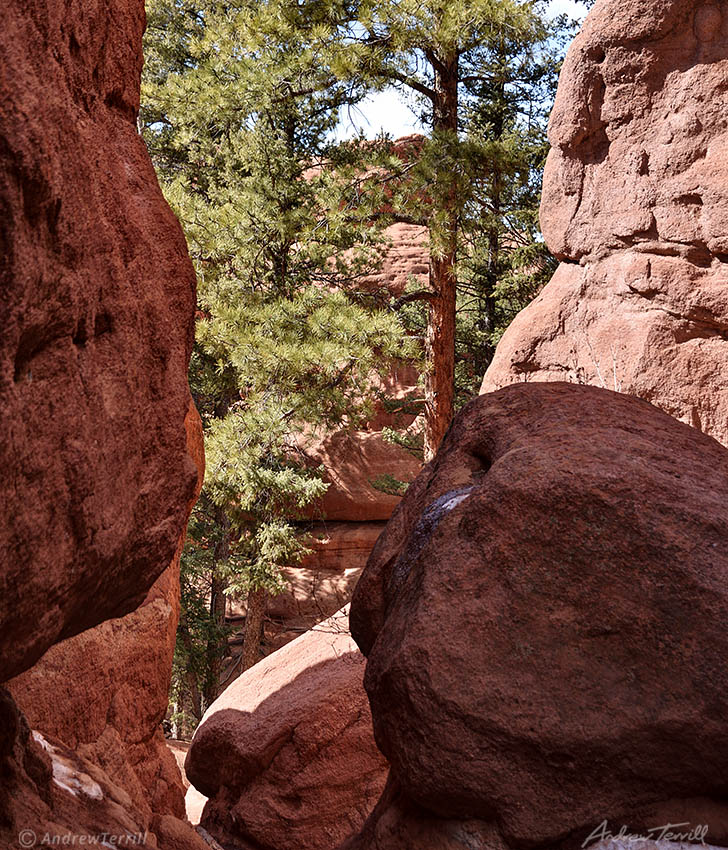 I love the way the sandstone outcrops stand proud among the trees. 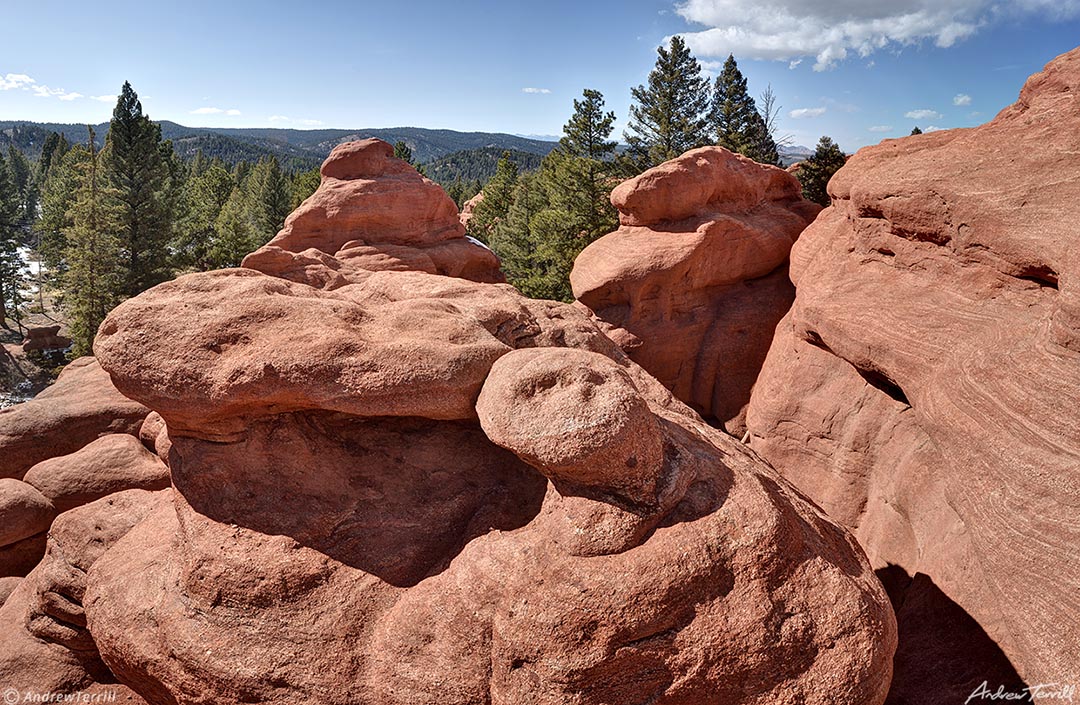 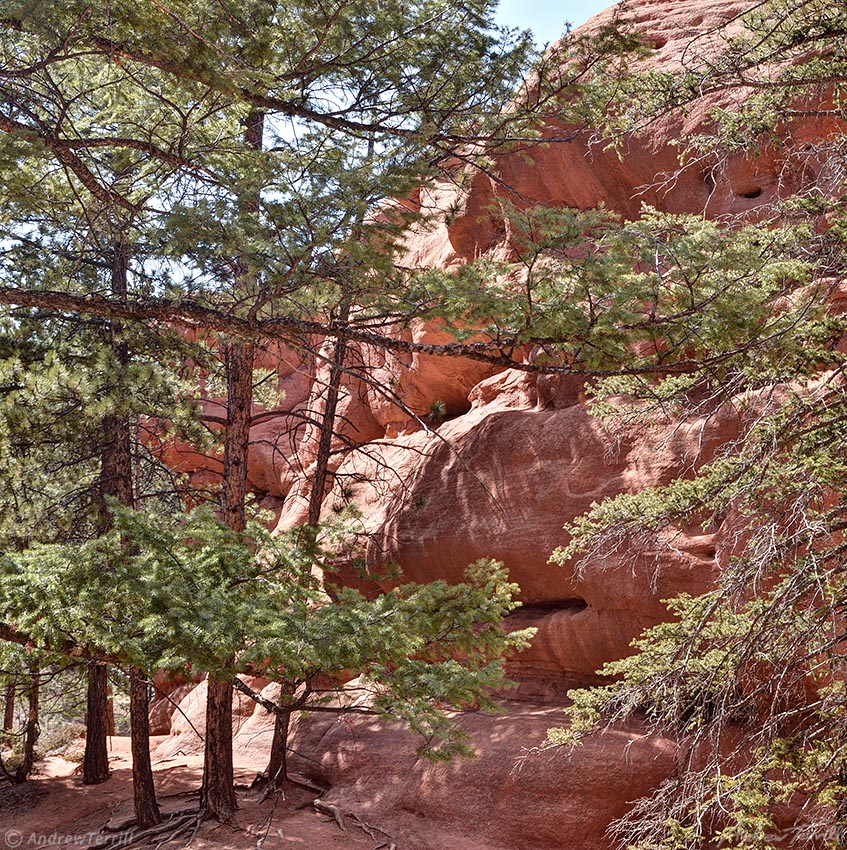 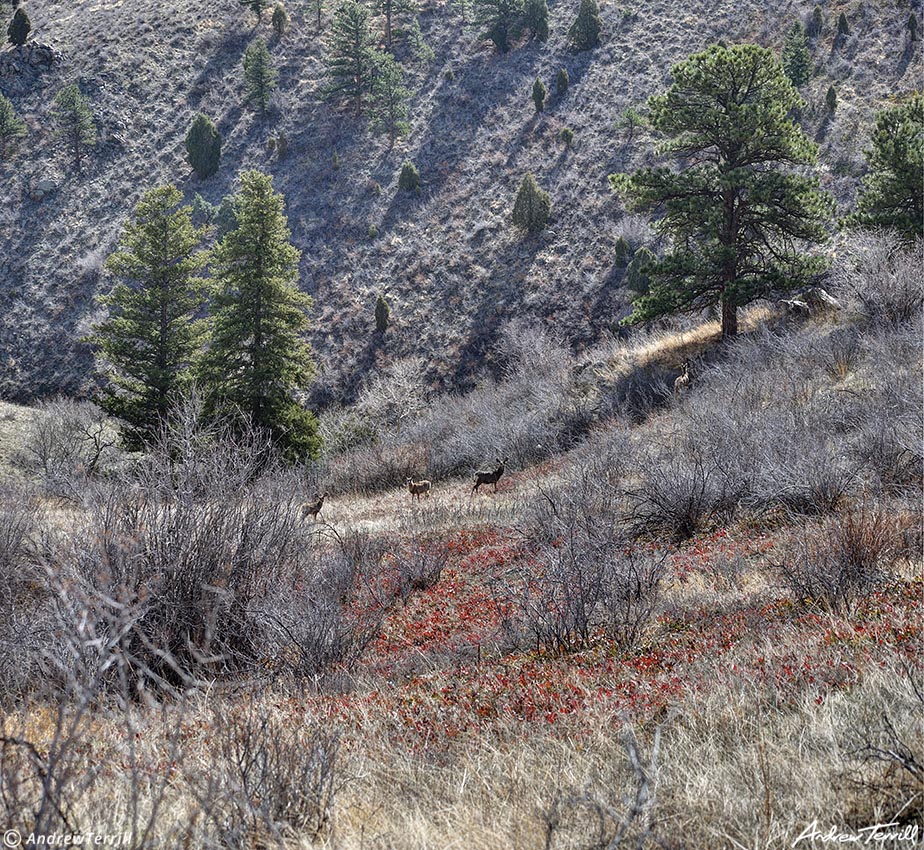 This last weekend, April’s second, was warm in the Front Range – temperatures in the seventies Fahrenheit, twenties Celsius – a glorious taste of spring. I climbed from home into the foothills to celebrate conditions, heading for a new wild corner across untracked ground. 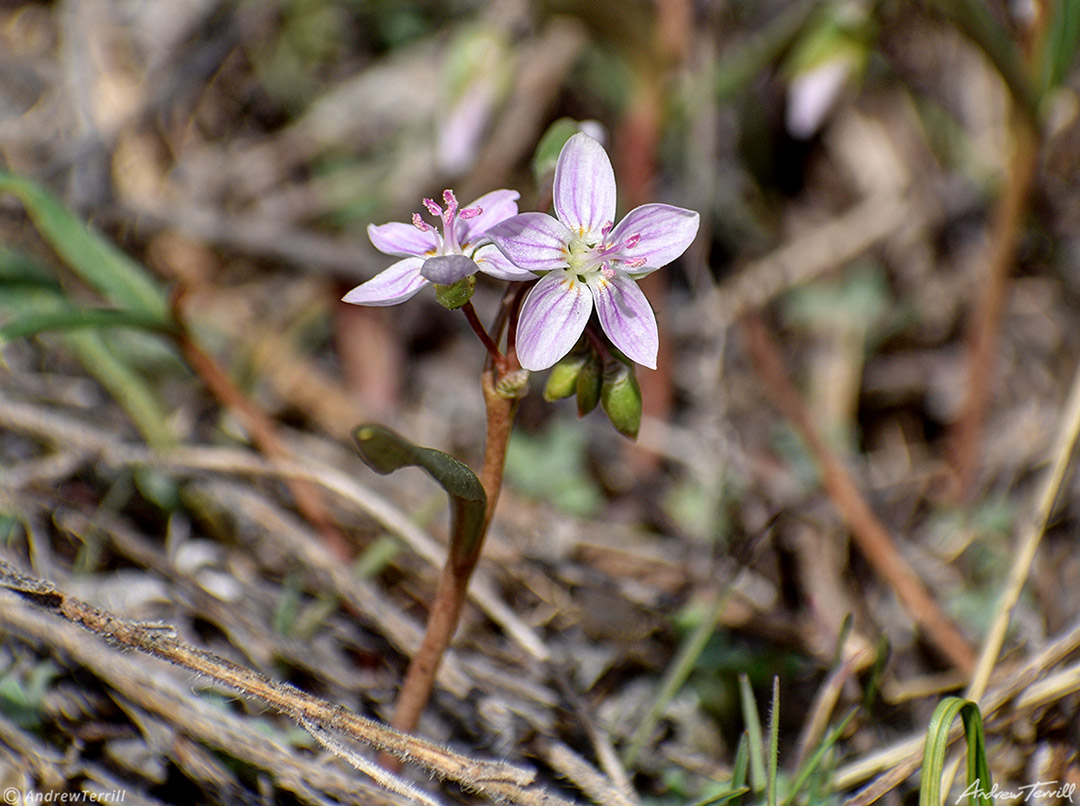 Spring was evident in the wildflowers now emerging. This tiny flower is Claytonia rosea, or Spring Beauty. 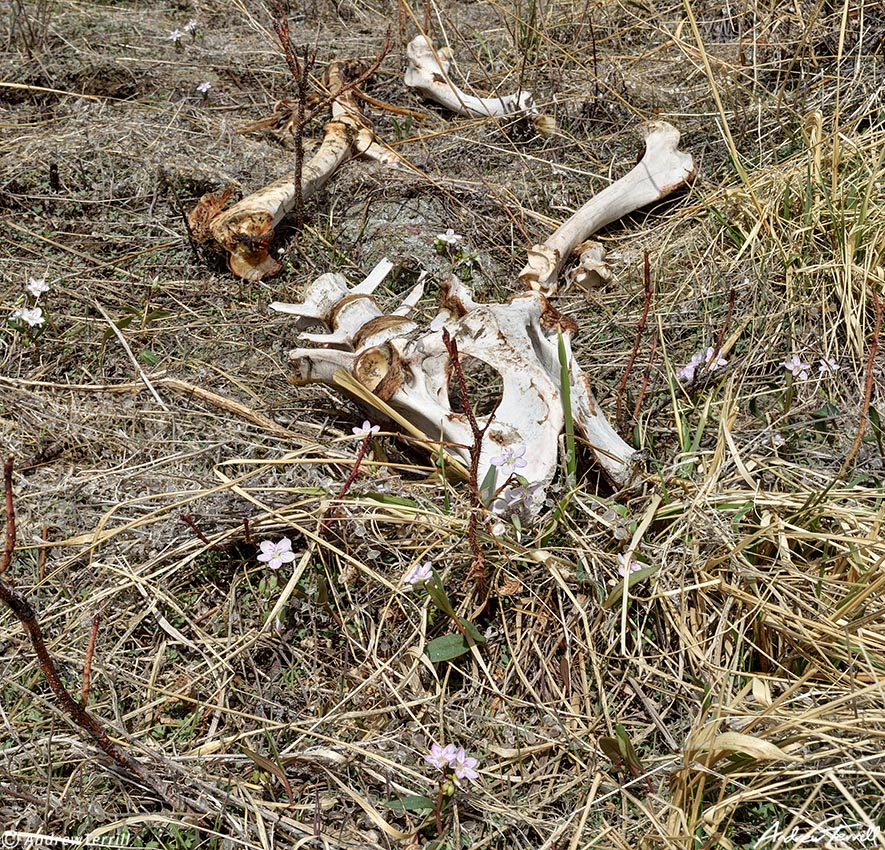 Of course, winter always takes a toll. But the juxtaposition of death and new life was striking, thought-provoking, reassuring. 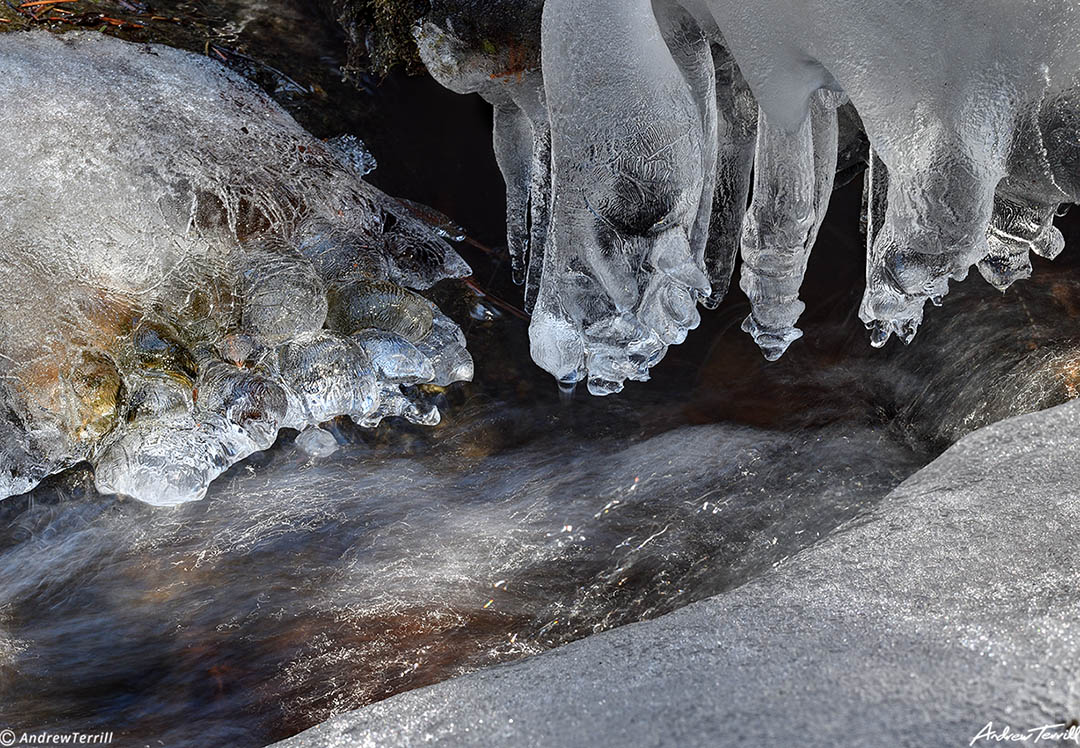 Up in the foothills, deep in a valley beyond the sun’s direct reach, winter hasn’t quite relinquished its grip. 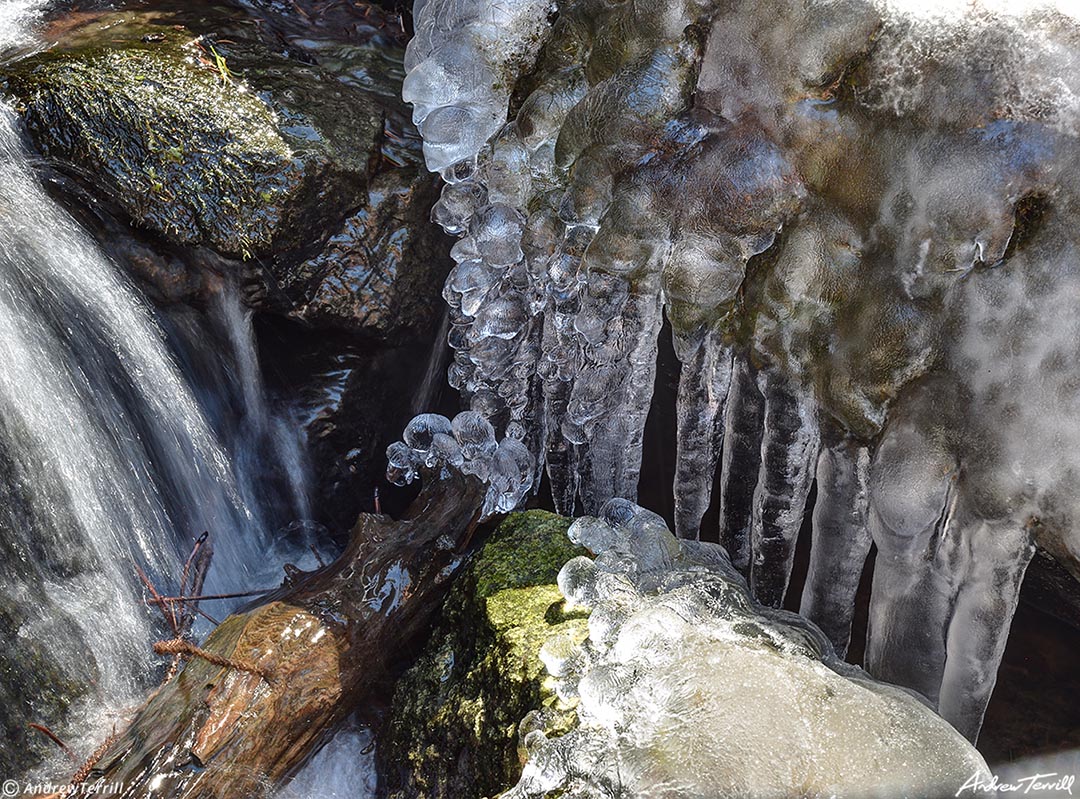 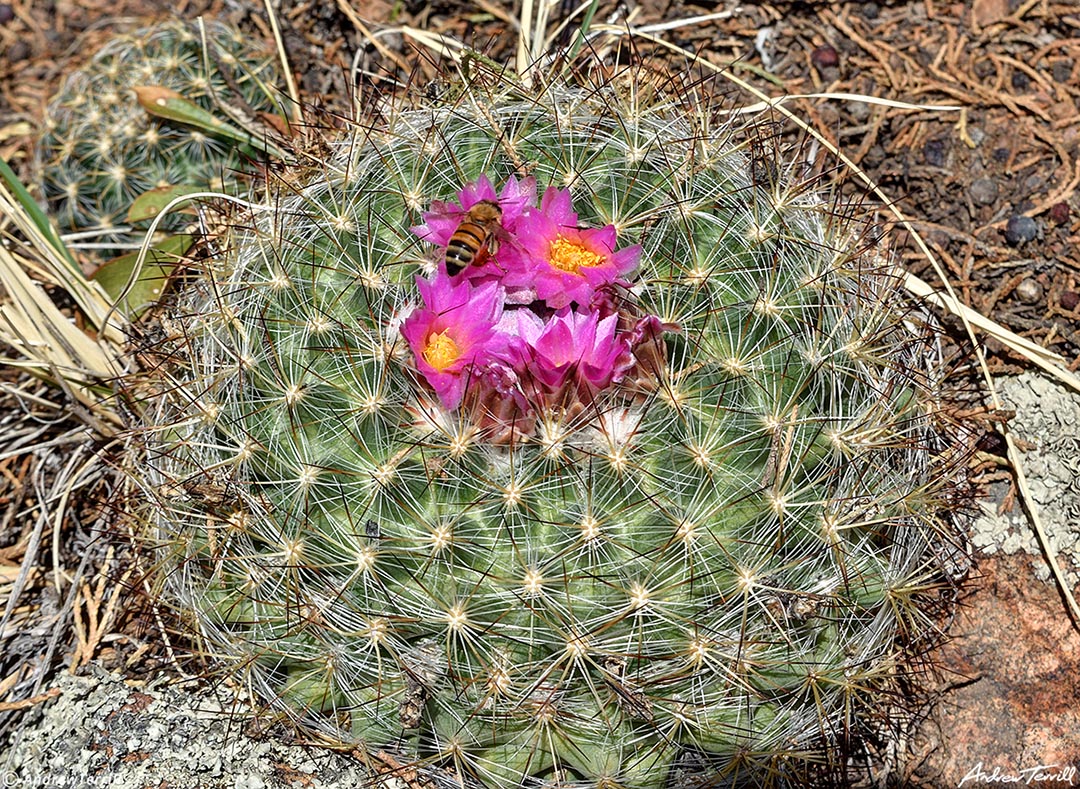 In contrast, on sunny slopes, spring almost felt like summer. April 9th is the earliest I’ve come across a ball cactus flowering here in the Front Range. 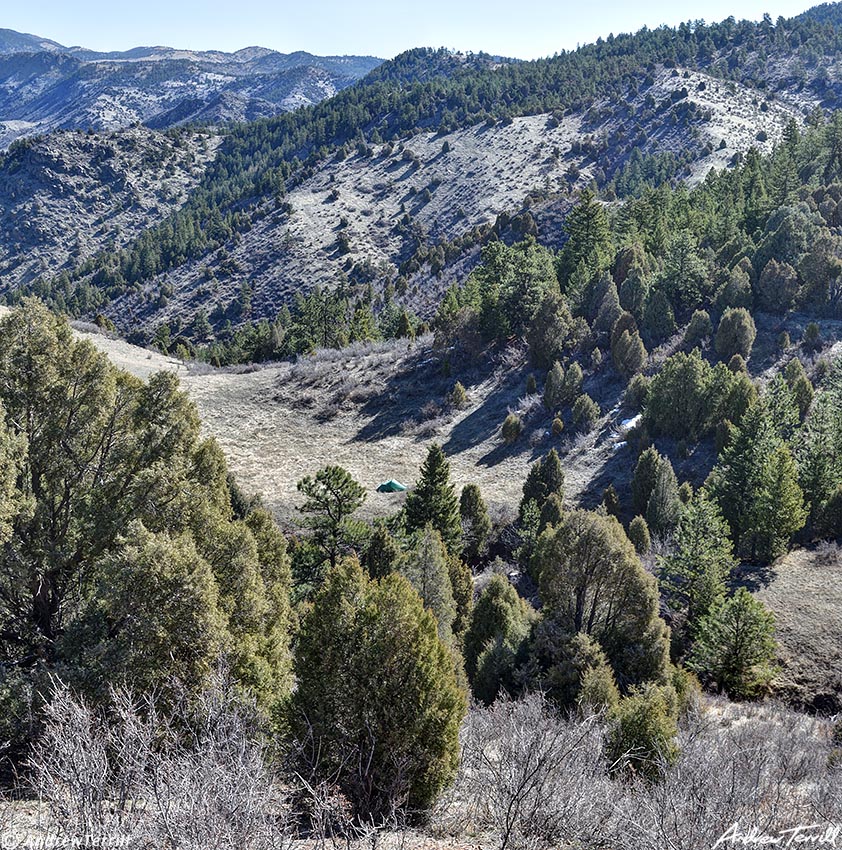 I made camp in a hidden bowl I named ‘The Retreat’. 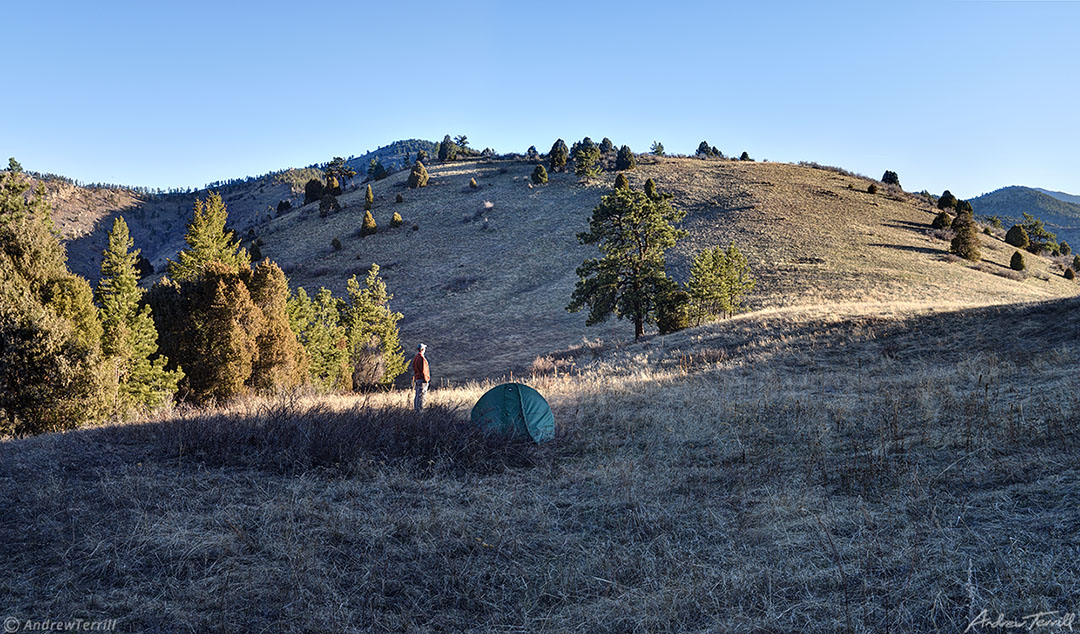 It was a special place to while away a long afternoon and evening. I made sure to tread gently, to leave no trace of my stay, always an essential thing to do on every trip, but somehow even more essential here in a spot that few people (if anyone) ever visits. 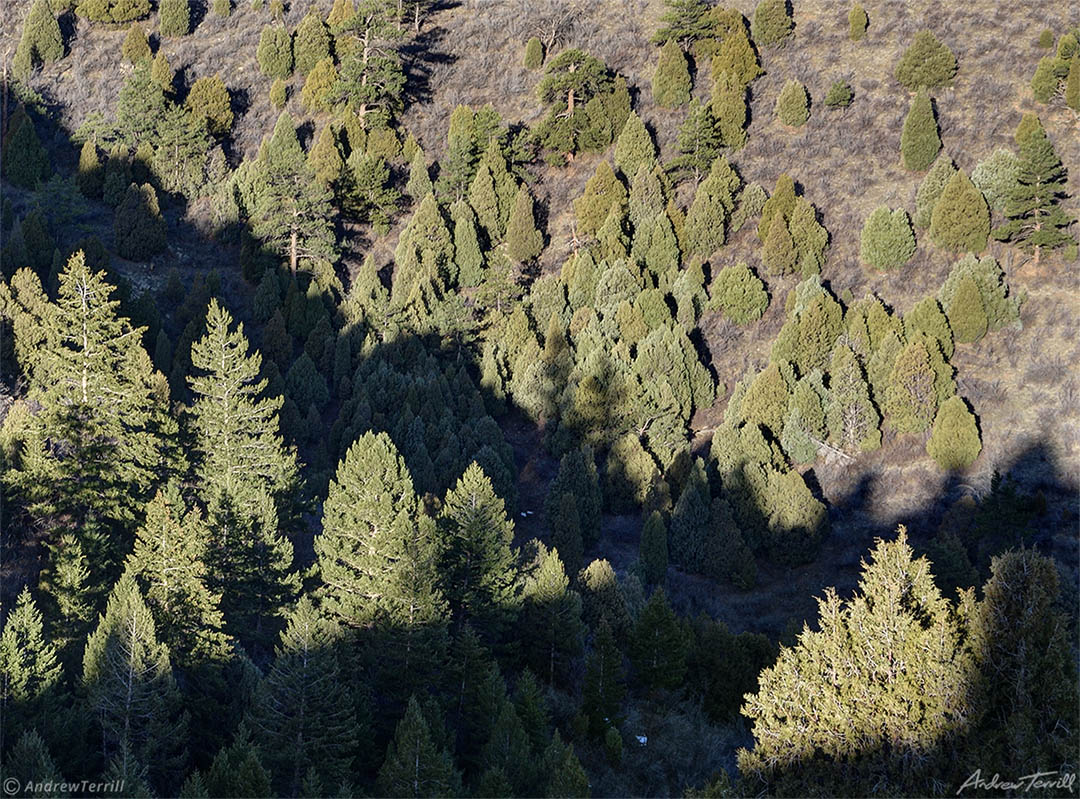 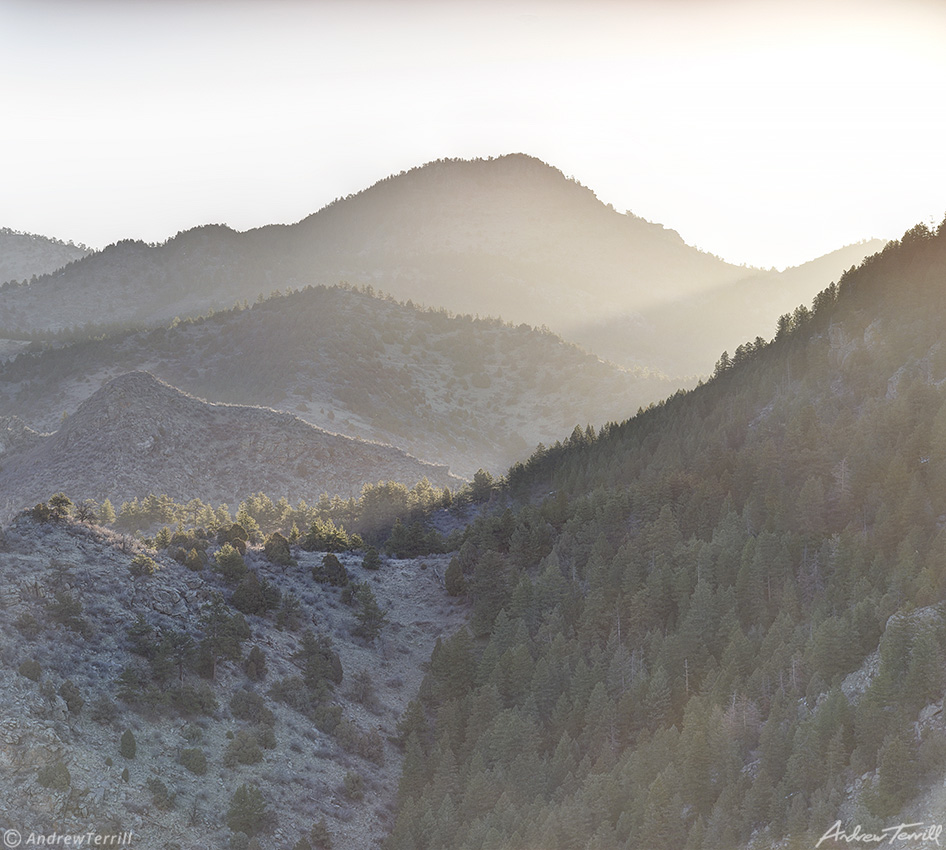 Sunlight streaming across the rugged foothills. 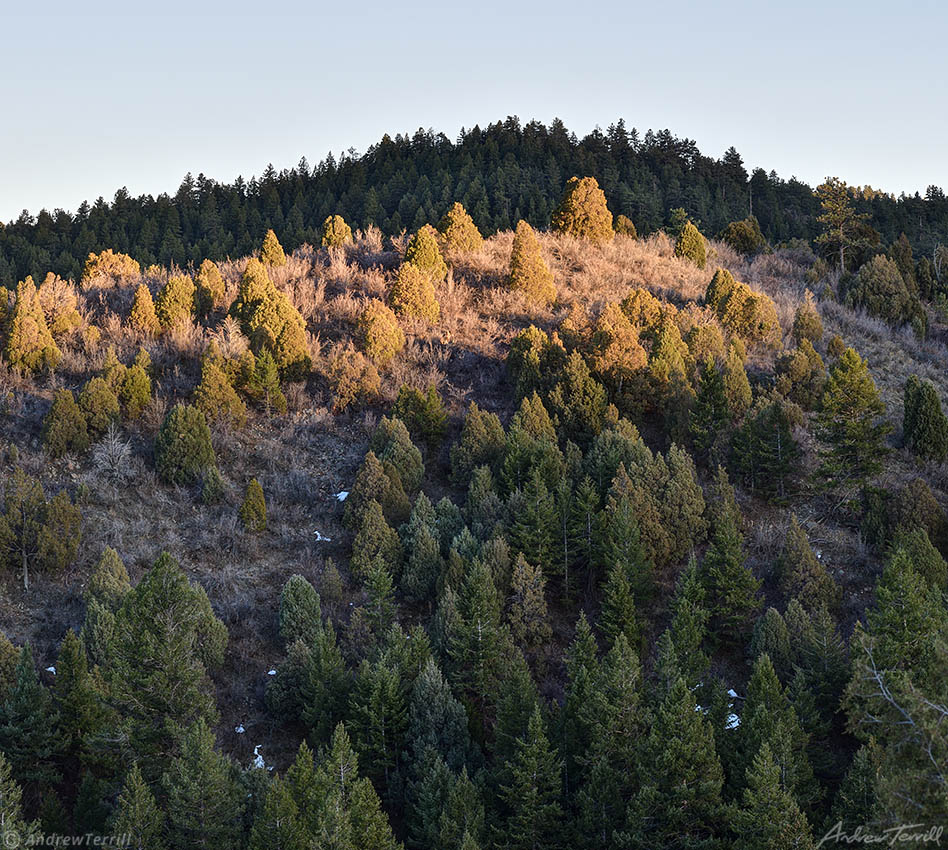 A last burst of light upon a hilltop. By this point, I was singing inside! 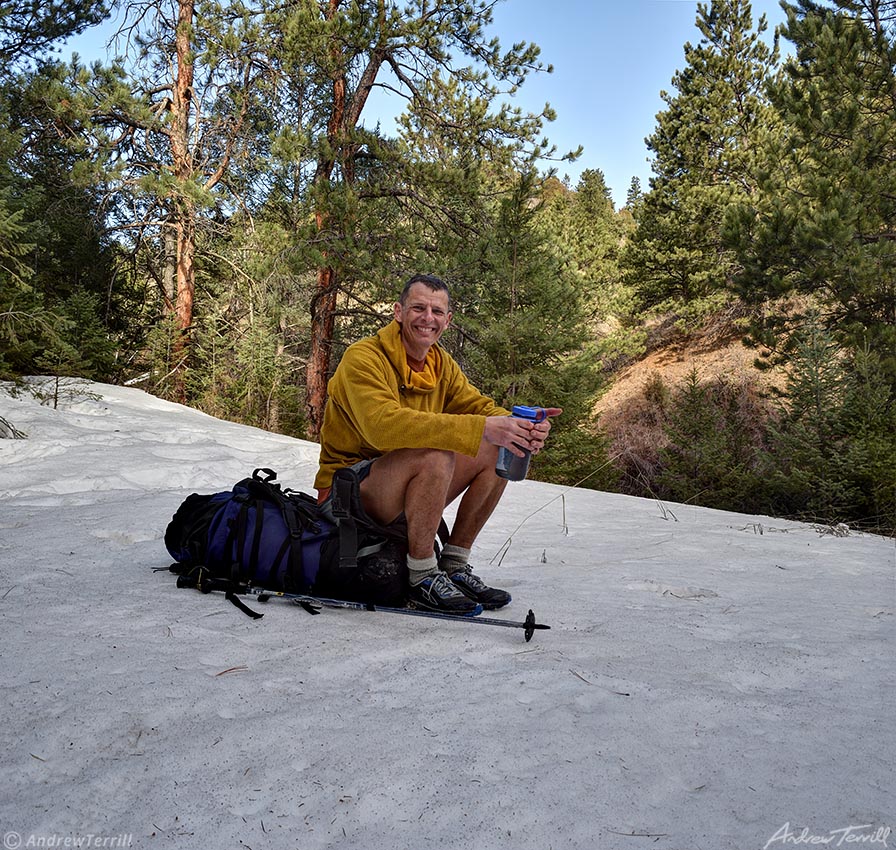 Warm weather and a smile on the walk out, but a pocket of deep snow hints that winter isn’t yet done. The forecast this week confirms it – Colorado’s Front Range is due another round of snow…

PrevPreviousAnd then the snowdrift tried to eat me!
NextA Brief UpdateNext
Scroll to Top