The Earth Beneath My Feet – A guest review by George Kitching 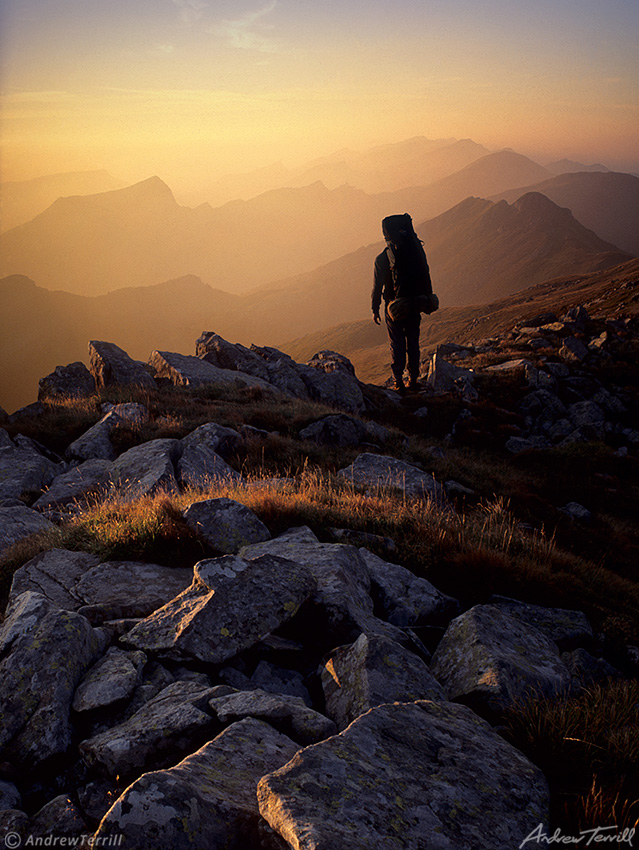 When Andrew Terrill’s ice axe hit a bump and flew from his hand, he lost his only hope of self-arrest. As he hurtled headlong down the precipitous slope of the Hohtürli Pass like “a rag-doll on the way to oblivion”, he realised this is how it feels to die. Yet miraculously, he didn’t. As he lay recuperating in hospital, he made a life-defining decision—to stop using mountains as an escape from work. Many might have come to a similar conclusion, but with a wholly different interpretation. You see Andrew hadn’t decided to give up mountains, he’d decided to give up the soul-sapping pursuit of money and status. From now on, work would be a temporary means of funding expeditions. He’d been given a second chance to live. He meant to use it. Successive summers spent crossing The Alps and The Pyrenees confirmed his conviction that this was what he was born to do, but they also whetted his appetite for something bigger—a journey that would become a way of life. He hatched a plan to walk from Italy’s southern tip to Norway’s North Cape—a journey of 7000 miles that would take him eighteen months. The Earth Beneath My Feet covers the first eight. It is an exhilarating adventure beset by all kinds of obstacles: from the searing Calabrian heat to the biting Alpine cold; from roaming packs of snapping dogs to a nocturnal near-encounter with a bear; from the sottobosco—the dense, impenetrable undergrowth that chokes much of the Apennine woodland—to the friendly Mafia enforcers who block his path into the woods and politely insist he must find another way.

Andrew’s journey is an emotional one every bit as much as a physical one, dogged initially by frustration at how far the reality differs from his expectations, and by an intermittent sense of fear that he mistakes for weakness. As he transforms from an introverted boy from Pinner into Mad Mountain Jack, he learns to embrace these wild landscapes for what they are, and to trust fear as an invaluable primal instinct.

Knife edge arêtes are not only to be found underfoot, Andrew’s journey takes him along the thin divide between the ecstatic liberty of solitude and the gnawing hunger of loneliness. These emotions are variously amplified by his encounters with people: the dumbfounded Calabrians, perpetually asking “Dove Vai?” (where are you going); the mountain shepherds who exude the deepest contentment, gloriously free from all modern comforts; the brief reunions with family that induce aching homesickness; and Graziella and Flavio who steal his heart, then break it with a tale guaranteed to raise a tear (unless your heart is harder than The Dolomites themselves).

Terrill is a fine writer who evokes every nuance of his journey in vivid detail. As readers, we can almost smell the beech woods and the wild flower meadows, almost taste the pure mountain air. We share his elation on the summits, his hopes and concerns about ecology, his exhilaration and self-doubt, and his dogged determination to press on whatever hurdle lies in the path.

The Earth Beneath My Feet takes us to another Italy and another Austria, far removed from the tourist honey pots of the Amalfi Coast, Florence, Rome, and Lake Garda, but it takes us inward too, to re-examine our priorities, our life-choices, and our relationship with the natural world. It leaves us wanting one thing—to get our hands on a copy of the soon-to-be published sequel, On Sacred Ground, and set our sights for Norway.

PrevPreviousA Brief Update
NextOut on September 1st: the hardback edition of The Earth Beneath My Feet.Next
Scroll to Top