On Sacred Ground – an early review 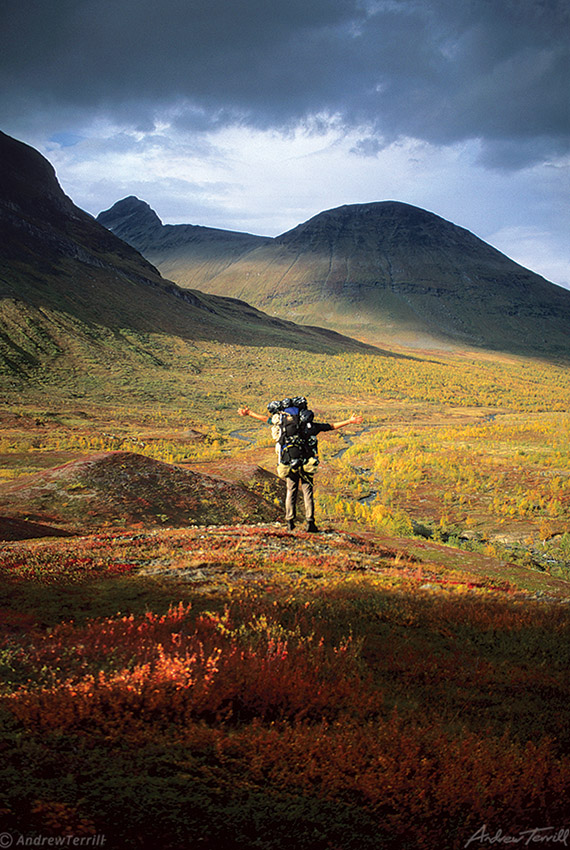 If you haven’t read The Earth beneath My Feet and need an introduction to On Sacred Ground, or are unsure whether or not it’s worth your time, here’s an early review that might help. It was written for the September/October 2022 issue of Lakeland Walker magazine by John Manning. It does contain a few minor ‘spoilers’, although nothing serious that will ruin the story, but if you are undecided and want an early opinion then please read on… 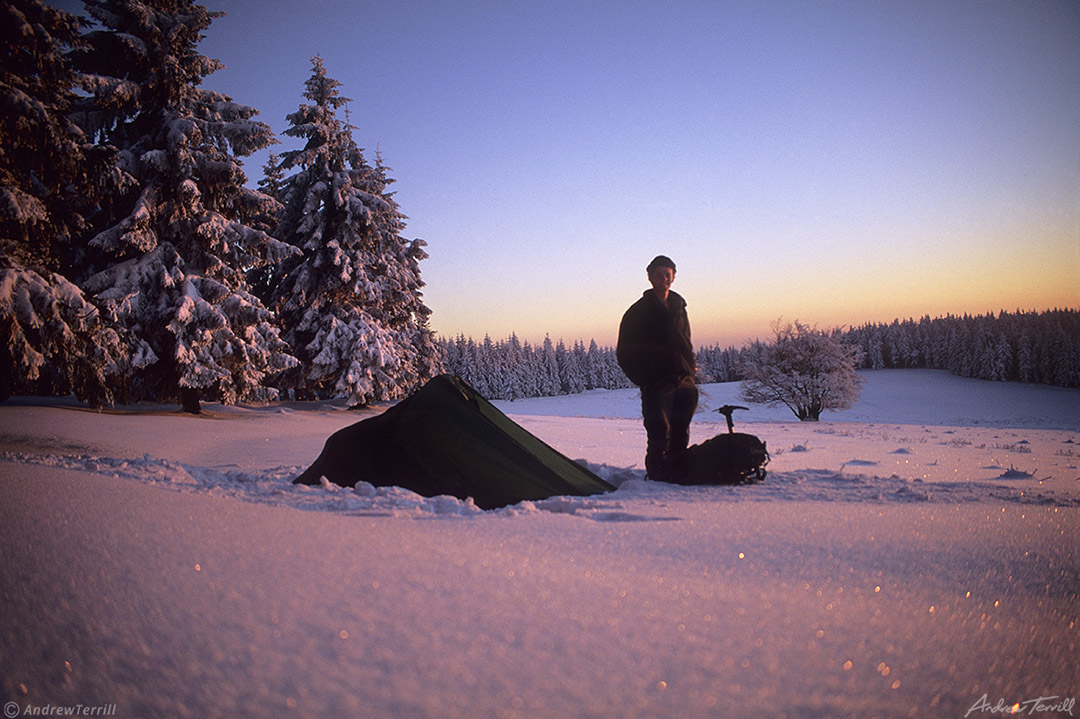 ONCE IN A GENERATION, a writer distils the essence of backpacking into a book that enfolds the reader in the author’s mindset, transporting them to the very landscape through which they are travelling, conjuring up the sounds, smells and even the mud and snow through which they tramp.

A dog-eared copy of Colin Fletcher’s The Thousand Mile Summer once did it for me, planting the seed for my 2,650-mile walk along the Pacific Crest Trail. Years before, Eric Newby’s A Short Walk in the Hindu Kush lured me to the Himalaya, while Andrew Stephenson’s Kiwi Tracks helped fuel my desire to tramp some of New Zealand’s Great Walks.

On Sacred Ground is in that league: a modern backpacking/travel classic: I can’t recommend it highly enough. The book, along with the preceding, equally brilliant volume The Earth Beneath My Feet, cover Andrew Terrill’s 7,000-mile, trans-Europe odyssey, undertaken between May 1997 and October 1998, on which he walked from Melito di Porto Salvo in Calabria, the southernmost tip of mainland Italy, to North Cape, the northern edge of Norway. 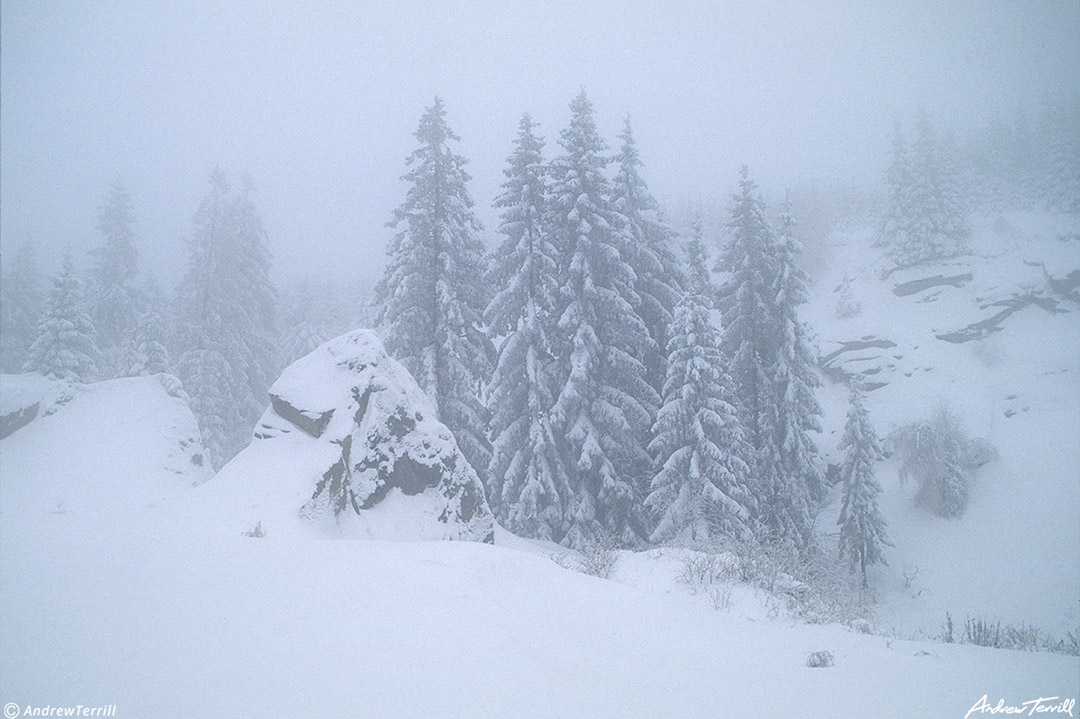 If you’ve read the first volume, On Sacred Ground picks up right where you’d want it: out in the wilds, snow falling as Terrill strides through a mountain forest. He’s stating his place as a long-distance walker, living a life chosen, unbound by expectations and thrilled by the endless possibilities ahead of him. Terrill walks not to get somewhere but to be somewhere, to lose himself in the wonder of Nature, resting where he finds a wild site to which he feels he belongs. Behind him lie the Apennines and most of the Alps; ahead is Upper Austria, the Central German forests, the Czech Republic, Denmark’s North Sea coast and, ultimately, “The Prize”: wild Arctic Norway.

The young Terrill turned to mountains – the seeming antithesis of the London suburb of Pinner in which he was raised – as a place he could relax and wander without fear of the teasing over a stammer that he’d experienced all his life. It all helped make him the solitary, independent sort that’s perhaps ideally suited to a trip of this magnitude. Throughout On Sacred Ground, the reader shares the journey’s vivid highs and lows; the natural splendour of the landscape, of course, but also the inevitable periods of loneliness – especially at Christmas – moments of self-doubt, and the incredible resilience demonstrated: it’s clear that Terrill is one of life’s optimists, able to bounce back from instances that might crush another backpacker. 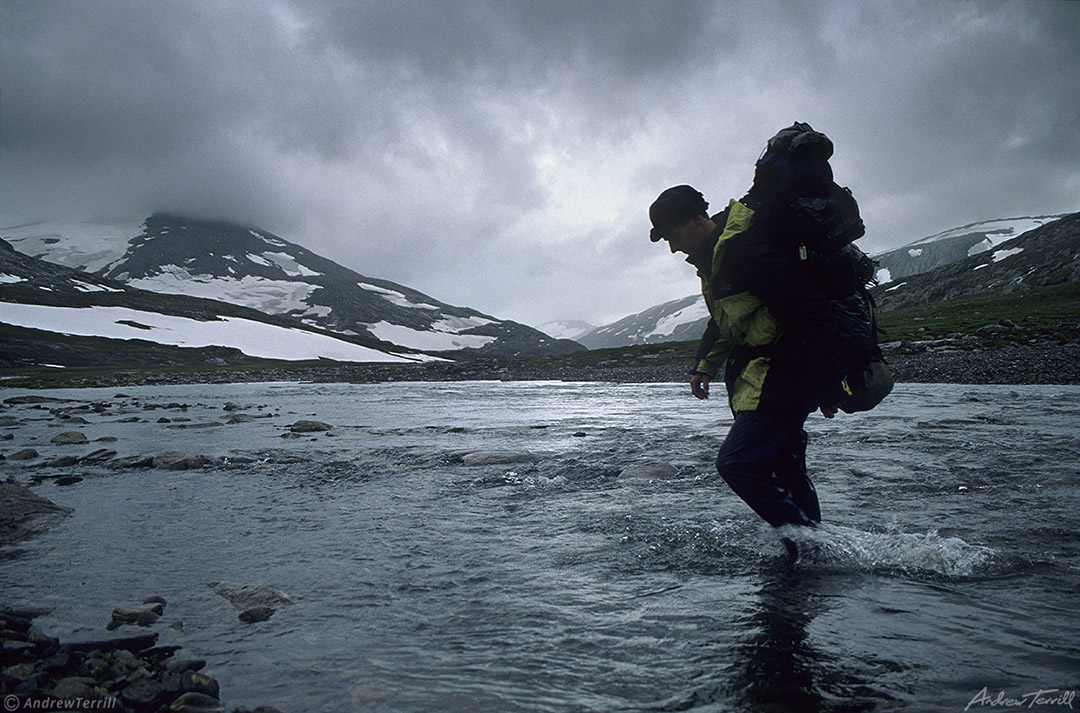 Like Fletcher before him, he intimately captures the spirit of the activity: cold mornings when the temptations of the sleeping bag are too great; damp mornings when the tent floor must be wiped dry; the camp-cook routine that becomes second nature whatever the weather. Like acclaimed author and conservationist John Muir, Terrill never ceases to be amazed by the landscape: every day is filled with wonder and awe, as though each is his first among the mountains.

During his trans-Europe journey, a philosophical Terrill questions “What is wild?” and discovers answers that only such a journey could provide: a state of being; a natural order; the natural world’s ability to endure despite the influence of the parallel human world. On foot, in the wild, he succeeds in escaping barriers imposed by an urban world to find his natural place in the order of things. Walk alone into wild mountains such as those of Norway, Terrill suggests, and you come face to face with yourself, become humbler for it. Terrill communicates vividly not only about the landscape through which he passes but also what he finds out about the world and himself. 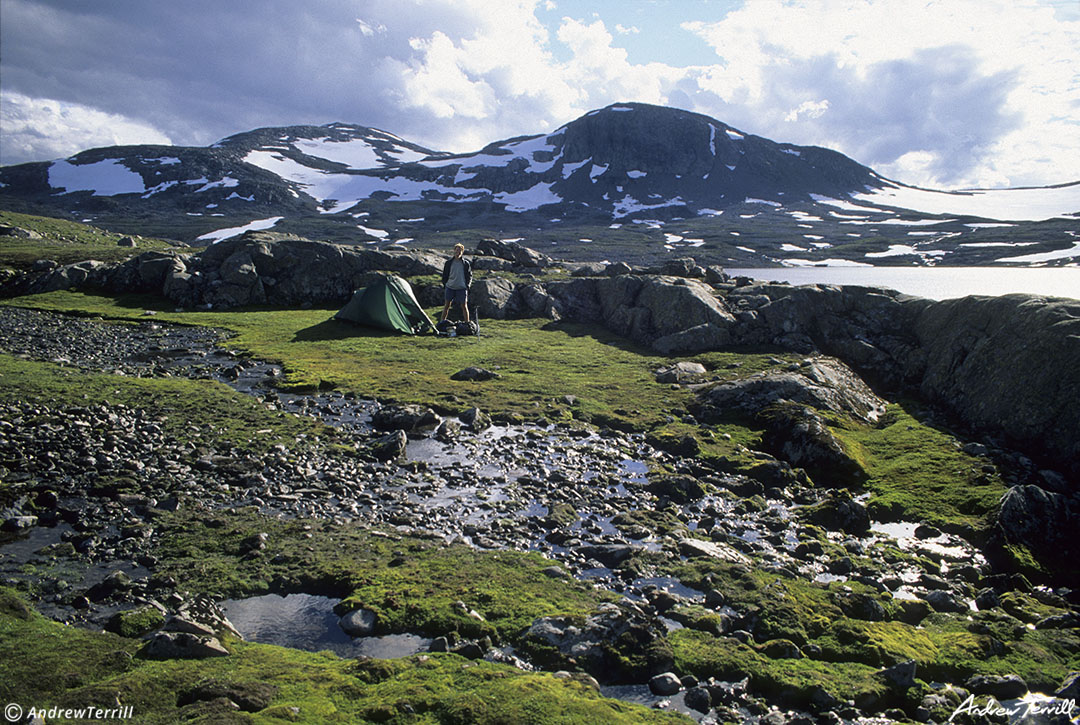 Despite the solitary nature of his journey, his journey is enriched by the settlements he visits, and the generosity of those he encounters (I particularly enjoyed his encounters along the non-mountainous Danish coastline, for that very reason). Asking for help, he realises, isn’t a failure to stand on his own two feet, and the book goes a long way to restoring faith in out fellow human beings. The lessons learned are lessons for life, shared with the reader humbly, generously, and without preaching.

The book is packed with adventure, drama, wildlife – reindeer, moose, fox and more – and humour, much of it self-deprecating but also much born of the moment. He anthropomorphises much of his gear: his backpack is “Ten Ton”; his ice axe, never far from his side, is “Excalibur”; his tent starts the journey as “The Blob” but becomes “Auld Leakie”. 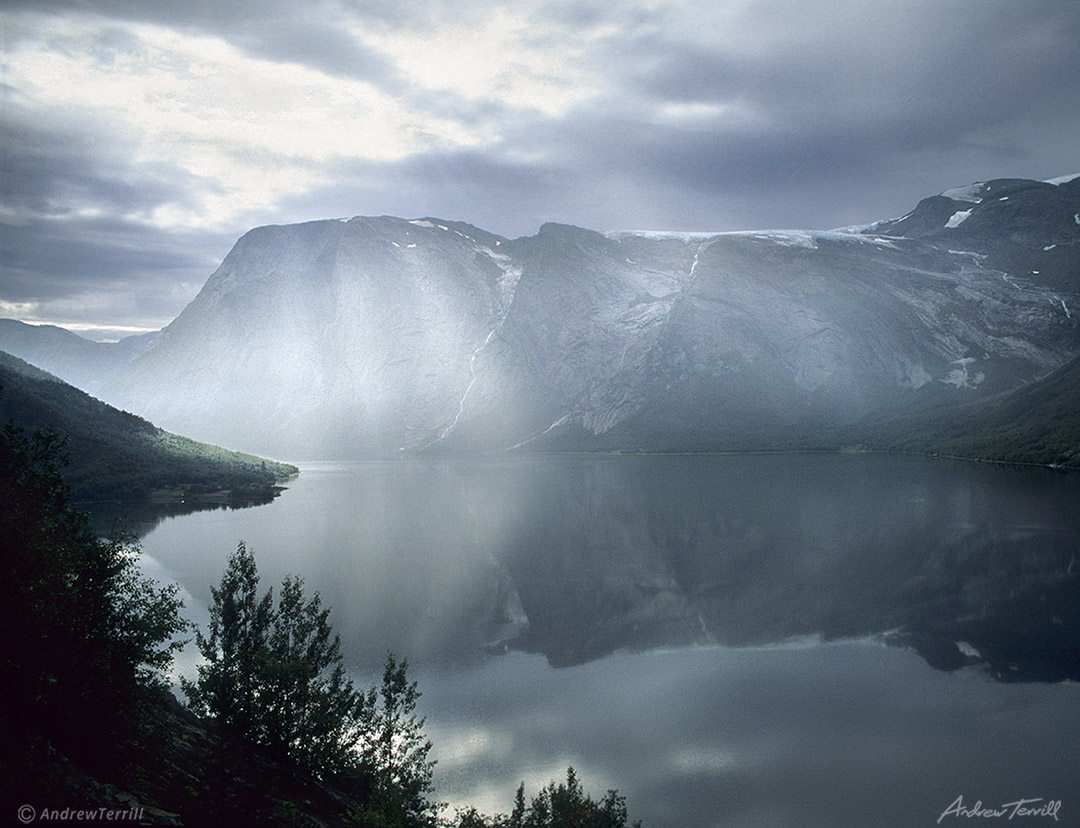 For the purposes of this review, I was sent a pre-publication PDF (and in the interests of transparency, I’m credited as a beta reader) but I cannot wait for the print edition so I can accompany Terrill on his journey once again – only this time, I’ll be reading the book in my tent, out in the wild. 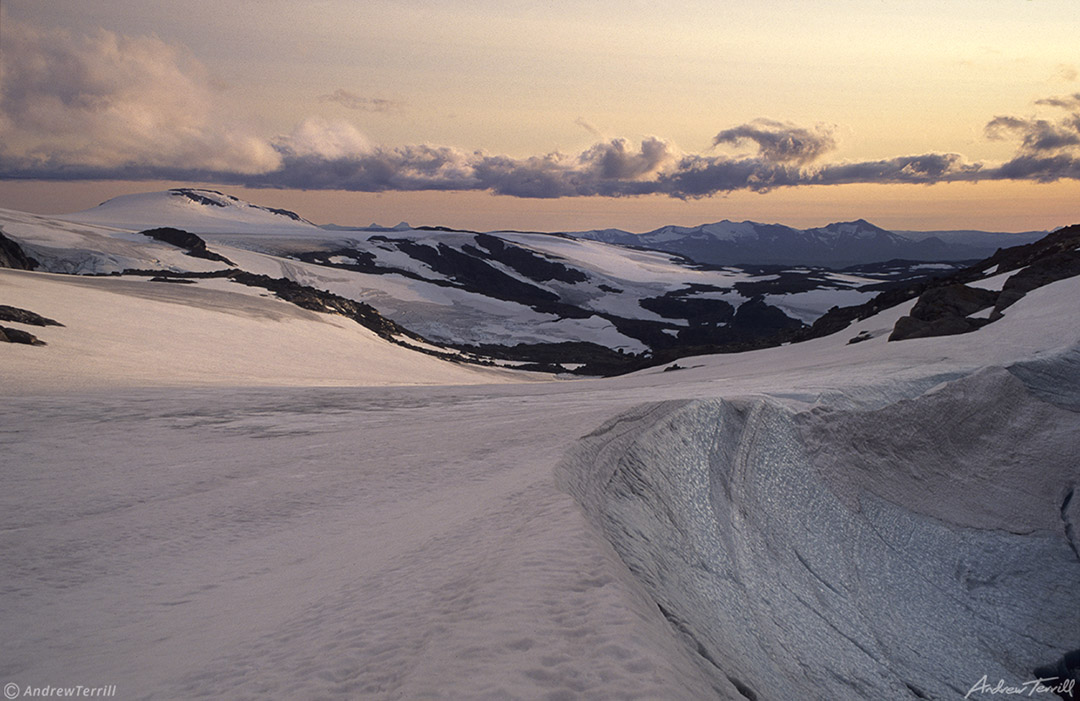